While DeSantis' pandemic response may help for a presidential run, it's fuel for his critics back home

Florida is now responsible for a third of all new COVID cases. 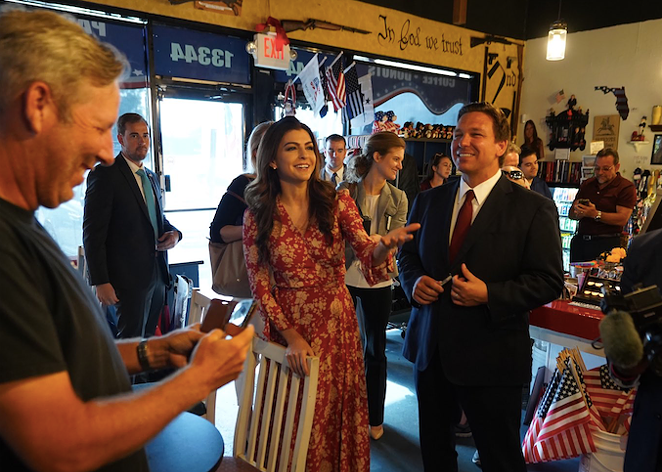 No mask mandates in classrooms. No vaccination “passports.” And no more business shutdowns.

Gov. Ron DeSantis’ management of COVID-19 has boosted his countrywide cachet among fellow Republicans as he seeks re-election to the governor’s mansion next year and mulls a run for president in 2024.

But the governor’s insistence on staying the course amid a skyrocketing number of infections --- as of Monday, Florida had the highest COVID-19 hospitalization rate in the nation --- is drawing fire as Democrats point the finger at the Republican incumbent.

Elected officials’ attitudes and actions about masks and vaccinations have become a flashpoint in the increasingly tribal nature of partisan politics. The ideological schism over preventive protocols in Florida has aided DeSantis’ rise as a national presidential contender and, at the same time, become a cornerstone of Democrats’ efforts to oust him.

“I think it’s gross politicization, and I think it’s shameful, and I think it’s based on a guy who’s got his eyes on the Republican nomination in ’24 instead of the governorship and the people of Florida in ’22. Clearly, that’s it,” Congressman Charlie Crist, a St. Petersburg Democrat who is running to try to unseat DeSantis next year, told The News Service of Florida during an appearance in Tallahassee. Crist served as governor as a Republican before becoming a Democrat and losing a 2014 gubernatorial bid.

DeSantis, however, isn’t backing down from his largely laissez-faire approach, even as the highly transmissible delta variant of the novel coronavirus tears through the Sunshine State.

“We are not shutting down,” DeSantis told reporters Tuesday. “We are going to have schools open. We are protecting every Floridian’s job in this state. We are protecting people’s small businesses. These interventions have failed time and time again throughout this pandemic, not just in the United States but abroad. They have not stopped the spread, particularly with delta.”

With DeSantis focused on an economic rebound, Agriculture Commissioner Nikki Fried, who is running against Crist for the Democratic gubernatorial nomination next year, has assumed the mantle of the state’s chief COVID-19 information officer. She has been holding news conferences to discuss data on Florida’s infection rates and hospitalizations and using social media to blast DeSantis’ approach to the pandemic, such as his issuance of an executive order to block school districts from requiring students to wear masks.

“We stand in unity with our local school boards who have the constitutional power to protect our children and won’t be bullied or defunded by our wannabe authoritarian governor,” Fried tweeted on Wednesday.

DeSantis made national headlines last week when he issued the executive order, which came after he mocked federal Centers for Disease Control and Prevention recommendations during an appearance at the conservative American Legislative Exchange Council’s annual meeting.

"We say no to lockdowns, no to school closures, no to restrictions, and no mandates,” DeSantis said at the Salt Lake City event, adding that people “should not be consigned to live … in a Faucian dystopia."

DeSantis has made Anthony Fauci, a widely respected infectious-disease expert who has been part of the White House’s COVID-19 advisory team, a frequent object of scorn. The governor’s political committee, for example, is capitalizing on Republicans’ animosity toward the veteran public-health official through the sales of merchandise emblazoned with messages such as “Don’t Fauci My Florida.”

DeSantis’ wrath isn’t limited to the 80-year-old doctor, however. The governor has adopted a similarly combative stance with the CDC --- he sued the federal agency for refusing to lift restrictions on cruises --- and President Joe Biden’s administration.

But with Florida and Texas responsible for a third of the COVID-19 cases in the U.S. last week, the White House is punching back. Biden on Tuesday blamed DeSantis and Texas Gov. Greg Abbott for “bad health policy” amid the spikes in the two states.

“I say to these governors, please help,” Biden said. “If you aren’t going to help, at least get out of the way of the people who are trying to do the right thing. Use your power to save lives.”

Critics accuse DeSantis of pandering to GOP base voters --- who turn out in large numbers for primaries --- on issues such as face masks and his reliance on scientists and data considered to be outliers in the medical community.

But skepticism about masks and vaccines isn’t limited to Republicans, GOP political consultant Anthony Pedicini said in a phone interview with the News Service.

“Inherently, Americans don’t want the government to tell them to do anything,” Pedicini said. “Honestly, the very essence of who we are as Americans is manifest in this mask debate.”

“It tears at the fundamental of who we are as Americans. We love freedom. The government shouldn’t ever tell us what to do.

The governor in Florida is not telling anybody they can’t wear masks. So if you feel uncomfortable or you feel like this is a life-threatening thing to you, put the mask on, put the mask on your kids and go about your day,” said Pedicini, who had COVID-19 in November, received a vaccination this year and is urging others to get the shots.

DeSantis has advocated for the use of vaccines but, unlike some other GOP governors in states experiencing increases in COVID-19 cases and hospitalizations, has not pushed Floridians to get the shots. Roughly half of eligible Floridians are not fully vaccinated.

“Should the governor of the state of Florida be an activist? Yeah. And I think he is, in that he’s taking the side of freedom,” Pedicini said. “I think that has served him fairly well politically.”

With most recent polls showing DeSantis the frontrunner in the governor’s race, the Republican leader “feels strongly that he’s going to win re-election” and is “looking to the next game, which is clearly the presidential game,” political consultant Steve Vancore, who advises Democrats, said in an interview.

“You’ve got to be the most conservative, the most pro-Trump Republican of the field, and as such, he seems to be sticking to a script that is custom-tailored for his far-right base. There’s no part of Ron DeSantis that’s playing to the middle. He’s playing to the base at every step of the way,” Vancore said.

COVID-19 health-care protocols are being “used as a political pawn because our governor and others have found that it’s a political tool, while Floridians are dying or getting sick and people all over the country are,” U.S. Rep. Val Demings, a Democrat who is trying to unseat Republican U.S. Sen. Marco Rubio, said in an interview.

“Why can’t we just listen, our governor and others, be led by the science, be led by information coming from medical experts, follow their guidelines?” she said. “I really wish this issue would not be politicized, but it has been from the very beginning.”