Will Florida usher the Equal Rights Amendment into the U.S. Constitution?

It could be the beginning of a new, um, ERA. 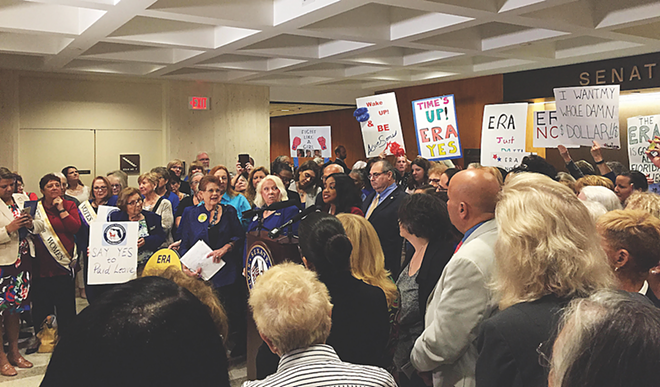 Wouldn’t it be wonderful for Florida to do something positive that we could be proud of? Wouldn’t it be novel if our state’s national profile could be the subject not of mockery but of admiration?

Well, a girl can dream!

America has 37 states which have adopted the Equal Rights Amendment, and Florida could be the 38th, pushing the ERA into the U.S. Constitution. There are currently a number of states vying for this honor — North Carolina, Arizona, Georgia and Louisiana have a shot this year, and Virginia anticipates likely passage in 2020.

So how did an issue that 90 percent of all Americans agree upon get stuck? Like many political tales, this one has a lively back story and an archenemy.

After working hard to secure the vote for women as a suffragette in 1920, Alice Paul pressed to get an amendment on equality into the constitution. Following decades of inaction, the 1960s arrived with the heady energy of change. Bra-burning and calls for women’s rights bestirred suburban matrons and consciousness-raising groups rallied behind the revived Equal Rights Amendment. At just a few words, the amendment simply says, “Equality of rights under the law shall not be denied or abridged by the United States or by any State on account of sex.”

By 1972, both Republicans and Democrats embraced the ERA and it was included in national party platforms and supported by Presidents Nixon, Carter and Ford. Almost immediately, the ERA was adopted by over 30 states, but then its forward momentum ground to a halt — by the enemy of the ERA, Phyllis Schlafly.

A staunch social conservative, Schlafly worked hard to defeat the ERA by stoking the fears of American women. She asserted that if the ERA passed it would result in “government-funded abortions, homosexual school teachers, women forced into military combat and men refusing to support their wives.” This was malarky, but her Eagle Forum spread this propaganda and it rattled the public dramatically enough to stop the ERA cold. Several states even walked back their approvals, and the ERA again entered limbo.

Schlafly coaxed the religious right into the debate, urging their strident opposition to the ERA based erroneously on the question of abortion. She successfully polarized the debate and her legacy of opposition stymied ERA ratification efforts for decades.

Fresh energy sparked by Trump’s election, the Women’s March and the #MeToo movement has breathed new life into the ERA sails. Nevada has ratified the Equal Rights Amendment — roughly 35 years after a deadline imposed by Congress.

Pat Spearman, who led the Nevada effort, felt that the deadline imposed by Congress in the original legislation is little more than a paper tiger.

“It was in the resolving clause, but it wasn’t a part of the amendment that was proposed by Congress,” she tells KNPR. “That’s why the time limit is irrelevant.”

After all, Spearman and others argue, Congress’ original ratification deadline was 1979, and national lawmakers already bumped that forward to 1982 — so what’s stopping them from bumping it forward again?

In 2018, Illinois became the 37th state to ratify the ERA and with one state to go, the national ERA Coalition is revving its motor. One of the most effective, and unlikely, proponents of the ERA barnstorming across the states fighting for its passage is Representative Steve Andersson, an Illinois pro-life Republican. Andersson visited Tampa in early March to help local ERA supporters, including the Athena Society and the League of Women Voters, strategize.  He explained his support for the ERA as a savvy move for a moderate Republican to demonstrate support for equality.

“The Republican Party must be for something, not just against,” he said. “Most Americans, over 80 percent, believe that the ERA is already part of the U.S. Constitution. This issue should be easy, but the opposition insists upon mischaracterizing what it means.”

Andersson explained his strategy in Illinois, which had a Democratic legislature, but needed 10 Republican votes in the house for passage.  He crafted individualized arguments for each representative based on their needs and interests, but he warned that this approach would not be successful in Florida.

“The low-hanging fruit, the states with majority Democratic legislatures, has already been plucked,” he observed. “Florida has too dramatic a gap in the numbers to be able to win over individual legislators.” He advised that the smartest move to get the ERA passed in this state is to convince our new governor, DeSantis, to cast against type and lead the charge.

If Governor DeSantis were to promote the adoption of the ERA, the legislature would follow suit. DeSantis would be a hero on the national stage, lifting his reputation and political profile and reframing our state as forward-thinking. Big business, wary of our current narrative of cluelessness, might reconsider Florida for investment and headquarters.

An ERA press conference held on March 12 in the State Capitol’s rotunda, attended by the usual suspects, felt earnest but limited. A strong push from some high-profile Republicans could reframe the ERA and allow our state to shine.

Stay on top of Florida and Tampa Bay news by subscribing to CL's newsletters.