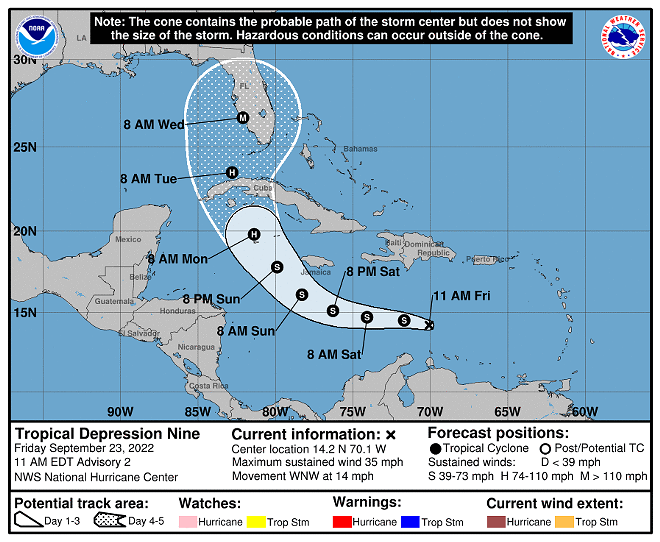 Image via NOAA
Though a lot can change in the coming days, a newly formed tropical depression in the Central Caribbean is expected to form into a hurricane by early next week, and Florida is currently in the cone of uncertainty.

According to the early Friday morning advisory from the National Hurricane Center, the ninth tropical depression of the year formed last night and is currently east-southeast of Jamaica headed west-northwest at 13 mph, with 35 mph winds.

Forecasters expect the depression to strengthen to Tropical Storm Hermine on Friday afternoon, and possibly into a Category 1 hurricane by Monday, as it turns north towards Florida.

The storm could be a Category 2 hurricane by Tuesday, adds the agency.

Tropical Depression Nine has formed in the Central Caribbean Sea. There is still a lot of uncertainty with the forecast for early next week, and the track could change significantly. Continue to monitor the forecast for updates. pic.twitter.com/R1JPklpuZc


The latest track shows the storm making landfall in Florida on Wednesday morning somewhere between the Suncoast and South West Florida, with impacts throughout the state going well into Thursday.

"While it is too soon to determine the exact magnitude and location of these impacts, residents in Cuba, the Florida Keys, and the Florida peninsula should ensure they have their hurricane plan in place and closely monitor forecast updates through the weekend," says the NHC.