And members of the Jewish community are mixed regarding the hurtfulness of the word. 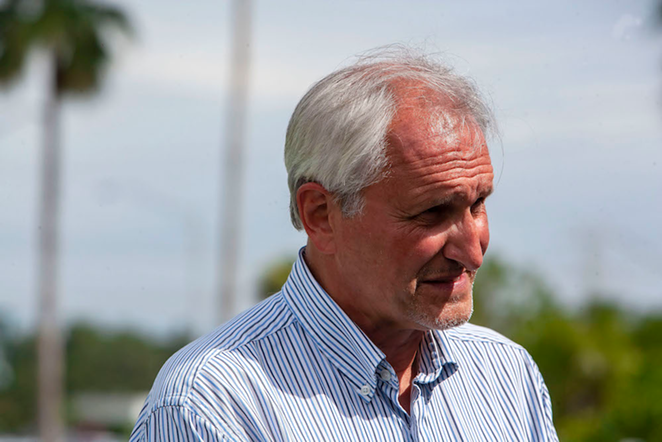 Kimberly DeFalco
Rob Lorei told Creative Loafing Tampa Bay that folks who understand his record at WMNF know he would never use an ethnic slur.

WMNF’s ugly breakup with its co-founder, Rob Lorei, got even messier last week when the community radio station’s board issued a new statement regarding its April firing of the 66-year-old news director who helped start the station nearly 42 years ago.

In a message to station volunteers, Will Greaves—President of WMNF 88.5-FM’s board of directors—accused Lorei of promoting false and misleading statements about the April firing and cited Lorei’s November 2020 use of “an ethnic slur towards a listener from a station email account” as the reason for his termination.

But Lorei told Creative Loafing Tampa Bay that folks who understand his record at WMNF know he would never use an ethnic slur. “I did use a political term in an email to a listener who wrote in to downplay the dangers of the Proud Boys,” Lorei added.

Proud Boys are a neo-facist, right-wing group whose members have been seen wearing shirts that say “6MWE,” which stands for "6 million wasn't enough"— a reference to the 6 million Jewish people murdered during the Holocaust. Just last weekend, members of the Proud Boys marched through downtown Tampa flashing “white power” symbols as part of a march against coronavirus restrictions. NPR says that “so far, 32 members of the group have been arrested and charged with Jan. 6 offenses, more than any other organization,” adding that Proud Boys also have their eyes on local elections across the U.S.

Lorei told St. Pete Catalyst that after several emails, he grew exasperated and told the listener that he was siding with fascists. “I said it in slightly stronger words, but that’s what I said to him,” Lorei explained.

The word Lorei used was “kapo.”

Lorei described the word as a term for “people in concentration camps used to describe people who sided with their captors.” Greaves told CL he did not see it as a political term, adding that, “It was an anti-Semitic racial slur that is highly offensive to any Jewish person.”

“After I was fired I went to the U.S. Holocaust Museum website and looked it up. And it’s not listed there as an ethnic smear. If the board says it’s an ethnic slur, OK, but I used it in a political context,” Lorei told the Catalyst.

Lorei told CL shortly after the November 2020 exchange, the listener he argued with protested outside the station with a sign that said something to the effect of “WMNF host accuses me of being a kapo.” Somehow, the sign got into the newsroom and eventually caught the attention of Rick Fernandes—WMNF’s new General Manager hired in October of 2019.

“I told [Fernandes] the whole story, including the term ‘kapo,’ and he laughed and he said don't email this guy again,” Lorei explained.

But roughly three months later, Lorei was fired by WMNF for the second time in a year.

(The station’s previous GM, Craig Kopp, fired Lorei in February 2019 for unrelated reasons, but he filed a grievance and got his job back a month later; Kopp resigned shortly after Lorei was rehired.)

Greaves’ letter to WMNF volunteers said, as soon as the Board discovered the email, it directed Fernandes to terminate Lorei for “gross misconduct.”

Lorei said the listener’s protest sign didn’t leave the newsroom and was still there on the day he was fired and locked out of his office and email.

CL asked Greaves to detail some of the alleged Lorei falsehoods mentioned in the board statement and inquired about the 5-month gap between Lorei’s use of the word “kapo” and the board’s discovery of the incident.

Greaves told CL, “that is when we found out about it. I have no further comment.” He also declined CL’s request to review the emails between Lorei and the listener.

“Our goals [sic] was to correct the record. I believe we have accomplished that,” Greaves added. “Those who want to continue to believe Rob's lies will continue to do so no matter what.”

And while most folks agree that it was not the best choice of words, many in the community do believe that Lorei never meant to use the word in an anti-semitic manner.

Paul Grove—President and CEO at WEDU where Lorei has hosted “Florida This Week” for more than two decades—told CL his station has taken the allegation very seriously and investigated by speaking to WEDU personnel, guests from the program and members of the community.

“WEDU supports Lorei’s long track record as a respected journalist. He will continue to host and moderate Florida this Week,” Grove said.

This is the same Lorei, afterall, who in 1980 helped usher in WMNF’s first Jewish program (“The Jewish Sound,” now known as “The Sunday Simcha”) and the same reporter who in 1978 snuck into a Palm Harbor Ku Klux Klan rally to assess how deep-seated the racism was and how much of a threat the KKK was to the Tampa Bay area.

“We talked to people and didn't let them know who we were, and we all came out of that saying, ‘These are the kinds of people that we have to fight,’” Lorei said about WMNF’s early commitment to standing up to white supremacists. “The KKK rally had a bonfire, a cross burning, dozens of people in white robes—it was really freaking scary. But we knew that there had to be a station that would stand up to that kind of thought, that kind of idea, we didn't want to be part of that crowd.”

Florida Holocaust Museum’s Interim Executive Director, Erin Blankenship could not comment on personnel decisions at WMNF, but told CL that when most people hear the word, it is in reference to concentration camp prisoners who were used to carry out the orders of Nazi officials and were often cruel to their fellow prisoners. Still, Blankenship said, it is disturbing anytime someone uses comparisons like this to the Holocaust.

“It’s hurtful to survivors and their families because it minimizes the experiences of those who suffered or were murdered by the Nazis,” Blankenship told CL.

Samuel Ronen, a Jewish American and activist from Florida For Change believes that “kapo” is an offensive, and complicated, word that is “just as likely if not more likely to come from Jews directed at other Jews they don't like than it is to come from actual anti-Semites.”

In the context of Lorei’s firing, he believes there was an honest misinterpretation of how the word is viewed, and added that, “I don't see it as anti-Semitic so much as ignorant. One might argue that those are the same thing, but I don't believe so in this case.”

Ronen said that he’s also “profoundly bothered” that Lorei “was fired for an anti-Semitic slur while attacking a modern-day brown shirt.”

Mark Potok—whose father escaped Warsaw in harrowing fashion—is a decades-long expert on the American radical right-wing and was a senior fellow at the nonprofit Southern Poverty Law Center (SPLC) where he was editor-in-chief of SPLC’s “Intelligence Report” publications.

The SPLC has designated the Proud Boys as a hate group, and Potok disagreed with the WMNF board’s assessment of the word.

“Holocaust jokes are generally in bad taste, but that’s kind of like getting fired for saying your boss is like the führer,” Potok told CL. “But I don’t think it’s true that any Jewish person would be offended by that word.”

Rabbi Steve Weiler said he doesn’t respect the SPLC as an organization, and was not familiar with the fallout surrounding Lorei at WMNF, but added that he had “no clue” what the word “kapo” meant.

“The only thing that sounds remotely familiar to me is ‘kippah’, the head covering,” Weiler—who serves Tampa’s Shoresh David Messianic Synagogues—told CL.

“I also don’t believe in cancel culture,” Weiler added. Even if [Lorei] said such a thing, we should not be firing people over that,” Weiler said. “I’ve never heard of the word, but I can handle it, I’ve been offended before.”

“The word was used to attack a person who has crafted a cultural identity around anti-semitism and xenophobia in general,” Ronen said.” I'm more offended that this isn't being considered by the community as they weigh whether or not Rob went too far.”

As this story went to press, a coalition of concerned WMNF programmers, control board members, volunteers and listener-supporters announced an Aug. 6 demonstration outside the station. CL will post a separate story on the demonstration today.