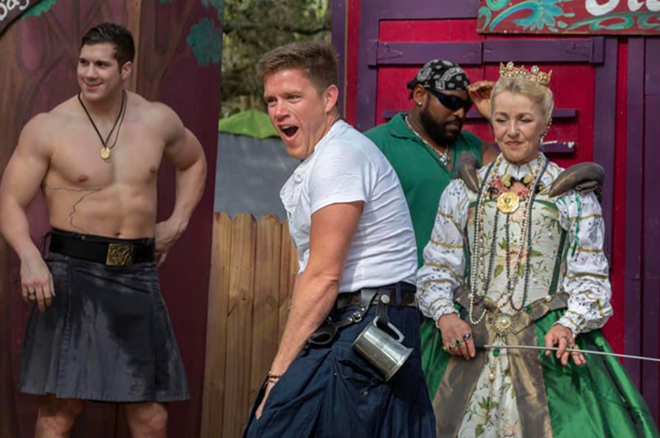 Along with the festive merriment and oversized turkey legs, a performer's bare ass and dong made an appearance at last weekend’s Bay Area Renaissance Festival in Tampa.

During Saturday’s Men in Kilts Competition, attendees were surprised when a performer turned around, bent over, and shook his exposed butt cheeks and medieval package in front of the crowd.

"As I'm filming, they're cheering and cheering, this one came around, swirled around, danced, then he bent over and lifted up his kilt and there's his backside saying hello. Everyone's cheering and cheering and shaking and then you're seeing other body parts shaking around from underneath there," Clermont resident Steve Treague told WTVT.

Treague, who was attending the event with his daughter and her 13-year-old son, told the station they went to the festival for the food and atmosphere, not the nudity. According to Treague, the incident happened without warning, and others in the crowd were turning away and shielding their eyes.

The Bay Area Renaissance Festival has since issued an apology, which was obtained by WTVT, stating that the performer was not an employee of the company, and was “not acting in a manner condoned by the festival.”

One Florida mom said she saw more than she was expecting at the Bay Area Renaissance Festival: https://t.co/Fg2jShM3lO


It’s important to remember that, historically, quite a few Renaissance festivals are strongholds for nudity and sexually explicit endeavors. While the Bay Area Renaissance Festival may not condone such acts, many do. In fact, according to the Houston Chronicle, the Renaissance Festival in Texas features a game of strip Jenga, and discourages photos because “we want some of you to still have jobs on Monday morning." And, as a Vice reporter once said after visiting one in California, “the fair is an elaborate mating ritual complete with pregaming, peacocking, and corsets. Like at a college costume party or an office holiday party, the moment the booze comes out, inhibitions dissipate, marriages open up, and mistakes are made.”

In other words, doth not protest too much.