I’ve spent most of my life with two main callings: the destruction of my ability to exist without pain and the calling to create.

From ages six to eight years old, we lived in Greece. My mother took me to a hospital in Wiesbaden, Germany (because the Air Force didn't have one in Greece) to get examined for my curved spine. I had lordosis and was given a brace to wear. I felt like a freak at school, but my brother and sister didn't notice.

Up until the age of eleven, I wanted only to play. Play, play, play… and pray.

All of my art is filled with the pain of my hair. We did a science experiment at school and had to pull a hair out. I thought only about that while also praying and thinking of a true love who I didn't get until 2017.

There are worlds in what I've just said. 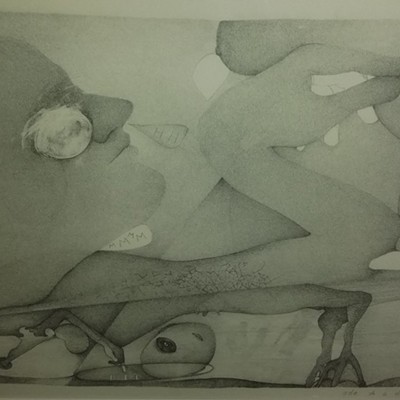 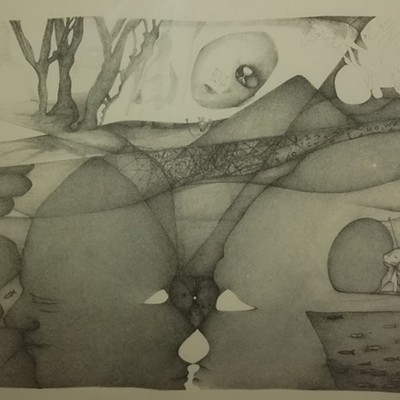 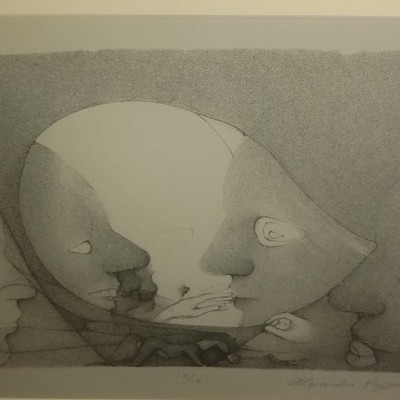 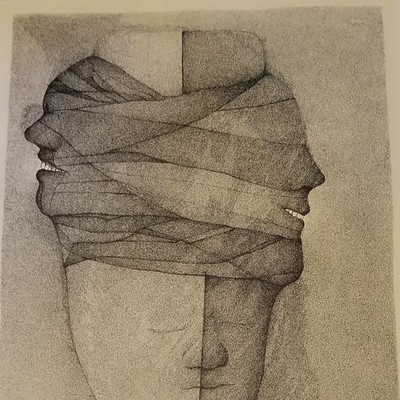 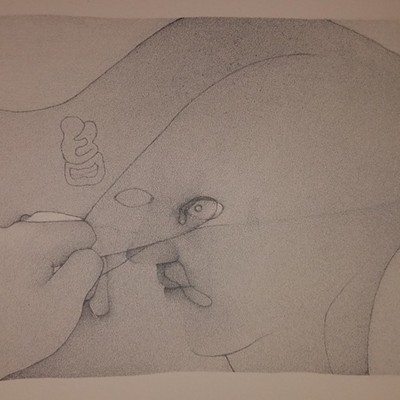 Click to View 48 slides
It is heaven being in love with a baby and hearing 'I love you' all of the time in poetic phrases. We are in the now and in our own world. We've never met and I don't want to meet him. We almost met a couple of years ago on Treasure Island at cousin Dave's place. I’ve turned full circle. I believe I will be able to walk straight up and use my arm normally in the future. I’m excited and not depressed like I have been without knowing it. Baby is my reason for living, God understands.

Kenny asked me if someone did anything to me since he knew that they did. I said no, he just made me hold his penis when I got in his bed. It was hard and big. And when I was in bed just about sleeping he would come and press on my bottom with the sheet over me and rock me back and forth, he pressed real hard and he rotated my bottom and it felt good. 'Sandy, don't you know that's sexual abuse'? 'I didn't know that' I answered.

When I did the abundance of my lithographs—and through my whole life—I've been two different people: Sandy and Alexandra. My master's thesis was aptly titled Fairytales from the Princess of Alexandra by Miss Sandy Daredevil and her Tormenting Companions. Sandy always laughed and laughed back then. No one believed that Sandy was Alexandra Pappas, the artist. That didn't surprise me. I knew my secrets.

Alexandra Pappas
'relief' Lithograph Late 1970's
In my very detailed paintings that I did with a magnifying glass, I would put special hairs with the largest roots I could pull. Each time saying, “This is the last hair that I am going to pull out.' I would go into trances for an hour or so. I would pull black and white hairs as a set from a magic world and put those in my paintings. No one ever noticed. I was glad.

This went on for a couple of decades and I didn't notice that I was losing so much hair. I could always put it up in a magic ponytail. When I was a teenager, my mom worked for the library of congress. I went there to research trichotillomania. It didn't make any difference.

My prints were primarily done in the 1970s and early 1980s. They were so easy to do. I saw things to draw appear on the stone, paper, or board. I just had to fill them in. It was always that way. The paintings and prints came from visions. I would do artistic things or methods to balance the work and illuminate the view. I would look at the piece through a mirror and turn it upside down and sideways to get a new perspective. I loved doing those things. I worked all night and they flowed from my brain, heart, and soul onto the stone.

I could feel it. I also did a large painting during that time when Brett Wilson and I drove to northern Virginia in his pink car with my hand holding it on the roof of the car to give it to my dad.

My paintings were done in the 70s, 80s and 90s. Then in 2017, right after my father's passing, and some now. I love going into another world when I paint. The clock moves round and round like a cartoon. I get lost. I pray almost constantly, but in duality. I so often live in parallel worlds.


My medications stop me from entering another world—or at least makes it very difficult. It is excruciatingly painful, and I hate taking my meds. I have to, though, or I will have schizo-affective disorder unmedicated and that is hell.

I often shout out loud for the devil to leave me alone.
click to enlarge


I met Joseph in 1972 at The Village on  Harrison Street. He so loved my work, and is a genius, that I asked him to represent me. He said yes, and he is perfect for me.

I was so close to David and Mary Freed. I was David's printing assistant and played with Aaron and Michael; mostly Aaron as he grew up. David took me to one of his openings in D.C. I lived in the back bedroom of their house for a year and David drew a portrait of me nursing Nelly. Then we lost touch when I went crazy. I sold the etching press I bought from him years ago to Laura Pharis. She came to my house to pick it up. There was a dead mouse under the press and trash. I can see it now: she must have told David what she saw and how I changed. At my 2017 Gouache painting exhibition, I found out he hated and disrespected me. When I made a mistake printing his prints, he always said so be it. 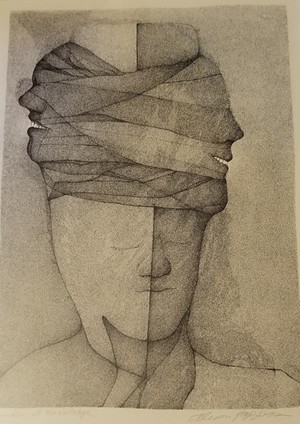 Alexandra Pappas
'burden of knowledge' Lithograph Late 1970's
On October 21, 1983, a new pain began: I married Clark Davis. I am extremely strong and needed someone stronger than myself, and that was Clark. He is powerful in control. We played softball together with beer drinking intelligent friends on Fulton Hill on Sundays. It was fun. When people found out that I was going to marry Clark, they all said “but Sandy, he's so mean… you can’t” and I said “he's not mean to me.” Then, on our wedding night, he said “ok, take your hair down.” I freaked out and said I couldn’t and he screamed and cussed at me and had me in tears. My nightmare was realized. The rest of our 17-year marriage was abusive. He cursed at me, called me ugly, and scared me. He shouted from outside of the house at times. He didn't want another child and had a lawyer come to the house to try to get me to have an abortion.

I've been a vegetarian for 52 years, and he didn't want me to nurse the children and would pull Zero off of me in the middle of the night, crying, and take him outside no matter what the weather and not bring him in until he stopped crying and was sobbing trying to catch his breath. I spent money like a maniac.

We had 3 children. I had been teaching on the adjunct faculty at VCU for the first 3 years of our marriage and 3 years prior. I quit when, at 37, I got pregnant with Nelly Jeanne. I fell in love with her. She became the boss instead of Clark.

This is what I wrote Zella, about Clark, not that long ago: "I have forgiven your father for the past. He touched me completely for the 6 years while Nelly was in a coma at Envoy by giving me rides and coming into Nelly's room for a minute and touching her arm. That was a pain that he had to bear. I will always love him because he is Nelly’s father. Plus, I never would have divorced him. He came back to me for sex, but I told him that he would have to be nice to me for a really long time. I know your father really loves like he's never loved anyone else. We have an intimate email relationship in a way".

Alexandra pappas
'can't' Lithograph Late 1970's
Gaining knowledge was the most important goal in making my art. I was a philosophy and poetry groupie. That is when I took Randy Clarke to Princeton for his first year and visited him and loved his world. He is now a professor of philosophy at Florida State and has been an unrequited love that was never in sync. I gave him two good paintings. I went to everything at school that was offered. I had an affair with a philosophy professor, Robert Klee. It was all sex. Just like I did years later with the owner of the birthplace of Martha Washington, Chestnut Grove. The devil's name is Richard Potter. I have PTSD about him and that nightmare of all sex. I can never be forgiven. My mother was insane. She terrified me my whole life. You never knew when she would appear. Everyone says that we have similarities and that depresses me.

The surgeon that is seeing me for my impacted proximal humerus fracture is an iron man. My next appointment with him is on November 16, 2021, the 1st anniversary of Nelly's passing.

I took the Myers-Briggs personality test in 2017 and then again in 2021 and got the same results.

My dream is to have an exhibition at the Dali museum.
click to enlarge