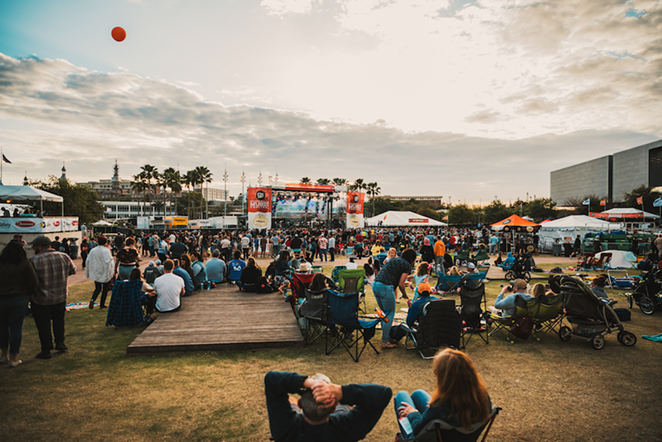 “There’s only going to be one stage on that extra day, Friday,” David Cox, Executive Director of GMF told Creative Loafing Tampa Bay when asked about the extra day his party is adding. That’s because a separate charity spin class is taking over Kiley Gardens, leaving the public to enjoy music on the mainstage at Curtis Hixon Waterfront Park. You probably don’t have to worry about leaving work early either.

“It's gonna be kind of a mid-to-late afternoon start over there, so you won’t have to cut out too early to start pregaming—it'll be in full swing like by 5 p.m. on Friday,” Cox added. And for those attending all three days of GMF won’t have to worry about missing the Bucs take on the New England Patriots in the season opener either because the 2021 festival is going to wrap up on Sunday at right about kickoff.

“It’s so funny because there’s all these considerations we never had to think about before,” Cox said, laughing.

GMF 2020 was the last large-scale event Tampa Bay hosted before the shutdown. The GMF team—which intentionally worked to not get ahead of itself so that it didn’t have to backtrack on any new dates—sees October as a busy month not just locally, but with music festivals happening around the U.S. The crew is also essentially planning two festivals at once since GMF 2022 is still on for March 11-12.

Clearwater Jazz Holiday CEO Steve Weinberger told CL booking his lineup was a challenge because all the other canceled 2020 festival bookings are essentially getting rescheduled. Cox said GMF experienced the same thing, but is also building a lineup and logistics for 2022 while it works to finalize the lineup for its four-day festival.

“Except for maybe one or two spots, we pretty much have the whole 2021 lineup in place,” Cox said. His team’s been patient with building it, especially with the sensitive situation every artist and festival was thrust into when live music shut down for a year. “We're not not putting a date on releasing it yet. We just want to make sure we get everything done right.”

And as far as what the lineup for GMF’s 10th anniversary will look like, Cox promises a bright spotlight on Florida artists—a big goal for organizers when they started to plan the comeback.

“Once the lineup comes out, and on the weekend of the festival, you’re really gonna see the tremendous amount of talent we have here, folks you maybe didn’t even realize lived in the state,” he said. “This is a Florida-based thing so I think that's really going to stand out this year.”

Beyond GMF and Jazz Holiday

And in April, Tampa Bay Blues Festival is in the same park from April 8-10, with headliners like JJ Grey & Mofro, Jimmy Vaughn, Robert Randolph, Larkin Poe, Samantha Fish and more.

Read his 2016 intro letter and disclosures from 2022 and 2021. Ray Roa started freelancing for Creative Loafing Tampa in January 2011 and was hired as music editor in August 2016. He became Editor-In-Chief in August 2019. Past work can be seen at Suburban Apologist, Tampa Bay Times, Consequence of Sound and The...
Scroll to read more Music Issue articles