The Nocturnal Group LLC is also listed as a defendant. 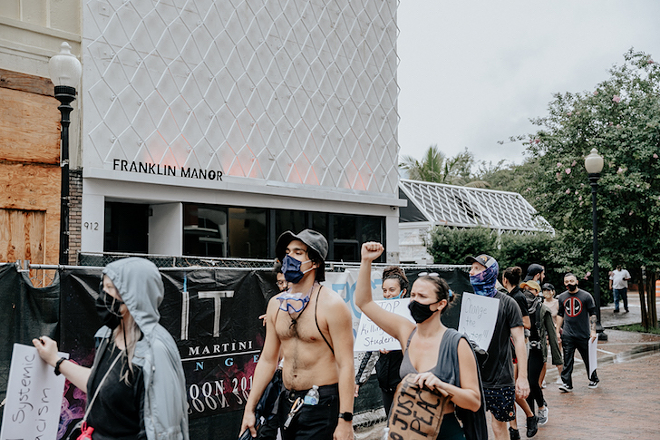 It was only a matter of time, but women have finally come forward to officially accuse Franklin Manor owner Lanfranco Pescante with sexual battery and exploitation.

On June 2, Pescante stepped down as co-owner of Nocturnal and apologized after violent and racist comments circulated on social media in the aftermath of last weekend's George Floyd protests. On June 3, the FBI and state attorney announced that they had opened an investigation into the Tampa restaurateur's violent comments; later that day celebrity chef Fabio Viviani, who helped create Osteria and won “fan favorite” on 2008’s “Top Chef,” announced that he’d severed all ties with Nocturnal.

On June 3, CL asked the FBI and other officials about a rumored warrant for sex trafficking. Tampa Police told CL they didn’t have any comment and a U.S. Marshall said they didn’t have any more information. The FBI also had no comment at the time, but CL followed up on July 2 to see if anything changed (we’ll update the post with any new information).

In the hours leading up to, and after, Pescante’s resignation, social media users shared screenshots of several women who accused Pescante of sexual misconduct. Many of the posts were pushed out by model Carmen Caliente who shared stories of alleged sex trafficking. Caliente also anonymously shared stories sent to her from multiple women alleging rape, sexual assault, as well as being drugged. Some of the women say they were minors and others said some of the events occurred in establishments operated by Nocturnal.

Part of the lawsuit obtained by WFLA allegeges that in December 2016, Pescante induced Jane Doe 1 to “engage in sexual acts through coercive means in exchange for preferential treatment, including preferential sections or tables within the night club.” Jane Doe 2 says that Pescante encouraged her to drink frequently at a Tampa Bay Lightning home game in March 2017 before she and Pescante returned to his apartment where he made advances despite her telling him “No.” Jane Doe 2 said she woke up naked next to Pescante and realized she was raped. Jane Doe 3 was an employee at Franklin Manor as alleges that Pescante persuaded her to go to a party with him by threatening negative repercussions at work.

The lawsuit also says Nocturnal co-owner David Anderson should have known Pescante was unfit for managerial duties and had the “propensity to engage in inappropriate behavior with females and female employees.”

WFLA says the women, all Floridians, are being represented by Joseph G. Alvarez of the Matassini Law Firm in Tampa.