The Eckerd College talk is free and open to the public. 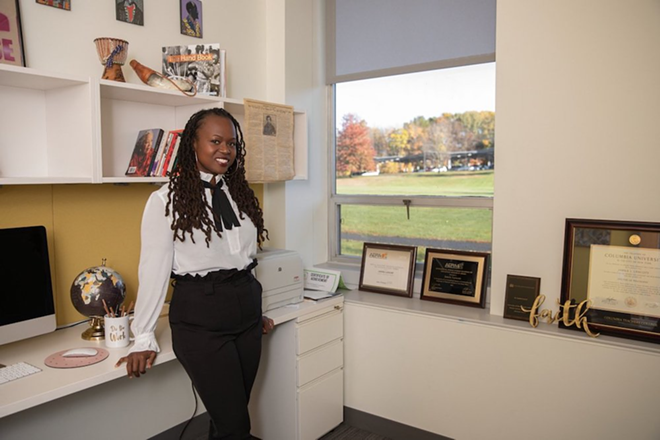 Dr. Jamila Lyiscott wants us to think about how powerful language is and how it’s perceived not only in the classroom but in everyday life.

“I know who I am culturally, linguistically, ethnically, and racially. I know that I’ve been through language and culture in different ways. I was curious like ‘Why am I showing up in this particular way?’,” she tells CL.

Dr. Lyiscott is the Assistant Professor of Social Justice Education at the University of Massachusetts Amherst and senior research fellow of Teacher College at Columbia University’s Institute for Urban and Minority Education (UME).

You can listen to Dr. Lyiscott next Tuesday at Eckerd College, where she’ll talk about her book “Black Appetite. White Food: Issues of Race, Voice and Justice Within and Beyond the Classroom. Released last year, the book centers around how white privilege shows up in the classroom and in our everyday lives, in particular the assimilation and erasure of blackness to succeed in academic settings. She’ll also speak about the Black experience in higher-ed environments and how Black students navigate those spaces. The free event takes place in Fox Hall 7 p.m.-9 p.m.

“That was a turning point for me because I realized I was showing up in a particular way in an intellectual context. Somewhere along the way, unconsciously, I made some decisions about the kind of language practices that needed to show up in an intellectual arena,” she says.

She was commissioned for her first TED Talk in 2016. Her poem, titled “2053”, discusses the political climate after the presidential election. In it, Dr. Lyiscott talks to her future grandchildren about the historical moment. She says writing the piece gave her the power of authorship and she could write anything she wanted between then and 2053 that she felt needed to happen in order for her to deal with what happened after the election.

“By putting it in the future, I opened up the possibility of being able to inspire the kind of history I want to see unfold right now because I know what I want to be able to tell my grandchildren,” she explains.

She sees herself fighting for our individual selves and says that happens through social justice.

“I believe my calling is to help individuals and institutions reach their highest selves. It means we get closer and closer to the freedoms we deserve because we’re human,” she says.

Through her various works involving “Vision-Driven Justice.” Dr. Lyiscott found that part of doing the work means taking care of yourself fully. For that reason, she says, a lot of the top performers have strict meditation and visualization practices.

“I realized a lot of the personal development literature and the literature for the private sector around success is very much invested in holistic practices that require you to be successful in how you take care of your mind and body,” she explains.

Dr. Lyiscott explains that she and her peers are fighting off dismantling systems of power, they aren’t visualizing their futures like those in power. To her, it became important to have people think about and be honest about themselves, what they’re up against, and what it means for the visions they’re creating. It means manifesting the kind of future we see ourselves having.

After participating in many protests between 2014 and 2017, Dr. Lyiscott knew she wasn’t taking care of herself.

“I was screaming at the world at the top of my lungs that Black lives mattered, but I’m not taking care of who I am? If I keep responding to white supremacy and not living my beautiful Black life, then I’m wasting away my life,” she says.

In addition to teaching, Dr. Lyiscott is the founder and co-director of Cyphers for Justice (CFJ), an organization that teaches high school students through mediums like spoken word and hip-hop. Dr. Lyiscott met Dr. Limarys Caraballo, CFJ co-director, through her mentor Dr. Ernest Morrell and the two women combined Youth-led Participatory Action Research (YPAR) and what it means for the youth to create knowledge through any social issue of their choice they want to address.

“I was thinking about what it looked like for young people, particularly young people of color, to have spaces of refuge for their full identities to be honored as part of their learning and their being,” she adds.

While the CFJ programs are academic, it’s through a different viewpoint. Dr. Lyiscott and Dr. Caraballo wanted to be certain hip-hop, spoken word, and digital literacy were all available to the students. Dr. Lyiscott says they’re trying to create the space she believes school can be eventually.

“We wanted to make sure through the process of understanding academic research and even in the products of how young people presented who they are, they could use multiple languages and literacies to engage,” she says.

“The tension between unapologetically knowing, loving, and valuing the power of our culture but then still having to deal with the tradeoff of having to change our appearances forces us to have a white supremacist logic,” she says.

Dr. Lyiscott suggests a way to combat the issue in the classroom is to use a culturally sustaining teaching approach that removes the hierarchy of certain texts, histories, and language practices that lean toward cultural colonialism. She adds in our everyday lives, we can develop the skills to be self-aware and understand how we’re all embedded in racial oppression and how we fit in that system via internal pressures we’ve placed on ourselves.

“Change it up to the kinds of texts, experiences, and voices that represent an array of cultures and racial identities,” she adds. “Make it more inclusive.”