It’s not the first restaurant to land in hot water during the coronavirus fallout. 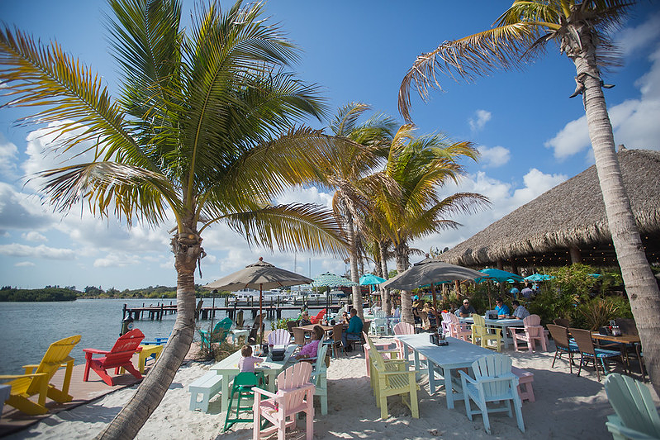 A popular Tampa Bay tiki bar and restaurant has disappeared from social media after a video explaining a delay in payments for employees circulated within the local hospitality industry.

In a nearly 10-minute clip intended for staff members, Karina Tashkin, who co-owns The Getaway in St. Petersburg attempts to explain a presumed lapse in employee paychecks, which were supposed to cover “Wednesday, Thursday and half of Friday."

“That's two-and-a-half-days,” Tashkin explained. “When the virus began, and the shutdowns began in restaurants. We didn't have to pay you. Even the last paycheck. But we did. We knew that you needed that we had it, we gave it to you and that's it.”

Tashkin went on to explain sales woes at The Getaway and how remaining management there was hustling to sell what product it did have.

She then told the employees that they should have been “registered or whatever it is, to unemployment, if that's something that you choose to do.”

“By now you should be figuring out what job you're going to get, seeing that the industry that you have spent so much time in is not going to be up and running for a while, a long time,” she added.

Tashkin may have been referring to a Florida unemployment website that is so bad that it led one aide for Gov. Ron DeSantis to call it a “shit-sandwich.” The website was so terrible that Florida resorted to paper applications, leading people to line up and put themselves at risk of contracting the novel coronavirus that’s wrecked the hospitality industry. The state Department of Economic Opportunity just launched a new "Remployment Assistance" site today.

In the video, Tashkin added that the paychecks for two-and-a-half days of work would be sent out very soon.

In a since deleted Facebook post, The Getaway —whose Facebook page was offline as of Wednesday afternoon—said that the internal management video was “twisted into something very negative and grossly misunderstood by the general public.”

“[The video] was solely meant to honestly and genuinely communicate with our great staff, we would like to let everyone know that we have paid everyone on our staff,” The Getaway added. “Like most other businesses, struggling in these times are working through the challenges. We are planning, like everyone else, to bring all of our staff back once we can. Thank you to the many who have supported us thru this.” 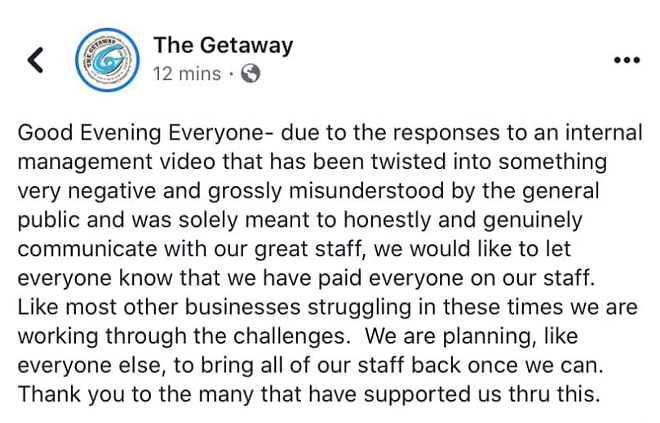 Comments on social media claimed that employees haven’t been paid. Creative Loafing Tampa Bay sent messages to those accounts, and we'll update this post if they get back to us. In the meantime, someone set up a GoFundMe for Getaway employees.

CL also emailed a contact address for The Getaway to ask about the post and employee payments, but we have not heard back. A Wednesday afternoon call to the restaurant’s phone number was also unanswered.

On Wednesday night, Getaway investor Dave Burton—a restaurateur who's been involved with a number of local favorites including Tampa Pizza Co.. Holy Hog BBQ and Sparkman Wharf's Flock & Stock—told CL that while he is not involved with the day-to-day operations at The Getaway, his understanding is that all employees have now been paid and that checks have been mailed.

He then forwarded questions from CL to Scott Tashkin.

On Thursday, a Getaway employee, who wished to remain anonymous, sent CL a picture of a check they picked up for work completed during the pay period ending March 17. The employee told CL they are still owed for part of the two-and-a-half-day pay period in question, but haven't received the check in the mail yet.

It’s understandable for a restaurant to be in shock after dealing with the fallout from the coronavirus, but what seemed to shock viewers and social media users is how Karina Tashkin suggested that her workers stop being '"dramatic" and learn to “reinvent” themselves.

“If you're a server or a bartender, a line cook dishwasher, all these positions that we had to lay off. There are places that are hiring,” Tashkin said, suggesting the grocery stores and CVS were hiring.

She went on to talk about the empty restaurant, how she cares for employees looking for jobs and explained that The Getaway was trying to get some help from the government.

“You need to wake up. Wake up, and see that you are going to need to go get a job that may not be bartending and serving. Nobody's hiring bartenders and servers right now,” Tashkin said later in the video. “It's just what's happening. Nobody's going to restaurants, that's what's happening to me.”

We can go back and forth about whether or not Tashkin's video was unwarranted, but The Getaway probably did owe its employees for the two-and-a-half days they worked.

According to Trescot Gear, who practices labor and unemployment law in Tampa, employers must compensate employees for every hour worked, including any commissions to be paid out in terms of their work agreement.

“Now, even if there's been a massive shake up, and everything gets shut down, if they work for two-and-a-half days, then they are owed that two-and-a-half-days pay within the next pay period,” Gear told Creative Loafing Tampa Bay.

“So even though we had a massive shake up and we had shutdowns and all that. They still are on the hook, unless they want to claim some kind of insolvency or if they’re going to seek some type of monetary assistance from the state.”

For labor attorneys like Gear, taking on a case gets tricky when it comes to tipped employees who make less than $3 and hour before tips. That’s because the 15 or 20 hours worked over two or three days only amounts to $200-$250. Not a pay day or case that an attorney is likely to take on.

“Those employees do have that potential,” Gear added.

The noise surrounding The Getaway, —located at 13090 Gandy Blvd N. in St. Petersburg—is the second time a local restaurant has landed in hot water after reacting to the fallout surrounding the coronavirus pandemic.

Last week, a now-deleted post on RyGuy’s Chicken and Waffles’ Facebook page explained that the concept—now housed inside James Joyce Irish Pub in Ybor City—would not be serving chicken and waffles until a statewide stay-at-home order is lifted.

"I guess saving a few old geezers is worth taking the world economy and encouraging civil unrest and violence,” the post said.”Want a real crisis? Starve 500,000 hospitality workers in florida for a month and see what happens.”

The RyGuy’s post linked to an article headlined “Pandemic-Related Unemployment and Shutdowns Are a Recipe for Social Unrest,” from Libertarian website reason.com.

On Monday, March 30, RyGuy’s co-owner Janice Goh told Creative Loafing Tampa Bay that she was “still trying to figure out what happened” with the Facebook post.

“I didn’t post that. I did [speak] with my partner and learned that he made that post out of frustration as a small business owner,” Goh wrote. “The James Joyce is still in business and is offering take out and we still keep our staff employed. I’ve also just learned that we now are able to apply for the paycheck protection program so all of our 25 employees will get paid and keep their employment.” 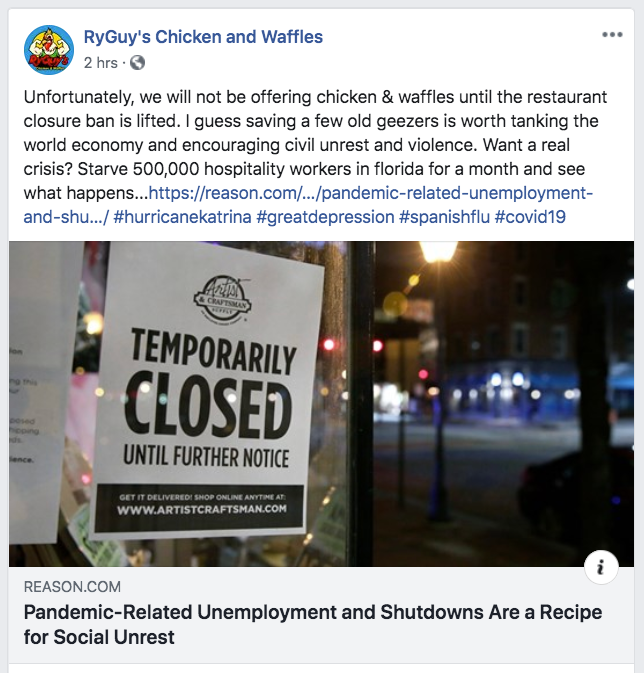