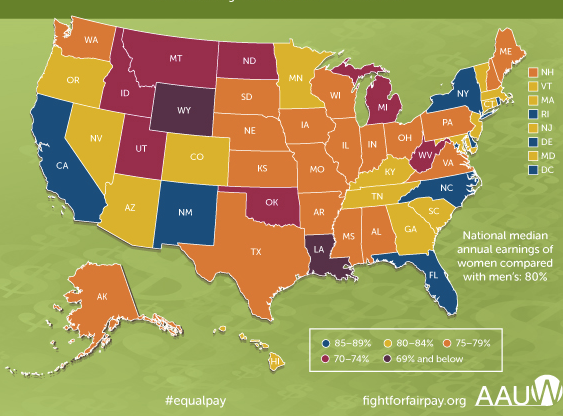 aauw.org
On a day where women's rights advocates hope to raise awareness of the gender pay gap, some members of Congress are hoping a long-shot bill they filed will draw attention to what they see as their Republican colleagues' cavalier attitude toward the issue.

Wow. What a concept.

The Paycheck Fairness Act would make employers justify any discrepancy in pay that favors men over women who are doing the same value and quality of work, bar employees from retaliating against workers who share salary information with one another, prohibit employers from seeking salary information from prospective employees and do a number of other things to help women seek remedies for instances of unfair pay.

“Equal pay is vital to women, their families and the broader economy. Paychecks for women continue to lag and it is past time to fix the inequity — that is why I am cosponsoring the Paycheck Fairness Act,” Castor said in a prepared statement. “Women who work full-time, year-round on average still earn only 80 cents for every $1 earned by men, even 54 years after the enactment of the Equal Pay Act. This gap means less money for women over their lifetimes, as the ripple effects of unequal pay impact Social Security benefits and retirement plans based on average salary. The Paycheck Fairness Act strengthens and closes loopholes in the Equal Pay Act of 1963.”

While all states have a male-female wage gap, some are worse than others. The worst, according to an American Association of University Women study, is Wyoming, which is probably a tad ironic given how that was the first sate where women won the right to vote. In that state, women earn 64 cents for every dollar a man makes.

The AAUW study suggests that closing the wage gap in Florida alone would put more than $44 billion into the pockets of women in Florida, many of whom live in poverty.

Castor has consistently been one of the Paycheck Fairness Act's sponsors, and said she always found Republicans' indifference on the issue astonishing.

“Rather than working with Democrats to promote equal pay, it is unconscionable that House Republicans have voted nine times since 2013 to block the legislation from being considered on the House Floor,” she said.