The attempt will happen in August at Madeira Beach. 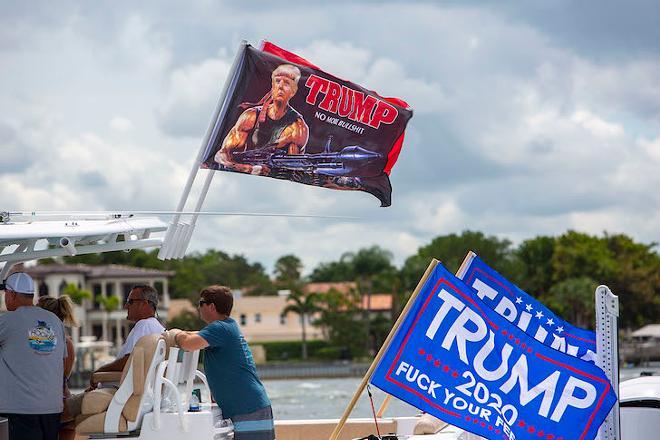 If Pinellas Patriots and Largo’s Trump-loving coffee shop Conservative Grounds has their way, Tampa Bay will soon be home to a world-record setting Trump boat parade.

A Facebook event page says the shop is hosting a “MOAB… Mother of all Boat Parades,” on Sat. Aug. 15 (and yes, MOAB is probably a reference to the big ass non-nuclear bomb Trump dropped on Afghanistan in April 2017).

The flotilla—which we presume will feature lots of Trump flags and a few people draped in Civil War participant attire—starts at Clearwater Beach’s Pier 60 and plans to head south into the intercoastal before heading towards Madeira Beach’s Welch Causeway where organizers say an official count is set to happen.

“Participants need not travel all the way to Clearwater to be a part of the parade, you are free to join in as the flotilla passes by somewhere along the parade route,” the event page says. “TO BE COUNTED FOR THE GUINNESS WORLD RECORD YOU MUST CROSS THE WELCH CAUSEWAY BRIDGE WITH THE PARADE OF BOATS.”

The event is supposed to start at 10:10 a.m, and the event page says there’ll even be a flyover from World War II biplanes. But will an official from the Guinness Book of World Records actually be there?

Creative Loafing Tampa Bay emailed an enquiry to the Guinness Book’s media room and sent an email to Cliff Gephart, owner of Conservative Grounds to find out.

On June 29, Gephart emailed CL to say that there would not be a Guinness Book official present.

"We are going to provide evidence to Guinness after the event in the form of video which will be evaluated and certified by a team of CPA's and Actuaries. We are only raising a minimal amount of monies to cover the initial Guinness fee $800 and other incidentals," Gephard wrote. He added that the rest of the monies raaised will go to local political races and two charities: Eckerd Connects and Sheriffs Ranch.

"The fee for having a Guinness Official present is significant and not necessary to accomplish the goal and qualify for the world record," Gephard added.

The last "Trumptilla" to go down in Tampa Bay was June 14, when 200-300 MAGA boats  went from Apollo Beach past Davis Islands, and the south around MacDill Air Force Base to American Legion Post 138.