The three worst proposals from the Florida Constitution Revision Commission

Abortion limits, money for religious schools and stripping public campaign financing may be coming to a ballot near you. 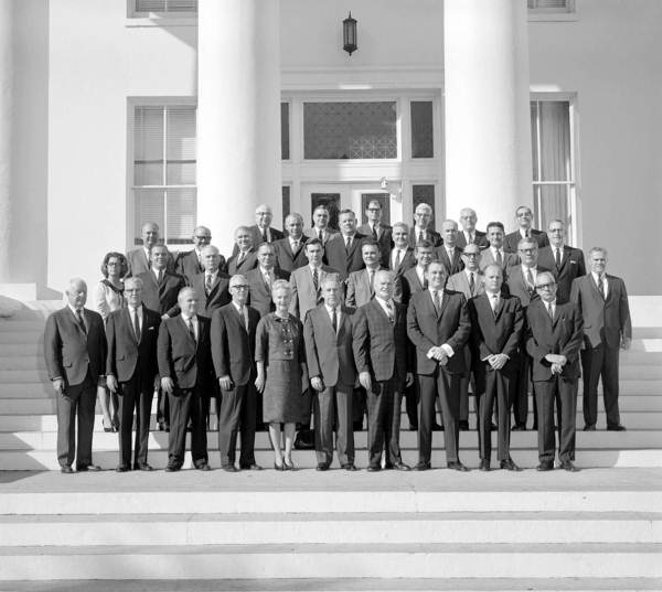 Courtesy of the State Archives of Florida
The Florida Constitution Commission of 1966. Probably took more proposals from the public.

Much of Florida returns to work today from self-induced tryptophan hangovers, and those seeking to rewrite parts of the state’s constitution are no different.

The Florida Constitutional Revision Commission meets again today, and throughout the week, to advance proposals that could significantly alter the state’s education system, campaign finance and, quite possibly, a woman’s right to choose.

They could also move ahead on some progressive ideas to make lives better for the average Floridian — such as the right to a clean environment or ending greyhound racing — but we’re not holding our breath on those.

A little refresher: The CRC meets every 20 years to place amendments to the state constitution on the ballot. The CRC is made up of 37 members appointed by the governor, a Florida Supreme Court justice, president of the Florida Senate and speaker of the Florida House.

Since Republicans control the state, the majority of commissioners appointed earlier this year lean to the right, though there are exceptions like State Senator Darryl Rouson and former State Senator Arthenia Joyner. The CRC chairman, Carlos Beruff, is a Manatee County developer with little political experience except running an unsuccessful U.S. Senate campaign in 2016. You may best remember him for calling Obama “an animal” during his campaign or trying to bulldoze acres of mangroves on one of his properties, because the wetland obstructed his view.

Per the CRC rules, any commissioner can file a proposal to be vetted in committee and voted on by the entire body. The public was allowed to submit amendments, too, and about 2,000 came in by the October deadline. But in a meeting that lasted mere minutes, only six advanced.

So, with that backdrop, it is no surprise many of the proposals come straight from the bowels of the far right. But these three? These are the worst:

CRC member John Stemberger is pushing a proposal to limit the right to privacy already enshrined in the state constitution, to only and specifically restrict government intrusion into releasing citizens’ personal information.

That may sound a little innocuous, but earlier this year, the Florida Supreme Court quashed a proposed 24-hour waiting period for abortions and cited this constitutional right to privacy.

For his part, Stemberger says the proposal is not about abortion and the practice would still be legal if the amendment passed.

But that sounds a bit hollow coming from someone who lobbied for Florida Right to Life and pushed Gov. Scott to end funding to Planned Parenthood because the clinics “illegally sell body parts.” He’s also president of the Florida Family Policy Council, a lobbying group vehemently opposed to abortion and gay rights.

Stemberger, an Orlando-based attorney, is no stranger to amending the state constitution; he worked on the successful 2008 campaign to amend the Florida Constitution to define marriage as being between a man and a woman.

For decades, charter and religious school advocates have tried all manner of ways to inject public funding into private schools. The latest way is through the CRC.

Commissioner Marva Johnson filed a proposal that seeks to create an exception to using public funds for religious schools and programs. She also wants a line added to the constitution’s education section that allows “public funding to attend a non-public school if those needs and differences cannot be completely met and accommodated by the student’s zoned public school.”

Johnson, chair of the Florida State Board of Education, was one of Gov. Scott’s appointees to the CRC. Scott has repeatedly tried to move forward the issue of so-called “school choice,” which always sounds good on paper until one sees the effect of siphoning public school money from his or her own local school district.

Three other commissioners have a proposal to end the prohibition against using public funds for churches or other religious institutions — the “no aid” provision. In a letter to the CRC, Kirk Bailey and Kara Gross of the Florida American Civil Liberties Union told commissioners “there is no reason to repeal the provision nor any mandate to amend it.”

In short, expect several lawsuits if this one passes.

We knew this was coming.

The public financing of statewide elections has long been a contentious issue, but this year, Florida’s Republican leaders seem united to do away with it. Gov. Scott is opposed to public financing as well as Richard Corcoran, Florida House speaker and a possible Republican gubernatorial candidate.

The men appointed 23 of the 37 commissioners, so the two proposals seeking to strip public funds out of the statewide campaigns come as no surprise.

Currently, candidates running for statewide office can receive matching public dollars (up to $250) if they limit their expenditures. The system is entirely voluntary.

But public financing is hated by the multi-millionaires (like Scott) and billionaires (like the Koch brothers) who bankroll politicians’ campaigns in this state and across the country. And sometimes, their rhetoric may seem persuasive: Why should taxpayers fund all those attack ads?

To be sure, Florida’s lax rules regarding using public funds in this way lead to voter headaches. But going the complete opposite way can only benefit the state’s major donors like the utility companies, the Koch brothers and casino magnate Sheldon Adelson.

But don’t fret, Florida voters: The CRC is still taking public comment on these measures. If you have significant free time, you can watch this week’s committee meetings here and submit your opinions on the proposals here. The CRC will also hold public hearings next spring.

And, if all else fails, voters have the chance to vote on the approved amendments next November.