The number of COVID-19 cases at Blackwater, a prison operated by The Geo Group Inc., have skyrocketed in the last week. 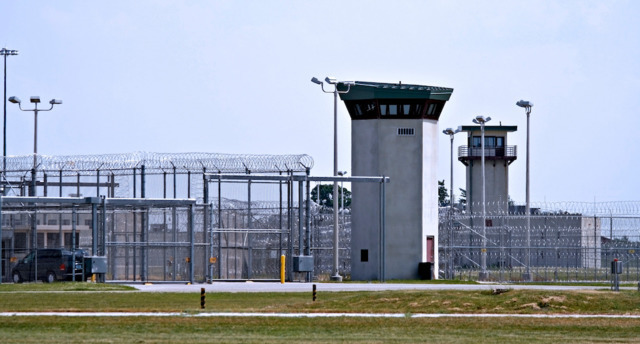 Two inmates at a Northwest Florida prison have died as a result of COVID-19, the local medical examiner’s office confirmed on Wednesday.

Florida Department of Corrections officials have kept the inmate fatalities at Blackwater River Correctional Facility secret for nearly a week, despite numerous questions from The News Service of Florida about deaths at the Santa Rosa County prison.

Jeffrey Sand, a 69-year-old inmate, died April 9 from complications related to COVID-19, according to Jeff Martin, the director of the medical examiner’s office that oversees Santa Rosa County.

Wilson and Sand appear to be the first two COVID-19-related deaths among the state’s roughly 94,000 inmates.

The number of COVID-19 cases at Blackwater, a prison operated by The Geo Group Inc., have skyrocketed in the last week.

Corrections officials have refused to answer questions about Wilson’s death since Sunday. When asked Wednesday why the two prison fatalities had not been disclosed, officials did not immediately respond to requests for comment.

The Florida Department of Corrections has not reported any deaths in the agency’s daily published updates on the number of workers and inmates who have tested positive for COVID-19. The department did not respond when asked if the agency's tally of infected inmates includes the deaths of Wilson and Sand.

As of Tuesday afternoon, 35 inmates and 56 corrections employees have tested positive for COVID-19, the respiratory disease caused by the novel coronavirus. COVID-19 has been detected at 24 prisons and three probation offices across the state, according to corrections officals.

The spread of the highly contagious virus at Blackwater has fueled anxiety and fear among inmates and their loved ones, who say they are having trouble getting information from the state about the outbreak of the deadly disease.

“It terrifies me that the state is not being transparent,” Natausha Hunt, whose 28-year-old son Gary Ford is a Blackwater inmate who has been exposed to the virus, told the News Service on Wednesday. “This heightens my fear for my son, inmates and families. I’m so scared for my son.”

Hunt said Ford has been in quarantine with at least 60 inmates for three weeks, and has been told by corrections workers that his time in quarantine “starts over each time someone tests positive” for the virus.

Amanda Gordon, whose boyfriend is an inmate at Blackwater, said in an interview Sunday that she was upset to learn prisoners had no access to face masks until April 11, when more than two dozen inmates had already been diagnosed with the virus.

“I feel like even before this they (corrections workers) didn’t care for their (inmates) well-being, so now that there is a virus, I don’t think it is going to make them change from before,” Gordon said. “I don’t think they are going to do what they have to do unless it is one of their loved ones.”

The Geo Group has refused to answer questions about Blackwater’s 41 COVID-19 cases. The Boca Raton-based company has referred questions to the Department of Management Services, the state agency that oversees private prison contracts.

DMS officials have not responded to questions about Blackwater’s situation since April 9, when the number of cases within the inmate population soared to 30 and the first death occurred.

Gov. Ron DeSantis’ administration also won’t reveal the number of inmates or workers who have been tested for COVID-19, or how many prisoners are in medical isolation due to the virus.

Corrections officials say inmate testing is determined by a medical professional, who consults with the county health department.

The Santa Rosa County health department, which helps test inmates housed at Blackwater Correctional Facility and Santa Rosa Correctional Institution, is conducting random testing of staff and employees to determine who could be infected, according to Debbie Stilphen, a spokeswoman with the county agency.

“We are randomly sampling staff and inmates from different pods based on the number of specimen containers available,” Stilphen told the News Service last week.

Santa Rosa County, which as of Wednesday reported four coronavirus-related deaths, has enough tests to meet the demand of symptomatic inmates at the two prisons, Stilphen said.