Could the Rays be bound for Ybor?

One Hillsborough commissioner seems to think it's likely. 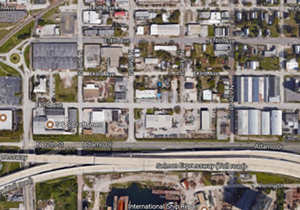 Screen grab, Google Maps
The proposed site's borders are Adamo Drive to the south, Channelside Drive to the west, East 4th Avenue to the north and N. 15th Street to the east.

There's yet another twist in the Tampa Bay Rays stadium saga.

Hillsborough County Commissioner Ken Hagan told Tampa Bay Business Journal's Janelle Irwin that he and his colleagues have selected what they believe is the best spot in the county for the Tampa Bay Rays to build a new stadium.

Hagan heads a panel that has examined more than a dozen potential stadium sites, he said, and the Ybor site — 14 acres just north of Adamo Drive between Channelside Drive and N. 15th Street — best fits the criteria.

“I’m thrilled about the possibilities that exist about this location,” Hagan told Irwin. “The site has unlimited potential not only for a state of the art ballpark, but it will also catalyze significant economic development.”

The area currently comprises industrial sites, though most property owners there have agreed to sell their land if the team chooses that site for its stadium.

Geographically, it's got some key advantages. It's easily accessible via the Selmon Expressway and I-275 as well as the TECO Line Streetcar System, which connects Ybor to Channelside (and possibly, someday, downtown Tampa).

While Hagan told Irwin the county is working "in lock step" with Rays executives throughout the stadium site search.

“This is another important step in the site selection process, and we are grateful for the time and attention that went into making it a possibility. We look forward to getting to work evaluating this option, along with those in Pinellas County including the Tropicana Field site, as a potential future home for Rays Baseball in Tampa Bay for generations to come,” he said.

Since St. Petersburg Mayor Rick Kriseman signed an agreement allowing the team to explore potential sites on both sides of the bay, the team has been engaged in a search. The team has long sought to leave Tropicana Field in large part because of low attendance, but until recently they were bound by contract from looking at potential stadium sites outside St. Petersburg.

While officials in St. Pete publicly say they want the Rays to redevelop on the Trop site, they've also said they're also looking forward to the sprawling property's redevelopment potential.