Rick Martin plays the straight man to his hot dogs 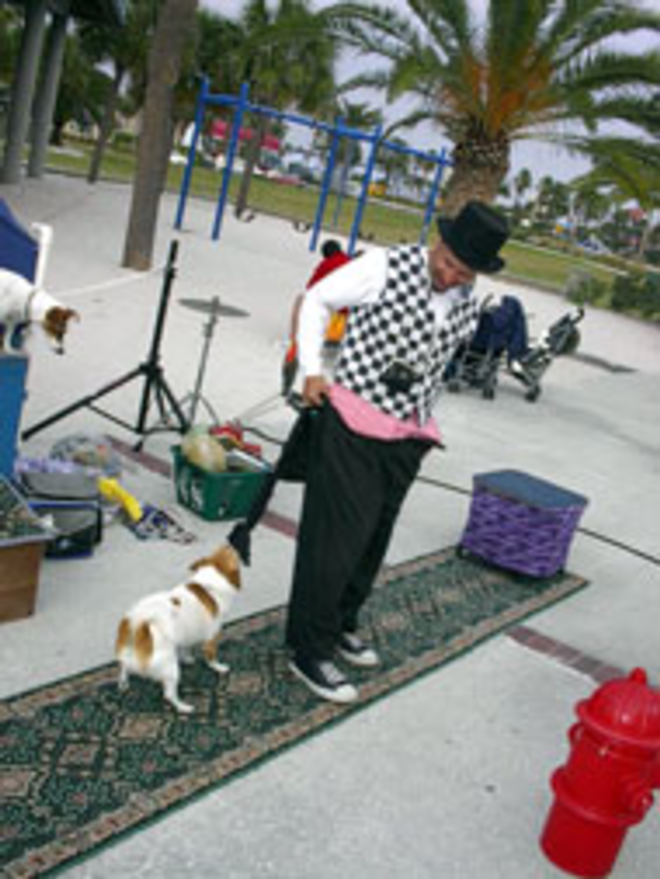 Scott Harrell
WHO LET THE DOGS OUT? Rick Martin's co-actors were deemed 'unadoptable" at the pound before he sprang them.

Crossing the Courtney Campbell, headed west, affords a view of dusky, bilious clouds blanketing as much of Pinellas County as is visible, which is pretty much all of it. Fat raindrops occasionally, speculatively strike the windshield. For every mile traveled, the temperature drops one degree Fahrenheit and the wind increases one knot.

It is not, in other words, the ideal day to be a professional beachside street performer.

But Rick Martin is down here anyway, where Clearwater's Pier 60 strikes land amid a colorful jumble of buildings, curved sidewalks and jungle gyms. Surrounded by a plethora of intriguing props — a plastic fire hydrant, a miniature skateboard on a leash, a carpeted hollow barrel, mounted hoops accessorized by ersatz jagged flames — he sits with his troupe. Though there aren't many folks strolling Tourist Central, several couples and young children pause and gawk expectantly.

There'll be no proper shows today, however; the company is just here to practice. Even when not performing, Martin and his troupe can be found down at Pier 60 virtually every late afternoon, putting themselves through their paces, learning new spectacles. After all, what's he going to do, leave the players cooped up in the house all day?

They're sort of like a canine teen-pop band. There's The Bad One (Twinky). There's The Shy, Sensitive One (Comet). There's The Talented But Fairly Anonymous One (Lucy). There's The Exceptionally Talented One Who Could Undoubtedly Be A Solo Sensation (Chico). All four are gorgeous, spunky little mutts with predominating Jack Russell and Rat Terrier genes. And while Martin might be the brains behind the clever, slapstick-imbued take on traditional animal acts he calls The Tricky Dogs Show, these four are unarguably its stars.

"I wanted them to get the laughs," he says. "I play the straight man, like in a ventriloquist's act — it's the dummy that gets the laughs."

Martin, an engaging, earnest 49-year-old who reminds me a bit of Christopher Guest playing Corky St. Clair in Waiting for Guffman, has been a performer since his early teens. He's spent a lifetime exploring those entertainment art forms largely supplanted by technology, big explosions and the cult of personality: magic, juggling, ventriloquism, puppetry. As a child, he was addicted to the variety-show format of the times, and discovered a particular fondness for the animal acts.

"When I was really young, my family watched Ed Sullivan on Sunday nights," he remembers. "I saw a dog act, and I knew right then it was something I wanted to do.

"Then I saw a chimpanzee act, and decided that's what I wanted to do," he adds with a laugh. "But I realized pretty soon that, you know, it wasn't very practical."

His canine-show ambitions remained on hold through years of itinerant work. After a long stint working on a televised puppet show in Singapore during the late '90s (he'd been hired by the government as a sort of mentor to aspiring natives who adored American comedy, but didn't know how to pull it off), however, he returned to the States and the idea of a dog act. He relocated to Key West, a place famous for its street performers, and rescued Chico, Twinky and Comet from the back rooms of various Florida SPCA locations. (Lucy, a relatively new addition who's been with Tricky Dogs six months, was also adopted from a pound.)

"These guys were all problem dogs, deemed 'unadoptable,'" says Martin, while scratching various ears. "Mostly due to behavioral problems."

It took two years of patient but steady training and sunset performances at Key West's Mallory Square before Tricky Dogs began booking gigs away from the circus on the street.

Since relocating to Clearwater's Sunsets at Pier 60 and its assortment of beach-stroller-friendly concerts, craft stalls and family-oriented entertainers nearly two years ago, they've continued to solicit other bookings; most are landed through recommendations or their website (www.trickydogs.com). Tricky Dogs has done everything from horse shows to First Nights to a brief bit during a variety program at Biloxi, Mississippi's palatial Beau Rivage casino. Martin's favorite gigs are the grade-school assemblies, though, where the team works educational angles like fire safety and proper animal handling into its act.

Martin dons his trademark hat, vest and tear-away pants, his troops limber up via lots of tongue wagging and ear perking, and they show me a few of their tricks old and new. The lingering crowd immediately swells to a dozen or so — basically everybody around on this breezy, quickly chilling afternoon — as the terriers strut their stuff. It's a little like watching a great band doing the afternoon sound-check before a big show; there's a lot of goofing around, but when it's time to run through a song, they do it like they mean it.

The Tricky Dogs act includes its share of standard stuff. The dogs dance, ride the skateboard, jump through hoops. But what makes Martin & Company remarkable is in the little gags, the physical comedy, the way he's successfully injected his love of The Three Stooges and Laurel & Hardy into an animal show. Martin is the butt of the jokes, both figuratively and literally, as the dogs "act up": pulling off his pants, hiding from him, jumping down from the pedestal to push him through the hoop as he pretends to position it just so.

"I didn't want the typical 'lion tamer and the beast' act," Martin concurs. "I wanted it to recall a Marx Brothers routine."

It works. The animals appear to be acting independently, and Martin's refusal to react with too much clownish exaggeration doesn't patronize. The big tricks are always winners with a few, but both the kids and adults in today's small, shivering audience delight every time Twinky sneaks up behind Martin and gives his ass a shove.

Such subtle gags undoubtedly required countless hours of repetition, and any animal lover can't help but wonder how the dogs are "coaxed" into learning new routines; some might even assume out of hand that they're mistreated.

"In five years, I've never heard that," says Martin, bristling slightly. "People can see that they're my pets … they're not livestock or props, they sleep on my furniture."

He points out his van, customized with a ventilator and redundant air conditioning system, where the dogs travel to shows and where he often sleeps with them rather than subjecting them to hotel elevators and bustle. He also says he's turned down offers for television appearances rather than crate the stars for the flight.

"No cages, no choke chains, no electric shocks," he says. "Just love, praise, and cut-up pieces of hot dog."