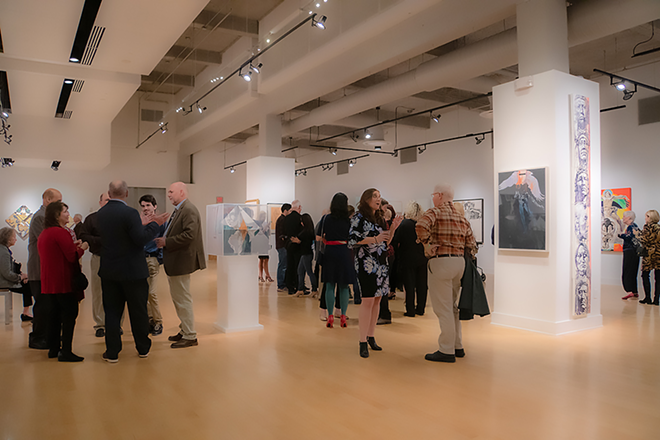 Curating the exhibition was a challenge for Francesca Bacci, she admitted during a brief gallery talk. Even a 4,500-square-foot exhibition space wasn't enough to display it all. She had to cull through 60 years of artwork, and Testa-Secca didn’t always agree with her on what to include and what not to include.

Then there was the issue of how to arrange the artwork. I might have enjoyed a chronological arrangement, where Testa-Secca’s evolution would have been more obvious. But doing it this way, I think, would have presented its own challenges.

Bacci decided to group the work by theme. She mentions eight different themes in her gallery talk: 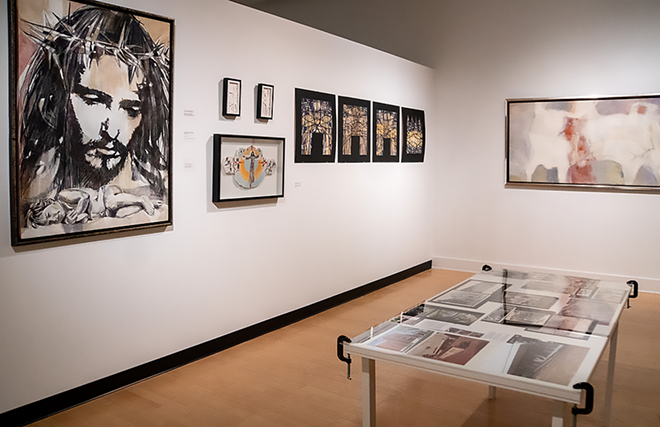 Jennifer Ring
Joe Testa-Secca completed several public art projects between 1959 and 1979, many of which you can still see here in the Tampa Bay area. This includes a mosaic mural for the University of South Florida, stained glass for temples in Lakeland and Tampa, and an alterpiece for a Christian church in Tampa. 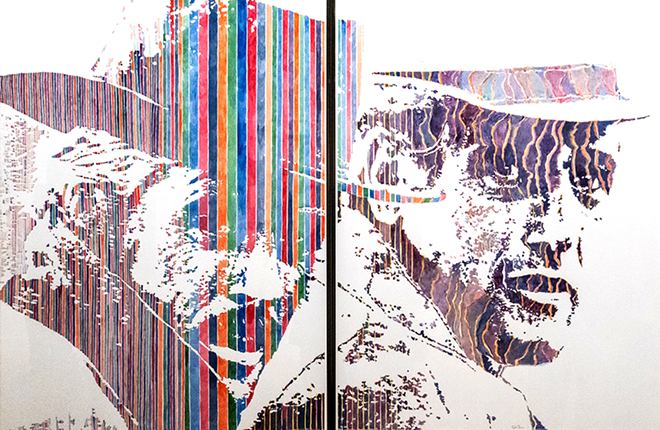 3. The cross as a compositional feature 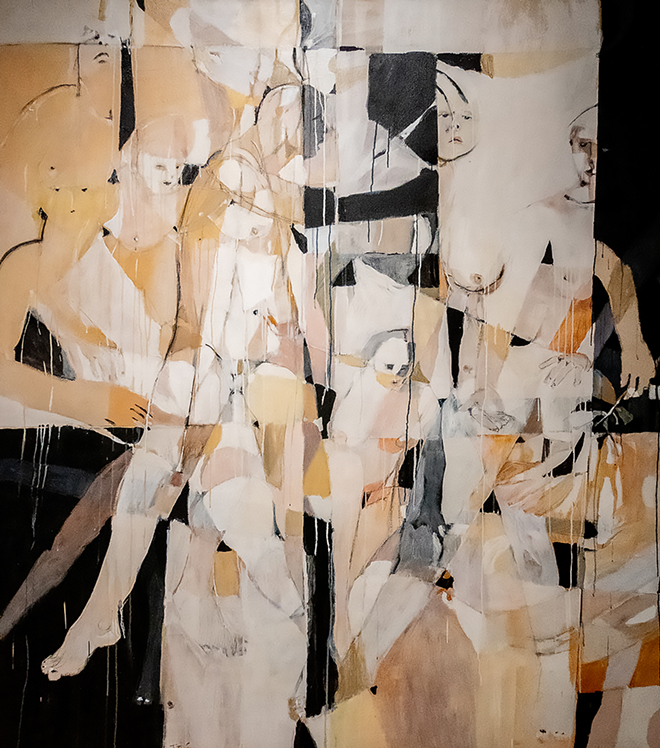 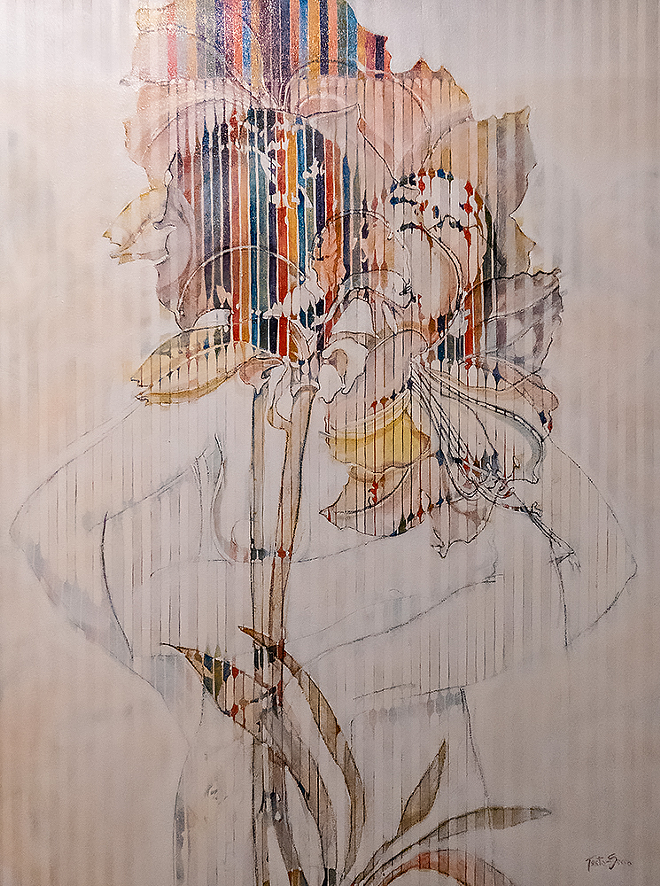 Testa Secca; photo by Jennifer Ring
Love in Bloom, 1987, mixed media, from the collection of Oscar and Anne Sierra 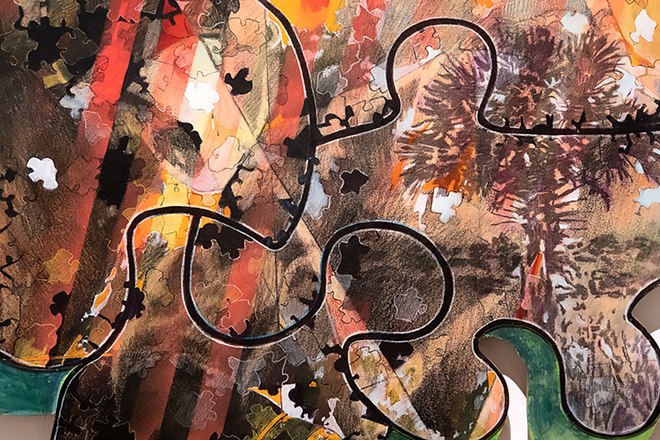 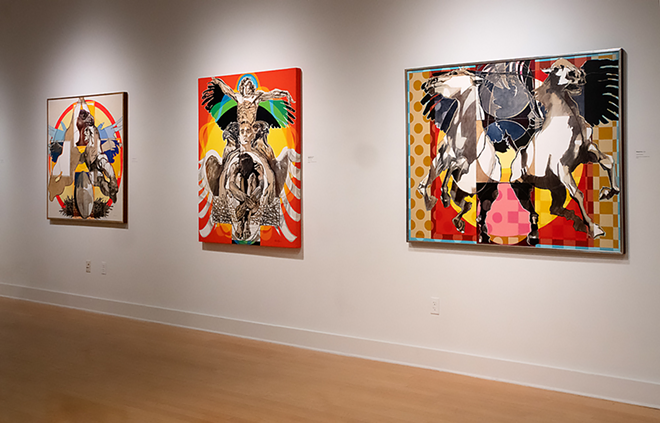 8. Drafting/drawing as a foundation for his technique

Joe Testa-Secca; photo by Jennifer Ring
Catatonic Dream, 1969, mixed media on paper, from the collection of Joe and Rosalie Testa-Secca

Walking around the space, I understood how some of these themes were brief explorations or phases, like the '80s rock-star phase, while others were lifelong fascinations, like Testa-Secca's studies of the human figure.

Given Testa-Secca’s local popularity, Bacci had to grab art from all over Tampa for the show, about 55 works total. Many came from the homes of private collectors, their names listed on the adjacent labels. Many came from Testa-Secca's studio collection.

I am most drawn to the patterns in Testa-Secca’s work. So much of his artwork is dominated by these patterns, whether it be alternating patches of light and dark, colorful stripes, dots or puzzle pieces. Art like this is sometimes referred to as fragmentation or deconstruction art, and it was popular in the late 20th century, when Testa-Secca was actively teaching and creating art at the University of Tampa.

Two hours on a Tampa Fourth Friday wasn't nearly enough time to digest all the artwork populating UT’s ginormous Scarfone/Hartley Gallery. This is one of the reasons I'm looking forward to the closing reception next Fourth Friday, February 22, from 6-8 p.m. The other reason is that the exhibition catalog will be released during the closing reception, and I hear Testa-Secca may be present to sign them.

You can pre-order your copy here.