Officials say by the time we know whether the storm will come to Pinellas, it will be too late for low-lying areas to evacuate. 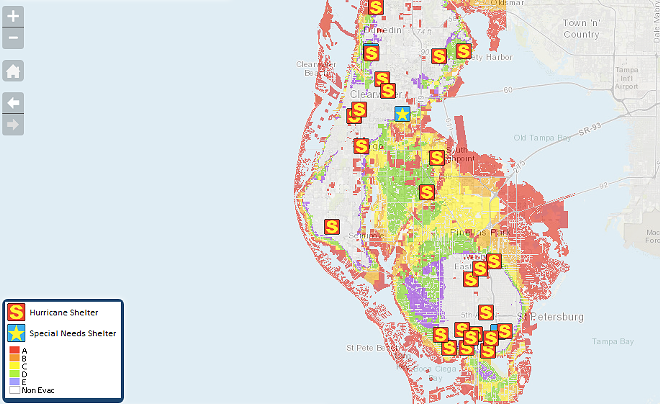 Screen grab, pinellascounty.org/apps/knowyourzone/
This searchable map is linked below.

On Thursday morning, Pinellas County Commissioners got a briefing from county officials on all things Irma.

Ultimately, they decided to order mandatory evacuations for residents/visitors in Zone A, which includes the Pinellas Beaches, Tierra Verde, Shore Acres and Snell Isle. People who reside in mobile homes, regardless of geographic location, are also included in that order because of Hurricane Irma's potential winds.

The evacuation order spans seven days and will start at 6 a.m. Friday.

The resolution, which the commission unanimously passed after the briefing, includes a declaration of a local state of emergency.

Even though officials are preparing for the worst, the National Hurricane Center's current forecast has the storm's path brushing South Florida before heading north — but that route could change at any time. 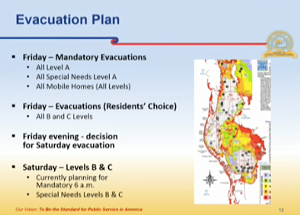 As the storm's path becomes clearer, Pinellas County Administrator Mark Woodard will decide whether to issue mandatory evacuations for Zones B and C, which are also low-lying areas along the coast, but not as close to sea level as Zone A.

Officials said that while winds would be a concern if the storm were to edge closer to the gulf coast, the deadliness of storm surge in a county surrounded on three sides by water is their biggest concern.

“We run from water and we hide from wind, because water's what will kill you,” said Assistant Pinellas County Administrator John Bennett.

But it's tough for scientists to accurately model its likely impacts here at this point.

“Storm surge is the most important part, but we don't have all the data,” Bennett said.

Across the bay, Hillsborough County as well as Tampa Mayor Bob Buckhorn also each declared a local state of emergency on Wednesday.

At this point, authorities in Pinellas said Thursday morning, no one really knows if Irma will pass close enough to the region to cause the extent of damage they fear. And by the time they do know exactly where the storm will go, if they need to evacuate, it will be much too late for people in the most vulnerable areas of the county to do so swiftly given how potentially hundred of thousands of residents from throughout the county will also be getting on the roads out of town on Saturday.

In other words, Thursday's evacuation order is precautionary until we know more.

“The biggest problem that we face is that it is absolutely uncertain and there is no greater or lesser degree of probability as we sit here right now as to which course it is going to take,” said Pinellas County Sheriff Bob Gualtieri. “Some of the spaghetti models suggest certain things, but those are merely suggestions and they can change.”

Find more information on hurricane safety, including a link to a map where Pinellas County residents can find their evacuation zones, here.