Poet's Notebook: Of words and wonder

Our poet gives us his own state of the union. 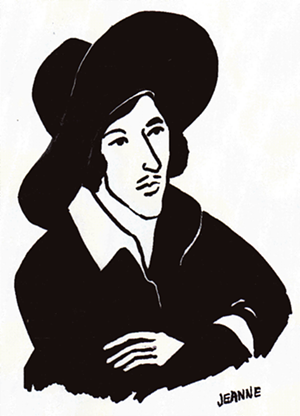 She’s all states, and all princes I,

Princes do but play us; compared to this,

All honor’s mimic; all wealth alchemy.

Thou, sun, art half as happy as we,

In that the world’s contracted thus;

Thine age asks ease, and since thy duties be

To warm the world, that’s done in warming us.

Shine here to us, and thou art everywhere

This bed thy center is, these walls thy sphere.

In a week filled with anxiety, hardship, and chicanery on every level, plus a touch of the flu, I spent a whole day, Tuesday, reading John Donne’s poems. Donne was born on January 22, 1573, and I wanted to acknowledge his influence.

Besides, Samuel Taylor Coleridge once said “If you can learn to read Donne, you can stalk through all poetry like a Master, enjoying your walk,” and I was after some enjoyment.

With America on shutdown, and every electronic device in our house focused on Trump, England’s mess with Brexit, Sudan’s struggles with genocide et al. — too much to handle! — I decided to settle down on our couch with a real book, turning the paper pages, squinting at old notes scribbled decades ago.

By the 1950s I’d been writing secret poems for years and, in an effort to get out of the closet, turned in, with inner tremors, three of them to a college teacher I admired, along with a required paper on Shakespeare. He sent them back with a single comment: Go to the bookstore and buy The Selected Poems of John Donne. Whether he knew that was what I needed, or just a lucky guess, Donne’s poems kicked me into a fever of writing and reading: I wanted to write like that! Serious and sexy, scholarly and witty, formal but flexible: of course, it was impossibe, but from that time on I knew what I wanted to do.

Over the years I praised and taught Donne’s poetry in the normal way that poets acknowledge their influences. But around 2000 I began an ultimate act of homage. Working on a meditative/political poem based partly on the Iran-Contra scandal, I recognized I’d begun a rhyme scheme not unlike Donne’s complex arrangements. I remember thinking, I can do this.

The result was a poem modeled exactly on Donne’s famous love poem, “The Sun Rising.”  My poem’s a stanza longer, but uses the exact poetic structure: 10-line stanzas, rhymed A B BA C D CD E E, with the same unusual syllable counts per line: 8 4 10 10 8 8 10 10. It became the title poem of my book, The Contracted World. I have no idea if Donne would have liked it, but I imagine him shaking his head a little at the idea, and smiling at Jeanne’s drawing. It took me a year to “finish.”

The state of the union isn’t good. 2019 is perhaps the least predictable year in our history. When will the shutdown end? Will Trump build that wall? How hard will climate change hit Florida? Is there any predictability at all? Well, Newsweek’s politifact-checkers claim that Trump tells at least 30 verifiable lies per day; he would have spouted around 420 since our last Notebook.

So today my heart gives thanks to John Donne, whose poems remain the unchanged gifts they were when he wrote them in the 16th century; and in the middle of the previous century steered a confused young man toward a path filled with wonder, and words, words, words.

How much of happiness should be

earned? How much joy

in every accidental breath alloys

our just thoughts and natural sympathy

until we can’t connect with lives

unfairly far away in all

buzz like engines as he bends behind his veil

It takes time It takes love And it takes money