It was inevitable that Trump would show his whole ass 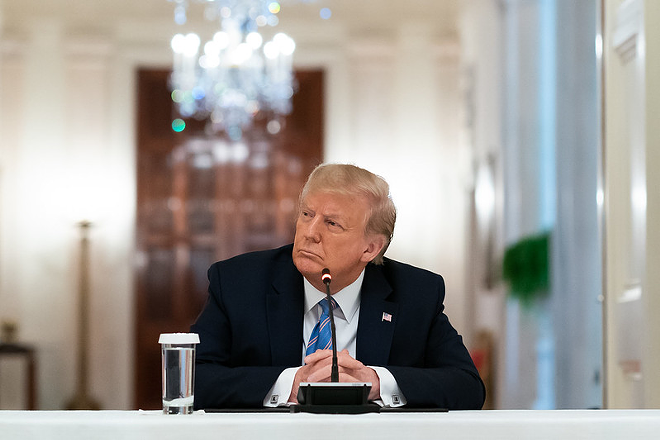 If the last four years have taught us anything, it’s that Donald Trump is preternaturally reactive and impulsive. There are no grand Machiavellian schemes to divert attention when things go south, even if they work out that way on occasion. If you blindfold me, point me in the general direction of a dartboard, and give me enough darts — maybe 100, maybe 1,000, maybe 10,000 — I will eventually hit a bulls-eye; that doesn’t mean I know what I’m doing.

When his poll numbers hit the skids, Trump — being reactive and impulsive — reacts impulsively, leading to a greater-than-normal torrent of the outrages that have defined his presidency. And as the campaign entered the home stretch with the president flailing, it was inevitable that he’d show his whole ass in ways big and small.

I won’t belabor the stories that have dominated recent news cycles: Trump’s WT actual F interview with Axios’s Jonathan Swan; his postmaster general’s effort to slow mail delivery ahead of the election; his paramilitary invasion of Portland; his TikTok ban, which might be retribution for teenagers pranking his Tulsa rally; his remark that Joe Biden, a devout Catholic, would “hurt God” if elected, which is probably news to the omnipotent deity in whom the pussy-grabber now professes belief; his team’s bumbling negotiations over a stimulus package, which will likely end — by design, I suspect — with the president (illegally) extending unemployment benefits via executive order in a transparent attempt to make himself the hero of a dysfunctional Washington.

As the election nears, these stories will come fast and furious. Trump and his allies will say and do outlandish things to drag Biden and create media storms. Already, despite the pandemic and economic crisis, Senate Republicans have found time to launch an “investigation” into Hunter Biden and Burisma, using “evidence” cooked up by Russia-connected Ukrainians and laundered through Rudy Giuliani.

In the background, however, the Trump administration continues to make real policy decisions with real human consequences that often receive little or no notice, the constant chaos providing cover for the destruction.

I could go on, but you get the idea.

For the 80-plus days until the election, the administration can keep chipping away at environmental protections and civil rights rules and enact more immigration roadblocks, things likely to stay just below the radar. But if Trump is defeated, all bets are off. A wounded and unstable president who’s demonstrated a vindictive streak and shown little regard for democratic norms would have 78 days until the inauguration with nothing to lose and the same powers he has now.

He could pardon his friends. He could sic Homeland Security agents on cities that opposed him. He could have the Justice Department investigate conspiracy theories about the election and undermine its integrity. He could start a war. He could launch a nuke. He could tear the country apart out of spite.

The point is, the last throes of a regime are often its most dangerous. Expect the worst — and a lot of it.