Despite signing with the Tampa Bay Bucs, Gronk vows to defend his WWE title

WWE has since made it clear that Gronk’s new job won’t protect him from getting his ass whooped. 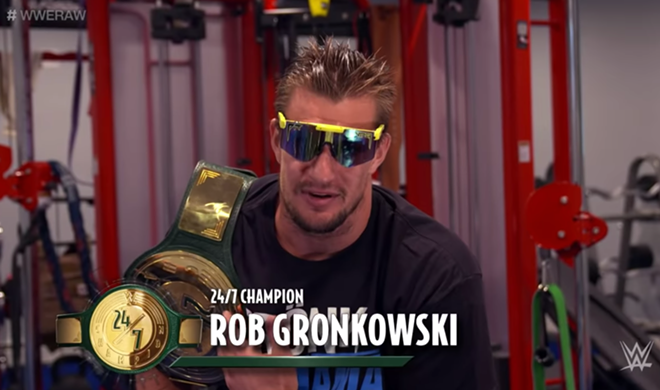 Rob Gronkowski may have signed on as the next tight end for the Tampa Bay Buccaneers last April, but he’s also the reigning Wrestlemania 24/7 champ, which means he must defend the title at all times, regardless of a $10 million NFL contract.

The Gronk made a rare appearance on Monday Night Raw this week to deliver a message to former champion R-Truth, who recently tweeted that he was coming for the belt.

“Now, I’m a nice guy,” said Gronk, while wearing a pair of day-glo Pit Vipers. “So I’m just gonna make sure you have all the intel you need during your quest. I am Gronk, WrestleMania 36 host with the most and reigning 24/7 Champ.”

“Sixteen years of playing football and growing up with four brothers has prepared me to fight any time, any place,” continued Gronk. “So this 24/7, 7-Eleven, I-95 South, W9, whole nine years championship stays with me brother. Take this as a warning R-Truth,  will see you coming because I got eyes on the back of my head.”


For those just catching up with the drama, Gronk shocked the wrestling world by jumping off a podium during Wrestlemania 36, essentially taking out the whole field all at once and pinning R-Truth for the 24/7 title.


However, since signing with the Bucs, Gronk’s future with WWE looked a bit unclear, but now it seems he’s ready to continue defending the belt, or at least the storyline.

WWE has since made it clear that Gronk’s new job won’t protect him from getting his ass whooped.  "Per the rules of the 24/7 Title, Gronk must defend his championship at all times in any location," the organization said in a statement. "He could be celebrating a touchdown pass from Tom Brady. ... Anytime, anywhere."

Creative Loafing Tampa Bay reached out to the Bucs to see what they think about all of this.