Susanne Bartsch: Art-a-Porter at the Tampa Museum of Art: Be who you vanna be!

The Queen of NYC’s clubland is still partying after all these years.

©Marco Ovando
Susanne Bartsch and friends
The phenomenon that is Susanne Bartsch was in full effect recently when the queen of NY clubland guested on a segment of Daytime, the WFLA morning show. The sunny, usually unruffled hosts looked a little gobsmacked by Bartsch, as if some fabulous alien creature had landed among them in the studio. And she did look extraordinary: sheer black body stocking, white harness, towering ’do, ultra-pale makeup, multiple rings and, of course, her trademark voluminous eyelashes, all in service of promoting the current Tampa Museum of Art exhibition, Susanne Bartsch: Art-a-Porter (see review below), that showcases her influence on fashion and culture over the last three-plus decades.

But here’s the thing: She didn’t act like royalty deigning to greet the plebes. Animated, chatty, with a charming Swiss-German accent, she exuded a cheery sense of fun. When co-host Cyndi Edwards said, “I want a little more of what you’ve got in my life,” you kind of understood: If Bartsch can look this amazing and yet seem so down to earth at 9 a.m. at however many years old she is (she prefers to say she’s “ageless”), well, why can’t the rest of us?

That  mix of other-worldly looks and open-hearted accessibility seems to be the secret of Bartsch’s long-running status as “a retailer, a fashion show organizer, a muse, and a catalyst,” to quote her website, Bartschland. She left her native Switzerland for London in 1981, convinced “there was more to life than being a hausfrau,” she tells an interviewer in one of the film clips included with the exhibition. After moving with a boyfriend to his apartment in NYC’s fabled Chelsea hotel (the boyfriend left but she kept the apartment), she found herself missing the creative ferment of London’s underground and, in essence, imported it: She opened a boutique that featured edgy British designers like Vivienne Westwood and John Galliano and began throwing parties at clubs like Sauvage and Copacabana that attracted a gender-fluid crowd hungry for her brand of anything-goes fabulousness — parties that included such legendary extravaganzas as the Love Ball in 1989 (a major fundraiser for AIDS), and her 1995 wedding to gym owner David Barton, in which she wore a huge bubble of a veil by Thierry Mugler, he wore a loincloth and their 1-year-old son was a member of the bridal party. (The veil and a video of the wedding are part of the exhibition.) The Bartschland brand is, if anything, more iconic than ever. Besides the TMA exhibition (a smaller version of a show that originated at the Fashion Institute of Technology in NYC), she’s the subject of a new documentary (Susanne Bartsch: On Top) that won raves at this year’s Hot Docs festival in Toronto; she’s moved from being a spokesperson for MAC makeup to touting her own line of lashes; she’s been the subject of one coffee table book, with another one in the works; and she’s still throwing parties, including the mega-popular On Top and Boom! atop The Standard, as well as producing events for clients like the Museum of Modern Art.

After an initial attempt to speak with her didn’t work out (the phone appointment slipped her mind), we connected over Labor Day weekend. She was recovering from the flu amidst renovations in her Chelsea apartment, but was just as gracious as she’d seemed on TV. 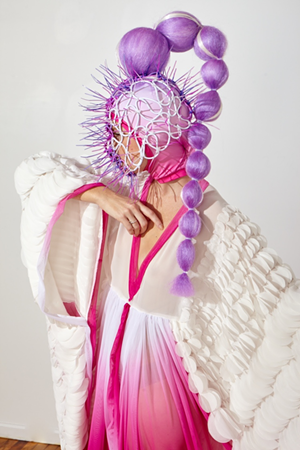 Charles Ludeke
A design by Casey Caldwell, a St. Pete native returning to show his work at CITY.

Tell me about Saturday night’s fashion party [CITY, which raises money for TMA’s exhibition and education programs]. IMPORTANT: Due to the approach of Hurricane Irma, CITY, which had been scheduled for Sat. Sept. 9, has been cancelled. The museum hopes to schedule another fashion-related event with Bartsch sometime in the future.]

I call it Art-a-Porter. Instead of having a fashion show where a model comes out and walks around, I’m having different artists [Muffinhead, Ben Copperwheat, Hana Quist, LACTIC Incorporated, Casey Caldwell, Veritée Hill, BabyLove’s Latex by Renee Masoomian, SSIK by Kristina KISS] that use fashion as art — not functional wear necessarily. I’m having them do different areas, like an exhibition of humans, and looks, as opposed to models coming and going out.

What goes into making a perfect party?

I just go by my gut. If the space is right and I like the energy, then I go into the space and I’ll create something to go with the space instead of trying to make the space something else… The mix of people is very important — never just hetero or gay, uptown or downtown or elitist. I like to dress up because that encourages people to do looks, and that attracts a great element of people. It’s really cool.

You’ve kept your parties going. Why do you think other aspects of nightlife in NYC have faded, to the extent that the city’s thinking of appointing a “night mayor” to improve the scene?

I think in New York it’s become almost impossible to open a club. The space, the licenses, it’s so difficult. The city’s turned into lawyers, real estate and accountants, it’s really not about artists anymore — and it’s really expensive. They want to have a nightlife mayor? They better lower the rents, or give people permits to do the events. The “mayor” isn’t going to do anything — there’s no spaces available that you’re allowed to use.

You have so many balls in the air. How do you keep it all together?

The bottom line is I really love what I do. I like uniting people, I love dancing. A night in the club dancing is like meditation for me — you dance to a great DJ, you’re like totally in the moment, no one has the phone out, I love that. I’m not a planner — you see I couldn’t do the interview with you yesterday. I just go with the flow.

Yet I get the feeling that in other parts of your life you’re meticulous.

I definitely have an eye for detail, but I’m also into the messy. I don’t know, I like my house clean; I’m Swiss — vacuuming is Swiss foreplay! I can be an organized mess — when I do have a mess I know what’s exactly in each pile. I have great ideas. Creativity is like god — having an idea inside your head and you make it happen.

And it keeps you young — you’re ageless, right?

You’re only as old as who you’re sleeping with. If you’re 58, who cares if you say you’re 48? I’m not really that age-bothered. I’m active — I enjoy giving a platform to the kids. My nightclubs are almost like an art gallery — people express themselves and maybe they get discovered.

By providing this platform, you’ve had a continued influence on the world at large.

And you know, it’s almost more important now than ever, because everything is on this square. You know that square? The telephone, the TV, the laptop, the iPad — people are living those lives now — and I think it’s more important than ever that people see the real thing. [In a club, at a party] you feel each other, you smell each other, it’s real.

Who’s the most influential person in your life?

My son [Bailey, now 23, writer/painter/filmmaker/musician, just graduated Brown and working at Lionsgate]. It’s amazing when you have a kid, you really learn who you are. It’s a fantastic thing — it’s not just about you anymore. And once that baby shows up in the world, you let them be who they’re gonna be, not have them be who you want them to be.

There was a mix of people at your exhibition at TMA the other day — club kids who were there on purpose, but also families with children wandering in.

I saw lots of kids, little girls, looking at everything at FIT — it’s so fun. One thing that’s so powerful about having an exhibition is that when these clothes are in the closet they’re things, they’re technical — what shoes are going to go with what look. But when you suddenly see it on the mannequin, the look you had in the closet, you go “Omigod!” You have memories.

Did you wear everything in this show?

Omigod, many times. They’ve been around the world, these clothes.

How do you get around the comfort question — wearing the lashes and the corsets. It’s work to wear them, I would think?

But they make me feel good. Sometimes I’m tired and wish I didn’t have to do anything tonight — you know, like we all are, we just want to crash. And then once I put on this stuff — the makeup, the wig — I just come to life, it feels like I had 12 hours of sleep. And if it’s a little tight or sometimes, “Oh ouch,” it reaches into the hipbone, I’m fine. I feel good in it! And everything’s made for me — it’s not off the rack.

What are you wearing on Saturday?

I’m not sure yet. I’ll have to deal with that tomorrow. Whoa, I better pack soon…

People going to CITY may worry whether they can possibly wear anything that’s fab enough for a Susanne Bartsch event.

Oh, no, don’t! To me that’s not what it’s about. It’s about what you feel like that day, it’s not a ball where everyone has to wear black tie. The rule is, be how we want to be. And you know, dressing up is fun —  it’s like you read a book, or you go to the movies, it’s a pastime — it’s fun to try on different things, and just experiment a little bit. I like that idea about it all. But I don’t want people to feel worried about what they’re going to wear, that they’re not fabulous enough. That’d be a downer to me.