The torture debate gets personal. 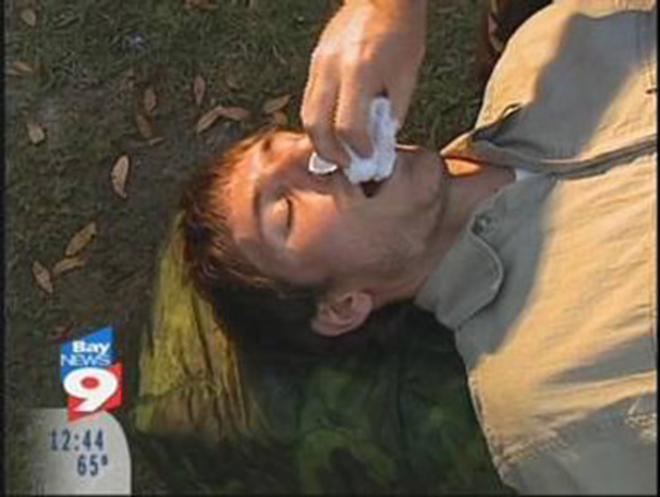 Bay News 9
PRE-SOAK: The author is prepped for the big pour.

A grim-looking man in army fatigues places my hands behind my back and leads me to a decline weight bench covered with a camouflage blanket. Another man dressed in fatigues shoves a rag in my mouth. A dishtowel is placed over my head. My heart is beating wildly and I'm short of breath.

The first few cold drops of water hit my upper lip. Then it's like my face is under a faucet. For what seems like several seconds, water covers my face and fills my nasal cavity. Then I feel a particularly cold blast shoot up my nose and into my throat. Panic sets in.

I am being waterboarded.

Waterboarding became a part of the mainstream lexicon in 2005. ABC News reported that CIA agents had used waterboarding on three terrorist suspects held by the U.S. (CIA director General Michael Hayden confirmed these reports this month). The debate widened as government officials were asked if waterboarding was "torture," an important question because torture is against U.S. and international law.

Following the controversy was Chris Krimitsos, executive producer and host of The Bleepin' Truth, a local cable access and online debate program. (The show gained some notoriety last year when street preacher Tony Katz threw a chair at Joe Redner during a taping.)

"We did a debate on waterboarding a while back, and most of our crew didn't know what it was," says Krimitsos. "They know the word, but they don't know exactly what it is."

Krimitsos figured the best way to educate the public, and boost ratings, was to demonstrate waterboarding on a public sidewalk. He recruited Dennis Ruppert, a 44-year-old personal trainer and self-defense instructor, to be the detainee. Ruppert, a former anti-terrorism specialist, had already been waterboarded several times as part of his military training. Scott MacWherter, a former Marine who now works in real estate, would act as interrogator.

"We have no ulterior motives," explained Krimitsos. "Decide for yourself what waterboarding is all about."

What better way than to experience it?

I thought I knew what I was in for before arriving at the small strip of grass on the side of Dale Mabry (adjacent to the Mons Venus, no less). I thought waterboarding was dunking a person's head in a tub of water until he almost passed out, then pulling his head up for a few moments and plunking him in the water again.

This is not the case.

"I hope [the public] understands it's not a bravado type thing," explains Ruppert, who supports the use of waterboarding against terrorist suspects. "You're trying to get information from someone. This is a tool that is used, just like a lie detector. This doesn't need to be taken off the table."

MacWherter, who will be performing the waterboarding, fills up two buckets of water. Though the 38-year-old never waterboarded anyone during his four-year stint in the Marines, he consulted "advisors" in the state department and military to get the technique down.

"I'm one of those people that is somewhat on the fence," he admits. "This is sort of an experiment to me."

After three nurse practitioners arrive, a Bleepin' Truth crew member leads a hooded Ruppert to the decline weight bench. Ruppert, 5-foot-11 and weighing 205 pounds, lies on the bench, while MacWherter stuffs a rag in his mouth and places a dish towel over his face. Then MacWherter slowly pours water from one of the buckets over Ruppert's nose and mouth while screaming at him to "give up the information!"

More than a minute (and a gallon of water) later, he shoots up off the bench, gagging and spitting.

Afterwards, I take Ruppert aside and ask him if I should go through with it.

"One tablespoon of water in your lungs and you're dead," he says, matter-of-factly. "I wouldn't recommend it."

As a throng of strippers looks on, I'm led to the bench and MacWherter goes into his routine: rag, towel, pour. I take a deep breath, and I'm fine for a few seconds. But as the water fills my nose, I realize holding my breath doesn't work. I don't have control, and for a second it feels like a wave just crashed over me. I shoot up, gasping for air. I look back and MacWherter is laughing.

"You only used a tenth of the bucket," he says.

The video (which can be seen on thebleepintruth.com) shows I only lasted a few seconds. I might have broken the record for shortest waterboarding ever.

THE UNITED NATIONS, human-rights organizations, legal experts, military judges and even John McCain, who endured waterboarding while a Vietcong POW, have all declared the practice torture and condemned its use.

Michael Nance, a counterterrorism consultant and former Navy Seal instructor who made the talk show rounds last year, maintains waterboarding is not effective.

"We give up our own personal and national honor by using the methods the Nazis, Khmer Rouge and Saddam Hussein used," he wrote in an e-mail to CL. "It is not effective to get the truth, just answers which generally are not truthful. We can get what we want without coercive techniques."

After my experience, two reporters asked how I felt about waterboarding now that I had experienced a form of it. I didn't answer, but on the way home, driving through a thunderstorm, the answer came to me.

What I learned is that waterboarding is not, as some media have labeled it, simulated drowning. It is drowning. Just in a slow, controlled fashion.

Should the United States use the technique on enemy combatants? That's not easy to answer.

But is it torture?