Its 18-date U.S. tour starts on Friday at The Bends. 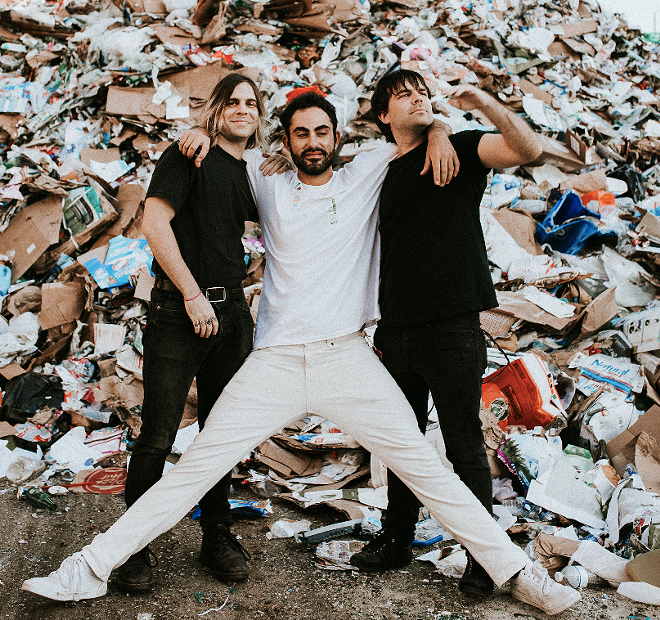 Have you ever heard of a brand new band dropping one single and then announcing a U.S. tour? You have now.

Psych-rock trio Jeremy & the Clones released its first single “Late Bloomer” last month, but this Tampa Bay supergroup has been in the works for over a year — and it’s first show is on Friday at The Bends.

Jeremy Treviño, drummer for local space-rock outfit The Venus, stars as himself. The Clones are Fever Beam bassist Dane Giordano and his brother Drew Giordano who plays in Sonic Graffiti and Plastic Pinks. The thunderous trio’s collective musical resumés could fill a short book, but Treviño says the project is unlike any band the guys have played in before.

“We’re all learning something new with this project” Treviño says. When asked about what he’s learning from the experience, Treviño laughed and said “patience.”

A cartoonist and illustrator, Treviño designs all of the band art, including its tour poster which reads  “Who the F%#K are Jeremy & the Clones” across the top. A middle finger is stretched across the frets of the guitar, forming a more insulting version of barre chord.

Treviño started posting his drawings on the band’s Instagram weeks before its single was released, conjuring up general curiosity about the group, although murmurs of the project had been circulating within the Tampa Bay music scene for some time.

“We sound like my drawings look. Sometimes violent, sometimes silly. It’s a happy marriage between the two,” Treviño says. He’s also excited to have creative control of the band’s visual content.

With almost eight years of gigging and touring between the Giordano twins, and about four years of professional music under Treviño’s belt, it’s no surprise that this seemingly infant band had little trouble booking a three-week run across the U.S.  After Dane finishes a southeast tour with cowpunk band Fever Beam, and as Drew travels back and forth between Portland and Hawaii as part of his work for a music publisher, the three kick off their 18-date tour on October 4 in St. Petersburg. The trek branches out throughout the Southeast,  Midwest and east coast.

“Life is electric when you’re not home,” Treviño says. The band’s music is a jolt, too. The single, “Late Bloomer,” fittingly releases on on Friday the 13th, starts with Dane’s fast bassline and is soon followed by Drew’s signature, fuzzy, and distorted shredding.

“Everything’s gonna be OK, everything’s gonna be alright,” the Clones chant together. Treviño controls the constantly shifting tempo of this electric, rock song that you’re dad will probably love, too. This single is an exciting sneak peek into the world of Jeremy and the Clones, but it isn’t representative of what the rest of their live set has to offer.

Both the musical and professional future of this project is uncertain — so uncertain that even the members have no idea what direction they’ll take next. And that’s what makes Jeremy and the Clones so damn exciting.