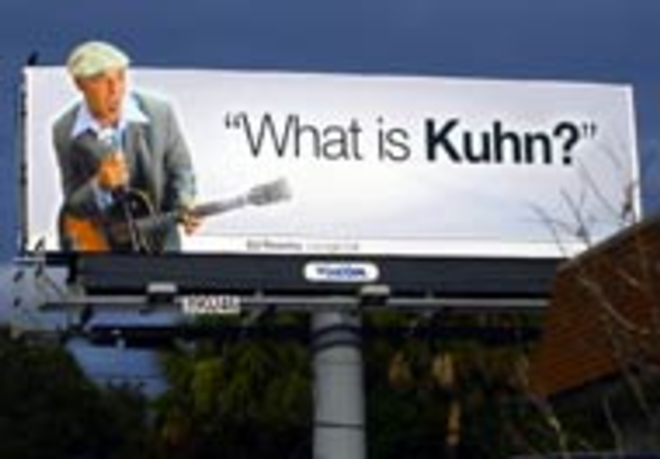 EDDIE ROSICKY
PERFECT PITCH: 'It's amazing," says Rosicky. 'I've had about every girl I ever met in my life call me."

The guy on the billboard looked familiar. There he was, several times larger than life, fingering the neck of his guitar, clutching a vintage microphone and looking for all the world like he was rockin' the house. Next time by, it clicked. Damn if it wasn't Eddie Rosicky, a longtime Bay area musician who fronts the band Lounge Cat. Next to his picture, on a stark white background, stood the words, "What is Kuhn?"Good question — one that would be answered within a few weeks. As it turns out, Rosicky and seven other local musicians were recruited to kick off an ad campaign for Kuhn Honda/Volkswagen, which in May bought the former Lindell Motorcars dealership on Kennedy Boulevard in Tampa.

Owner Jason Kuhn put out a call to several ad agencies in Tampa Bay. He chose Pyper Paul + Kenney of St. Petersburg, a seven-month-old outfit whose clients also include International Plaza, Sam Seltzer's Steakhouse and Precision Toyota. During its short tenure, the company, with offices in the basement of the Kress building on Central Avenue, has grown from a staff of three to 10.

The eight-month campaign includes four large billboards and 15 smaller ones, placed mostly along Dale Mabry and in South Tampa, as well as 15- and 30-second TV commercials that run mostly on WTOG-Ch. 44 and WFLA-Ch. 8.

Each spot features a brief performance by a local musician, be it T.C. Carr blowing harp, Joe Porter on standup bass, Joe Caruso beating a Peruvian box, guitarist Nathan Herrara and dancer Sandra Serrano doing a flamenco thing, or young hip-hopper Will Newton beatboxing, using just his voice to bang out some killer funk beats. Each artist appears in front of a plain white backdrop; a car (Honda or Volkswagen) and some copy were digitally added later.

The spots look cool — in fact, one of the slogans is "Kuhn is Kool" — more like a Gap ad than a typical car commercial. (They were shot on expensive 35mm film.) "Automotive advertising at the local-dealer level is usually all the same crap; they're yelling, banging price," says agency creative director Tom Kenney. "We wanted to make something completely breakthrough for [local] automotive, more of a branding statement, using live talent. Part of the idea came from the national VW spots, where they use a lot of interesting music."

The new campaign's main poster boy is Rosicky, a 40-year-old jazz/blues/swing musician who hasn't held a "straight job" in 16 years. He's in the prime billboard spot, I-275 at the Dale Mabry exit. He's also featured playing a blues guitar lick and singing Satchmo-style in a 15-second commercial, and with saxophonist Dash Longo on a 30-second spot.

"You drive by and it's like, 'Holy shit, man.' There I am on this billboard," Rosicky says with a laugh. "It's kind of a surreal trip. I'm glad it's not super cheeseball, with 27 cars on the billboard with me. It's nice to be affiliated with something a little more low-key, more stylish."

Kenney had been a Lounge Cat fan for a while, so when his agency got green-lighted for the project, he thought of Rosicky and tracked him down. Rosicky ended up acting as an unofficial talent broker for the project, gathering up musicians he knew to audition.

The agency was trying to do high-end stuff on a limited budget, so it's no surprise that it resorted to a familiar riff played on local musicians: paying them less in exchange for the exposure. "Truthfully, I wasn't very comfortable with that," Kenney says. "I think their value is much more than what we could pay. But the reality of it was we had to produce a commercial for a client and we were working under budget restrictions, and we could only allot a certain amount of money for talent. If I'd had the budget, I would've paid them a helluva lot more."

Rosicky won't say for the record how much he was paid, only that it was way too little. But the easygoing frontman isn't sweating it. "I really liked the [agency] guys," he says. "In some ways it isn't smart business. But sometimes you gotta prime the pump."

Thus far, the campaign, which has been up for about a month, hasn't paid off in terms of more gigs or higher fees, Rosicky says, but adds, "It's pretty amazing, man. My stock is up. I've had about every girl I ever met in my life call me." And has his mug sold any cars? That's not the idea, says Jason Kuhn. "We never had the mindset where we run the commercial on Thursday and sell the cars on Saturday. This is a name change campaign."

Lounge Cat generally works two to three nights a week in clubs, augmented by one corporate gig and a couple weddings a month. "Business is improving," Rosicky says. "Three or four months ago, we started playing the Samba Room [in Tampa] almost every weekend. It seems like lately more and more people are actually coming to see the band. People I don't know will come up to me and say, 'Hey, aren't you on the billboard?'

"It's cool that something like this can heighten your profile," Rosicky says, and adds with a chuckle. "Too bad it isn't a record company."