Beatriz at Dinner is a clash between haves and have nots

Ugly white privilege has met its match, at least for the moment. Lacey Terrell/Roadside Attractions
Connie Britton and Salma Hayek in Beatriz at Dinner.
The opening sequence: azure blue sky, trickling water of lake or river, the prow of a rowboat moving forward, slowly, lazily, the sounds of clack and slap as wooden oars move back and forth against the locks, mangroves overhead with their tunnel of leaves and dangling roots, ibis gliding across the horizon.

From this enigmatic beginning, we turn to Beatriz (Salma Hayek), clearly a warm, genuine, low key nurturer, a woman without makeup or pretension, nun-like in her hair and clothing, an ethereal presence. She cares for a goat in her bedroom pen to protect it from a complaining, threatening neighbor. She’s a holistic healer using alternative therapies like candles, aromas, crystals, auras, the laying on of hands to soothe and calm her clients. She scurries on her way to her job as a health care provider/masseuse for cancer patients. This involves some freelancing also, so she heads to a private massage client Kathy (Connie Britton) whom she’d met when caring for Cathy’s college-age daughter in the cancer center.

She arrives in a stuttering VW at an upscale, gated Newport Beach seaside community, passing through multiple security checks, visits with the client/”friend of the family," provides the massage, then is stranded there when the car will not start. As a sumptuous dinner party for her husband’s business associates is being catered that evening, the hostess insists Beatriz stay for dinner.

With Beatriz, the party of six becomes an awkward party of seven. Hesitant at first, then convinced to stay by Kathy's entreaties, Beatriz relents. She's in sneakers; the other women, stilettos or platform shoes. She declines an offer to change into a blouse from the daughter's closet, conceding only to tuck in her work shirt inside her jeans. She is immediately thrust into the center of a complex swirl of alpha-male strutting and trophy-wife chattering, clearly the outsider, mistaken for the servant, ignored in conversation, and just generally invisible. Invisible like your nail tech, dog groomer, hotel maid, roofer or pizza delivery guy. 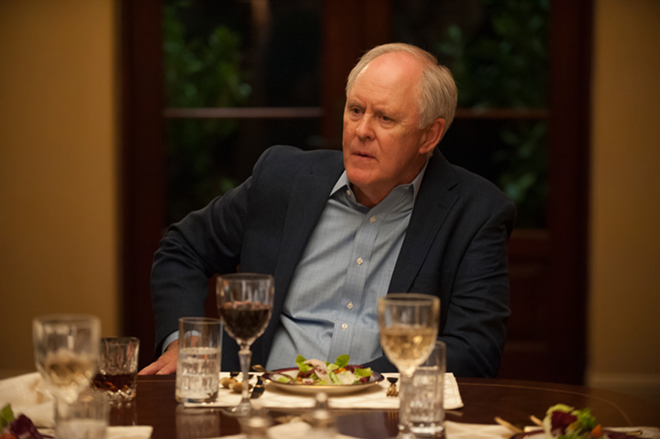 Lacey Terrell/Roadside Attractions
John Lithgow in Beatriz at Dinner.
Beatriz at Dinner is a provocative film — both as in provoking thought and as in poking a sharp stick in your eye — from director Miguel Arteta and screenwriter Mike White, longtime collaborators (Chuck & Buck, The Good Girl). White, an outspoken supporter of animal rights and a committed vegan, was outraged by the 2015 killing of Cecil the Lion by an American trophy hunter in Zimbabwe. What, he wondered, would he do if he were ever to meet that man? This movie began with that germ of an idea.

That idea evolved into a script that features a dinner party as microcosm of the divisions that beset us. For sure, there are plenty to choose from: red state/blue state, conservative/liberal, black-brown/white, wealth/poverty, organic/processed, labor/management, white collar/blue collar, married/single, gay/straight, male/female, hunter/gatherer, head/heart, production/consumption, altruistic/self-serving, meater/vegan, fossil/solar, haves/have not--caste, creed, culture, country all vying for dominance, or at least visibility at the table. The collision of world views at this particular high-toned seating are those most related to economic inequalities, conservation of the planet, and just general human kindness.

One might even consider this film one of the first that purport to show a post-election triumphant Trumpian nation. We’ve been warned for some time now that the Hulu production of Atwood’s The Handmaid’s Tale is a response to the reactionary Trump politics, giving us a vision of how American life might be in the decades ahead.

As Doug, the philosopher-king, proudly proclaims through his gin and tonic, “We all have a destiny to manifest.” And his destiny is one of absolutely subduing the world to his greedy needs, whether it’s wiping an indigenous Mexican village off the map in order to build a vacation complex for wealthy Anglos, or relishing the thrill of safari: ”Sex, drugs, money...no bigger rush than killing a big game animal, deep primal thing...the original dance of man and nature.” This mogul is no tongue-twisted inarticulate speaking in 140-character tweets.

Lithgow’s swaggering Doug is likable and persuasive, seductive, even...until he’s not. Mild mannered, self effacing, intuitive Beatriz has his number immediately and calls him on it, to the shock and dismay of the kinder hypocrites at the table.

To experience Salma Hayek and John Lithgow inhabit their respective characters is breathtaking. I could have watched their sparring all night.

At first glance it sounds potentially heavy-handed and polemical, a venue for outrage and tirade against those businessmen whose purpose is to exploit the planet and pave paradise out of existence, morality and law be damned. But this is a lively dinner party and Beatriz more than holds her own. Not merely a fish-out-of-water, for that would have been much too easy and cliched, Beatriz greets each guest with a startling hug and an open demeanor, and you know immediately how this dinner party of the haves and have-nots is going to go.

It’s simply delicious watching this ensemble do their work around the dinner table, not so heavy on talk — though there’s plenty of that — but we have to marvel at the nuances of body language and facial expressions as they all respond to Beatriz: sidelong glances, the eye rolls, the smirks, the bitten tongues, the disbelief and distaste conveyed in pinched mouths and furrowed brows, silent intakes of breath and puckered moues of annoyance and dismissal.

Beatriz has been invited, but as the dinner proceeds, she is less and less welcome. You can argue her responses to the ugly white privilege are counter-productive. Not at all cowed by the big bad Doug, though the other guests/business associates seem to be because their own financial well-being is dependent on the financier’s graces, she explodes in pent-up outrage and shocks even herself at the depth of her anger about this man — and The Man. At this party, rage and revenge are served with the cigars and coffee.

Lacey Terrell/Roadside Attractions
Salma Hayek and Jay Duplass in Beatriz at Dinner.
Though on one level this may be a comedy of manners — a dinner party gone awry — it's more Albee and Mamet than Wilde or Coward. So much deeper, much more existential really is how this film conveys an anxiety about the state of the world, both our connections to other people and our connections to the planet. Doug seems so strong; Beatriz seems so weak. Our bonds seem so fragile. The forces of greed are so rapacious. The world is so vulnerable.

We end, as we began, with enigma, again with water, this time the ocean, in a sad, embittered, and defeated denouement.