That Cardi B Carole Baskin clapback ranked, too. 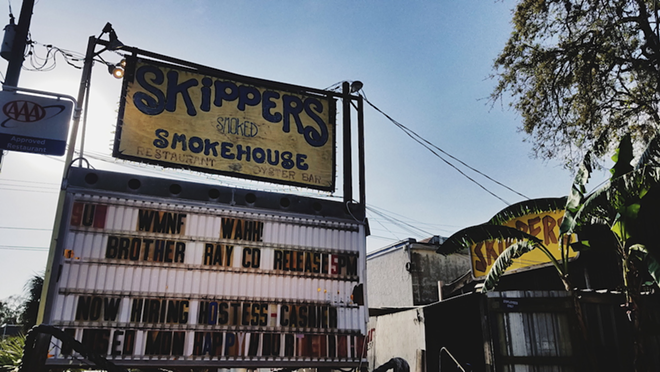 Venue closings and re-openings topped the most read music stories on cltampa.com this year, but the iHeart layoff of a popular DJ also made waves along with rappers standing up for essential workers, the convergence of Cardi B and Carole Baskin, and more.

After 40 years, Tampa’s iconic Skipper’s Smokehouse is closing The 1.6 acres of land Skipper’s sits on will be transformed into an outdoor special events space that will open occasionally for private events. Sporadic concerts are possible, but the restaurant will be permanently closed. In a Sept. 25 phone call with Creative Loafing Tampa Bay, Cricket Larson,  Director of Marketing and Public Relations at Skipper’s Smokehouse, said that the closure is a result of a combination of a lot of different things—the financial impact of the pandemic being one of the most significant. “COVID was the nail on the coffin,” Larson said.

Musician Don Miggs is selling his Lala Mansion in South Tampa Miggs and his wife Lisa DeBartolo, daughter of recently pardoned Edward DeBartolo, put their nearly 16,000-square-foot house on the market in late-September.  It was previously owned by Outback Steakhouse and PDQ co-founder Bob Bashum, who actually transformed the pool house into a mini Outback location. To this day, the commercial-grade kitchen is still there. But now, the space is used for a SSL world-class studio, which is known as the "LaLa Mansion."

Cardi B responds to criticism from Tampa's Big Cat CEO Carole Baskin: "Girl you killed your goddamn husband" Two eras of 2020 pop culture collided in August when Baskin criticized rapper Cardi B and Megan Thee Stallion for using big cats in their internet-breaking song “WAP.” In an interview with Vice, Cardi offered a rebuttal, “I’m not gonna engage with Carole Baskin on that. Like, that’s just ridiculous you know? Oh, Lord. Like, girl you killed your goddamn husband.” Four months later, a tiger nearly tore off the arm of a Big Cat rescue volunteer.

Tampa's DJ Sandman among more than 20 local iHeartRadio employees laid off this week On Jan. 14, iHeartMedia announced a “new organizational structure” and “technology transformation,” aimed at modernizing the company. And by modernizing, we guess iHeart meant trading humans for machines. A Rolling Stone story set the number of laid off employees at close to 900. In Tampa Bay, one of those dislocated voices was that of local hip-hop scene staple DJ Sandman, a 15-year vet of 95.7-FM The Beat, who was one of more than 20 iHeartRadio employees laid off from the Tampa building on Gandy Boulevard. Sandman landed on his feet, however, and launched his new record label, Illsboro, which has already released eight titles including Bobby Wolf’s new single “Gutta Baby.”

Beloved Tampa music venue New World Brewery opens its new location next week In February, the beloved live music venue, restaurant and bar—which, in 2017, closed in Ybor City after a 22-year run—finally opened at 810 E Skagway Ave. and then went to limited use and capacity in March. The bar and outdoor area of the new New World is home to no-cover shows on a stage facing a grassy knoll, and a 300-person music hall is finally shaping up, too.

Floridian Social Club says ‘concert schedule takes precedence over everything’ at St. Pete’s renamed State Theatre In an April chat with Creative Loafing Tampa Bay, Operating Principal Kevin Chadwick, who manages a trust that bought the old State Theatre for $2.1 million in June 2018, reiterated the renamed and majorly-renovated/restored venue’s commitment to booking  live music. The new space is 800-capacity venue with just 200 seats, and its certificate of occupancy could arrive any day now.

Florida DJ Griff Gotti, an alum of Tampa’s Ol’ Dirty Sundays, dies after testing positive for coronavirus On March 21, Lee County DJ Conrad Buchanan—aka Griff Gotti—revealed that he tested positive for the novel coronavirus. The 39-year-old implored his social media followers to be vigilant about their health and described how his wife was nursing him through the “extremely hard” time. He said he was doing everything he could to get his health back on track. But on March 26, Buchanan, who played Ybor City’s famed Ol’ Dirty Sundays (ODS) at Crowbar party early last year, sadly died. Friends asked that Buchanan’s death not be in vain, and ODS has honored that by staging safe shows and even postponing when local restrictions or coronavirus spikes make it too sketchy to gather in a responsible manner.

Florida rapper Plies says Publix employees should ‘get paid like they risking their fucking life' In April, the 43-year-old Florida rapper went on Twitter to post a minute-long video wondering why the hell Publix employees—plus other non-healthcare frontline workers like bank tellers, airline stewardesses and even “fucking doctors”—don’t get paid like they’re risking their lives.

“I woke up this morning, and I thought about it... this shit about, ‘We the richest country in the world,’ I get all of that… But what I don't get, you tell us 100,000 people gonna die from this pandemic. Only 3,000 people that died so far. So that means 97,000 more people gotta die,” Plies added, not knowing that the death count would surpass 320K as of press time. “People are here on the front line, still risking they fucking life, while you CEOs home quarantined with you goddamn family... You don't risk your fucking life but no $9 an hour, no $11 an hour, no fucking $30 an hour. Pay' em like they risking their life.” Where’s the lie?

Dee Snider rips Florida anti-maskers who used his song during Target stunt In September, a video went viral showing a group of anti-mask protesters parading through a Fort Lauderdale Target while blasting Twisted Sister’s “We’re Not Gonna Take It.” Dee Snider also was not gonna take it. “These selfish assholes do not have my permission or blessing to use my song for their moronic cause,” he wrote on Twitter. The “flash mob” was organized by the ReOpen South Florida group. According to the Sun Sentinel, the stunt resulted in Broward County fining the Target store for not enforcing the mask law, and protestors also received citations.