The brains behind Tinder Live 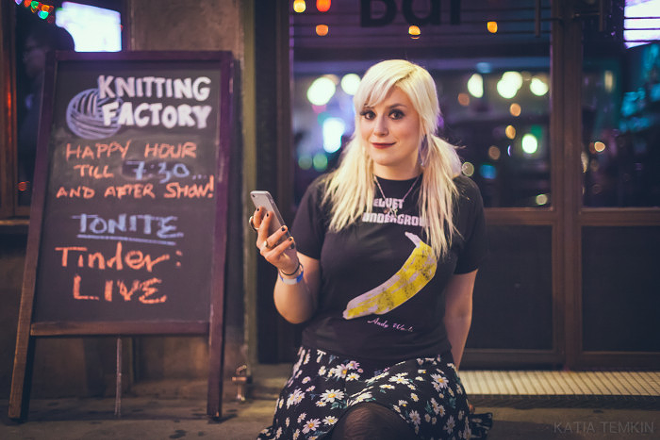 Tinder. What could be more fun? Um, well, lots of things, TBH. Not the least of which is Tinder Live with Lane Moore's traveling comedy show where she decides whether to swipe left or right on her matches — in front of an audience. What's more, she gives the audience control of which way she swipes. Moore created Tinder Live but her main game isn't dating — it's comedy. And when we learned she'd contributed to McSweeney's, we had to talk to her. Here's what we asked her and what she said.

OMFG we LOVE McSweeney’s — tell us about your contributions there.

I wrote SENIOR YEAR IS TOTALLY GONNA RULE BECAUSE AFTER THAT MY LIFE IS GOING TO BE AN ENDLESS ABYSS OF LONGING! I wrote it from the perspective of a popular bro guy who peaked in high school and had some idea he was peaking while it was happening, and was so so fun to write. I love writing bro male characters a lot and do it often. I feel like I understand them in some weird way.

Tinder Live sounds like… an accident waiting to happen. OK, a funny accident. Do you online date?

Not as much as I used to since I spend so much time doing it for Tinder Live, and I have a Tumblr called Male Feminists of Tinder, so it's kind of like if you spend all your time baking cakes, you don't eat cake as much as you used to. But I've been online dating for most of my life, off and on, so I definitely have more than enough experience to draw from.

What made you start to see Tinder as a basis for comedy?

Literally the first time I got on Tinder, two seconds after I started, I made a video of me and my roommates going on Tinder live and put it on YouTube and in the same moment, had the idea for the Tinder Live comedy show, and started creating the show that night and pitched it that same night to venues. That was over four years ago, which is so cool! Since then, the monthly NYC shows sell out and I get to tour all over the world with it and it brings people so much joy, and me so much joy.

Are you single? If yes, if you want to meet someone, how will you do it?

I am single, yes! I absolutely want to meet someone great, of course, and I definitely have this dream that "Oh what if he comes up on Tinder Live but he's so so great and we date after the show and he's my person!" like how cool of a story would that be? Or if someone came up to me after the show and we really hit it off, basically I do love the idea that somehow my comedy show about dating could one day result in that being part of my "how we met" story.

Tell us about something unexpected that happened at a Tinder Live.

I mean literally everything that happens on Tinder Live is unexpected, which is just the coolest thing. The whole show is totally improvised, so when I step on that stage, I have no clue who I'll match with that night, or what they'll say, or the profiles that will pop up, or what I'll reply to them, or who the audience will want me to match with and they really control the show that way so it really is this like Mystery Science Theater 3000 meets Choose Your Own Adventure. Frank Conniff from Mystery Science Theater 3000, who has done the show many times, told me recently that "I always describe Tinder Live as "Mystery Science Theater, if the movie could talk back to you." and I thought that was the coolest, truest thing. I was a huge MST3K fan growing up, and there really is that good-natured spirit, plus the live commentary, except it's actually all happening in front of you with so much unpredictability because it's all live and you never know who you'll get!

How would you explain Tinder Live to our 91-year-old father-in-law?

Hello, sir! Happy to. Well, there's an app called Tinder, and it's basically people's faces and if you like their faces, and they like your faces, you match! If you match, you can talk to each other and meet up and go on a date afterwards. Tinder Live shows you the profiles on a projection screen and the audience chooses who I should swipe right on. I really make sure it's a good natured show, so the audience only picks people who have really weird profiles (one guy's profile photo might be him in a red suit dancing while holding a glass of milk in his parent's living room, while his parents just sit there looking bored, which was a real profile I've seen). If we match, I message them and the audience sees what I'm writing. It's super silly, like with the milk guy I asked him where his mom got her cool slippers and made it clear that was the only reason I talked to him. And the guys I talk to are laughing along with me because what kind of girl matches with a man to find out where his mom got her slippers? Anyway, it's the best energy every because when I match with people, the whole audience cheers because it's all happening in real time. And the best part is, each show can never be replicated, so when you're at Tinder Live, you know you're the only ones who got to experience this particular show, which is a really cool rare thing. It's also just the funniest comedy show and people tell me every single show it's the most they've laughed in years. So come to the show!

What was your worst moment ever at Tinder Live?

Honestly, I think the worst moment for me is when each show ends for the night. I love doing it so much!

Cathy Salustri is the arts + entertainment editor for Creative Loafing Tampa. Have someone you want us to talk to for Seven Questions? Let us know here.