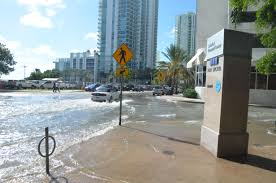 Wikimedia Commons/User B137
This is flooding on a sunny day in October of 2016 in Miami's Brickell area. Think about that — a street flooding not because of rain, but merely because it's high tide.

He may spend a ton of time in an estate that sits along Florida's Atlantic coast, but President Donald Trump apparently doesn't think the water line that's slowly creeping toward Mar-a-Lago is an issue.

Or he doesn't care, which is more likely the case.

On Thursday, Trump announced that he would be pulling the U.S. out of the Paris Climate Accord, which President Obama signed onto in late 2015 during a summit in — you guessed it — Paris.

For those of us living in the State of Florida — those who aren't old, wealthy and utterly lacking in concern for others, that is — the emission of gases that trap heat in the earth's atmosphere will likely have the severest of consequences.

Environmental advocates, policymakers and others expressed worry over the impact the move would have on the agreement itself and on other nations' willingness to cut carbon emissions in accordance with the plan's stated (however non-binding) goals without the U.S. as a leading force.

The agreement was kind of our last shot, as a species, at fending off a dystopian, resource-scarce future. However non-binding, it sets the goal of cutting carbon emissions by at least 26 percent so that atmospheric CO2 levels will be at 2005 levels by 2025.

Even, believe it or not, Secretary of State Rex Tillerson wanted the U.S. to stay in. And he's a former CEO of Exxon, a company that knew what its products were doing to the atmosphere for decades and did nothing about it.

Meanwhile, down here in Florida, anyone with a shred of insight is concerned about what will happen to our state — its economy, public health, its physical shape — if there are no efforts to curb emissions.

Florida is, after all, a coastal state, even if the majority of our state's elected officials (most from the state's rural inland areas, taking orders from the big polluters who enrich their PACs) want to act like we're just Hot Nebraska.

Those who are actually listening to the broad scientific consensus on climate change say not doing what we can to ease the severity of its impacts (sea-level rise, ocean acidification, increased intensity and severity of storms,etc.) will hurt Florida more so than other states.

"It's very disappointing," said U.S. Rep. Charlie Crist, D-St. Petersburg, on Wednesday, as Trump seemed increasingly likely to reject the agreement. "Climate change is incredibly important. It's real. And the thing that is really important to me as a Floridian: it probably impacts our state more than any other; particularly, rising sea levels. Florida is a peninsula. So is Pinellas, a peninsula. So we are literally surrounded by water."

How someone who spends so much time on Florida's coastline could pretend nothing is happening is bizarre, he said.

"I think it would be awful to pull out. And I wish that President Trump, who spends a lot of time in Florida, and certainly understands the beauty of our state and the water that is a treasure here can also be a threat," Crist said. "And so I think the wisdom of staying with the Paris accord is very important and I hope that he will reconsider."

Across the bay, U.S. Rep. Kathy Castor pointed out what is perhaps the most ironic thing about Trump's rationale for backing out of the plan (jobs, ostensibly): that the economy, in Florida, is better off if we don't let carbon emissions go unchecked.

“President Trump’s decision to end America’s commitment to the international climate agreement is a huge economic blow to the state of Florida," she said in a statement. "It will cost us jobs and leave Floridians on the hook for the higher costs of the changing climate. Trump is ceding America’s leadership in the world to other nations with disregard for the economic damage to our people."

For people who are going to be on this planet for more than five years, the concrete impacts of unfettered carbon and methane-spewing are many, Castor continued:

“Sixteen of the 17 hottest years on record have occurred since 2001, including 2016 which was the third consecutive record-breaking year," she said. "Floridians in particular face higher costs tied to rising AC bills, property insurance, flood insurance, local taxes for infrastructure fixes, extreme weather events, beach renourishment and more. The rising costs of the changing climate are a real threat for Florida families and businesses. Miami and Tampa Bay are among the top 10 regions in the world most at risk from property loss from flooding and sea level rise."

In places like Tampa, St. Petersburg and Miami, lack of leadership on climate at the national and state level means that the onus for preparing for higher sea levels, imperiled drinking water, violent storms, flooding and other consequences will fall on the shoulders of city officials, said Environment Florida director Jennifer Rubiello.

“President Trump has got it exactly backwards: there’s no sound economy in our future without a healthy planet," she said. "If both our national and state leadership choose to ignore that reality, then mayors must step in to fill the leadership void to show the world that Americans will do our part to address the climate crisis.”

St. Petersburg is currently home to a contentious five-way mayor's race. Incumbent Mayor Rick Kriseman, who has been outspoken on combating climate change, faces former Mayor Rick Baker, whose views on the phenomenon are unknown, though he did serve on Crist's climate team when he was mayor and Crist was a Republican governor. While it's a nonpartisan race, Kriseman is a Democrat and Baker is a Republican, though the latter has yet to say whether he voted for Trump.

Tampa Mayor Bob Buckhorn issued a statement Thursday afternoon condemning the withdrawal of the U.S. from the accord.

“President Trump will go down as being on the wrong side of history for a number of things but pulling out of the Paris Climate Agreement may be the most damaging to our future,” Buckhorn's statement read. “We are a nation that prides itself on our ability to work with others to help fix some of the world’s most pressing issues and this kind of reaction is shortsighted at best. Mayors across the country should stand unified and work together from the ground up to find solutions to issues facing our cities and certainly the effects of our changing climate is one of them.”