Hide your kids, hide your wife. 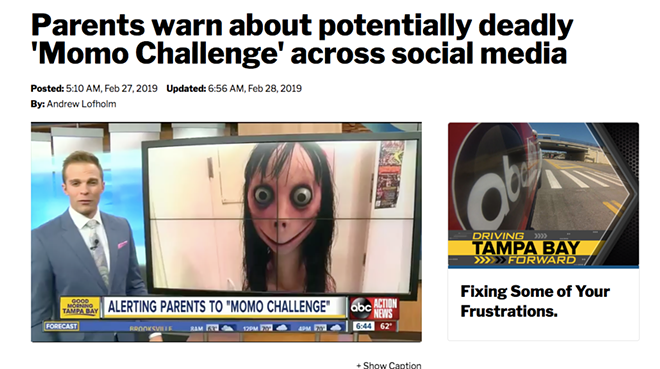 Local ABC affiliate WFTS ran a very real segment this week on the “Momo Challenge,” claiming the incredibly fake viral hoax is in fact a very a real threat to your kids, which it most certainly is not.

The story, “Parents warn about potentially deadly 'Momo Challenge' across social media” will surely scare the shit out of any parent who refuses to spend more than 30 seconds Googling this hoax, which is clearly something reporter Andrew Lofholm did not do.

“The challenge is to meet Momo and to do that one must follow a series of instructions, which can include harming others or yourself. “When my friends or my family ask kids about it they immediately were like, ‘how do you know about it and then ran to them and cried,’” Jessica said… The Momo Challenge has been linked to the death of a girl in Argentina, but none here in the United States.”

The basic idea behind the “challenge,” which first appeared in the summer of 2018, is that it appears on social media platforms (specifically YouTube and Facebook’s WhatsApp) and shows a Japanese bird statue, originally called “Mother Bird” by artist Keisuke Aisawa, which then instructs your children to either hurt themselves or others.

The only problem is there’s zero evidence that anyone has ever taken their own life in relation to the “Momo Challenge,” and YouTube has stated that not only would the video violate their user policies and be removed immediately, it has not been promoted across their site in any way. WhatsApp released a similar statement.

However, it wasn’t until a day later that WFTS released a follow-up piece, not a correction, featuring statements from YouTube and WhatsApp, and a literal one-sentence clarification that while there’s no evidence anyone has died from the “Momo Challenge,” there’s still some scary rumors out there.

“There is no evidence that the Momo Challenge has been linked to the death or self-harm of any child in the United States, though there are unconfirmed rumors of suicides by teens as a result of the game abroad,” said the piece.

But even with a watery follow-up segment the damage was already done. WFTS’ original segment already exploded on their social media platforms. The original Facebook post had nearly 5,000 likes and over 8,000 shares, and it was paired with a bold “WARNING! The Momo Challenge directs kids to take their own life and instructs kids if they tell their parents about it, harm could be inflicted on them or their parents.” Of course, the follow-up post had considerably less engagement on social media, with just over 300 likes and a nearly 500 shares.

What’s even more frustrating is that WFTS already ran this same scaremongering story a year ago, and still followed through with this week’s story as if nothing has changed.

While there’s plenty of things that parents should actually be worried about on the internet, the “Momo Challenge” isn’t one of them, and it’s irresponsible to report on this topic as anything other than a hoax.

But none of this should be too surprising. Similar to the “check your kid's Halloween bag for razor blades and super crack” segments that seem to air every single year, WFTS and many other local television stations jump on stories like the “Momo Challenge” because of the universal parental fear of “hey, what the hell are my kids doing online?”

The Atlantic’s Taylor Lorenz wrote a great piece on why the “Momo Challenge” is bogus and why it keeps popping up, but here’s one of the better quotes:

“What many parents miss is that the platforms themselves often perpetuate harm. Their automated moderation systems fail to flag inappropriate content. Their skewed content-recommendation algorithms promote extremist beliefs. They don’t protect kids against cyberbullying from peers, they milk kids under the age of 13 for money and engagement, and they promote truly gruesome content. The internet is profoundly changing kids’ lives in ways that we have yet to understand, and it makes sense that parents want to keep their children safe. But “Momo” isn’t what they need protection from.”

Stay on top of Tampa Bay news and views. Sign up for our weekly newsletters.
© 2022 Creative Loafing Tampa Bay