Arts money in peril: What happens to local arts if Trump takes away federal dollars?

Todd Bates
The top of the spiral staircase at the Salvador Dali Museum, yet another local arts institution that has supplemented its budget with NEA grant dollars.

A local production of Brighton Beach Memoirs. Creative writing classes for grade school-aged children of migrant farmworkers. An art installation by Nick Cave as the centerpiece of Lights on Tampa.

They’re about as different from one another as they could be.

But a pot of federal money that’s now in peril helped make all of them happen — and local arts advocates are worried it might go away.

“It’s a big deal for us, given that we have a much smaller budget than the average bear,” said Karla Hartley, producing artistic director for Stageworks, which in 2008 put on Brighton Beach Memoirs with $25,000 from the National Endowment for the Arts.

Arts and culture leaders in the Tampa Bay area and other places are bracing for a decision that could drastically affect arts and the communities they serve: the Trump Administration’s possible abolition of the NEA and the National Endowments for Humanities, each of which constitutes .003 percent — yes, three-thousandths of a percent — of the overall federal budget.

Like other policy changes the new administration has floated, it’s unclear if or when the cuts would move forward.

If the president signs off on them, it would be a win for conservatives who think government spending on arts and culture is frivolous. But economic studies of places like St. Petersburg show a surprisingly high return on investment for each dollar spent on the arts.

He said the city weathered the Great Recession better than most because the growing arts scene helped revive tourism, and it would be a shame to see some of the dollars invested in it go away.

“When you’re looking at the national budget, it is very small,” Atherholt said. “Why would you even cut that? It doesn’t make any sense.”

Much of the NEA and NEH money the state receives goes through the Florida Division of Cultural Affairs, which doles it out to organizations via grants. The NEA is required by law to put 40 percent of its grants budget into state-level agencies. The rest goes directly from the NEA to entities that successfully apply for and win the grants, including, locally, the Salvador Dali Museum and Creative Clay in St. Petersburg and the Straz Center and Stageworks in Tampa. It’s not a lot of money — usually several thousand dollars for a series of pottery classes, culturally relevant museum programming or a mural depicting African-Americans’ unsung contributions to society in an area like Tampa’s Sulphur Springs. 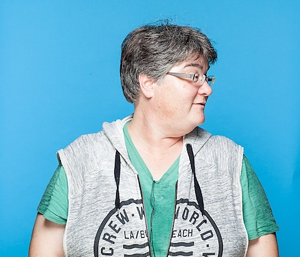 Todd Bates
Stageworks' Karla Hartley isn't going to stop applying for NEA grant money, but she also knows her organization is staring down a possible five percent cut in its budget.
NEH money, meanwhile, goes through the Florida Humanities Council, which has a counterpart in every other state with a similar aim: to foster programs that benefit literacy, culture and appreciation of the humanities. Locally, that means hosting a family reading night to encourage underprivileged kids to learn to read, or creating a digital tour guide to the historic sites of Tarpon Springs that can be accessed by an app.

What gets lost on critics of public arts funding, said Patricia Putman, associate director of the Florida Humanities Council, is that often a single grant to a community or organization can end up bringing in two or three times the grant amount via matching funds from other entities.

“So we are underwriting a walking tour of a community, but the local community is also providing matching funds to make that project happen,” she said. “So, without the federal funds that will go away.”

Martine Meredith Collier, executive director of the Arts Council of Hillsborough County, said in an email that she recently attended an event at the Florida Division of Cultural Affairs, along with leaders from arts organizations across the state. She said she saw “a deep level of concern surrounding the issue of the NEA and its fate under the new administration,” and echoed Putman’s point that funds given out through Cultural Affairs are used to “leverage matching funds, to address local needs and to expand the reach and impact of federal arts funding across the country.”

So what kind of impact would the loss of NEA have on the Cultural Affairs division? In response to a voicemail, a spokeswoman for the Florida Department of State (which oversees the division) sent an email that offered little insight into what the agency would do if it lost that much funding.

“The NEA is a valued partner and the Florida Division of Cultural Affairs currently utilizes NEA funding for cultural programs supporting arts in healthcare, arts in education and underserved rural community development grants. We are focused on our efforts and initiatives this year and how we can continue to promote the arts and culture in Florida. We don’t speculate on questions related to federal policy,” said Meredith M. Beatrice, DOS’s communications director.

Subsequent messages seeking more information were not returned by deadline.

Stageworks’ Karla Hartley said the looming cuts aren’t deterring her from seeking NEA grant dollars for a bilingual production the company wants to put on next year, which she declined to name. The $25,000 grant would make up about 5 percent of Stageworks’ annual budget. It’s not a huge amount, but it’s a world of difference for a production company of that size.

“We have a concern,” she said. “Obviously, having been a past grant recipient, we know what a difference it can make, especially to smaller organizations that don’t have the donor base or the development and funding ability of larger organizations.”

But even if the grant amounts aren’t very big and local organizations might be able to survive without them, some say there’s a symbolic aspect to hanging on to the endowment.

“I think every arts institution needs a robust advocacy of the NEA,” said Hank Hine, executive director of the Dali Museum, in a statement emailed through a spokeswoman. “The money provided the nation is minuscule compared to the importance of the arts. And though we [The Dalí] receive very little, the existence of a program on a national scale to support the arts is important symbolically to the health of the nation. Civilizations are judged in many ways by many measures: certainly one key measure is the vigor of the arts and the nation’s embrace of them.”