Administrators are holding ground, despite increasing pressure from teachers and union activists. 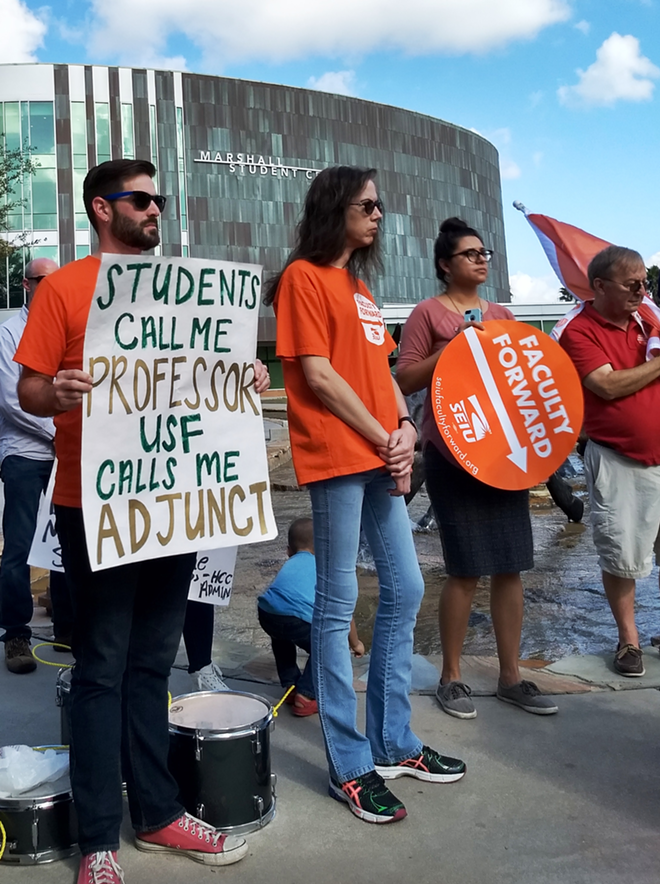 These concerns, voiced by a group of men and women protesting near the University of South Florida’s Marshall Center on Wednesday, are not those of the school’s debt-burdened students or the campus custodial workers.

These are the worries of professors.

Specifically, adjunct professors — those part-time, untenured teachers who increasingly make up a large percentage of those teaching classes at colleges and universities around the country.

Decrying low wages, lack of insurance and little job security, adjuncts are pushing for collective bargaining rights at colleges and universities across Florida, a decidedly unfriendly place for unions.

Last year, adjuncts at Hillsborough Community College voted 2-to-1 to form a union. In August, Broward College adjuncts filed for a union election. Leading the charge is the Service Employee International Union, which represents over 55,000 workers in the state, from nursing homes to city workers.

In a survey of 773 Florida adjuncts, released this week by SEIU, more than 43 percent of respondents admitted to using a food bank, taking out a payday loan or having utilities shut off. One in four surveyed say they are at risk for homelessness and nearly half skipped needed medical or dental appointments.

The survey was voluntarily and a critic, or cynic, might note that SEIU stands to gain politically and monetarily by convincing another large group of workers to give over even more of their money for dues.

But after hearing the stories of some USF adjuncts, including one who died of cancer earlier this year, one would be hard-pressed not to wonder if there are real problems with the current system.

One of those adjuncts with a compelling story is a slight woman with long brown hair, standing next to fellow teachers, union activists and a couple of Tampa politicians at the Wednesday protest, listening intently.

Tara Blackwell, 48, teaches cellular and molecular biology at USF, one of the few adjuncts in the department and a position she’s held for three years. She is an alum, too, who kept on studying after receiving her bachelor’s degree at USF until finally obtaining a doctorate in biology in 2012. Her dissertation’s topic includes words and phrases indecipherable to most people. Her experience in the field led administrators to allow her to design the coursework for some of her classes, she says.

Her compensation for teaching the state’s up-and-coming scientists? About $16,000 a year. That’s two classes a semester. She taught just taught one class each semester before — not her choice — and took home half that.

“That was when I had savings,” she says.

As for job security, Blackwell’s teaching contract comes up for renewal each semester, just like other part-time, non-tenured faculty. So, she can’t predict how much she’ll make the next semester. Or if she even still has a job.

But perhaps most worrisome, Blackwell, who estimates she puts in at least 10 hours a week for a course and usually more, does not receive health insurance through USF.

Luckily, she has Obamacare — “well, until the politicians take that away too,” she says. But the uncertainty of having some sort of medical safety net is especially unnerving, because Blackwell’s kidneys are failing.

Diagnosed with diabetes at six years old, the disease has taken its toll on her body through the years. So, between teaching classes, she visits a nearby hospital three times a week to undergo dialysis treatment.

Due to her health, Blackwell is seemingly stuck with a job flexible enough to conform to her medical needs, but also leaving no room for advancement.

“I’m actually one of the better ones,” she says. “I actually have insurance. I’m not on food stamps or homeless. Yet.”

So, for Blackwell and others looking for better teaching conditions, unionizing seems like the best option. Perhaps the only option.

“I’ve always been in favor of unions,” she says. “But now since it’s become a real bread-and-butter issue for me in my own life, I’ve gotten much more involved in it. It’s a lot more tangible now.” Alex Pickett
"I'm a proud Bull, but we are losing our way," says Guido Maniscalco, Tampa city councilmember from District 6. "Professors and teachers are people who shape and mold our children for the future."

In April, adjuncts filed the paperwork for a union election, which is the first step in the process. Since then, the USF administration has blocked a vote through various appeals and legal manuevers. SEIU, which has successfully organized adjuncts at Tufts, Georgetown and other universities over the last few years, is calling on the university to stand down and allow a vote.

“The breadth of what they’re asking is very, very concerning,” says Dwayne Smith, senior vice provost and dean of the office of graduate studies.

Smith stresses the uncertainty of the bargaining process is what makes administrators uneasy. He references some union activists’ calls for $15,000 a course, which he finds unreasonable.

“We could end up in a substantially worse place than we are now,” he says. “This university is working so hard to move forward and become a national and world player… I worry whether this vote would undermine the progress we’ve made.”

Smith also distinguishes between adjuncts who are retired professors or professionals in their field who teach to share their expertise versus the “gypsy professors” or “freeway fliers.” He prefers the latter term. (“Gypsy professors sounds pejorative to me,” he says.)

This last group of teachers “pursue adjuncting as a career,” he says, hopping from different colleges and universities in a metropolitan area to cobble together a living. Some have never had a job in their field, he argues, or finished a degree.

“I’m not in any way disparaging them or the role they play,” he says, adding later, “It’s a very questionable career choice and we would encourage our students to do something else.”

It’s worth noting that most employees at USF belong to unions: faculty, university police, grad students and other staff like cashiers and groundskeepers. When asked if those earlier unions faced similar pushback from the university, Smith nodded. “Probably.”

“We’re not oblivious to some of the issues that the adjuncts raise,” he says. “Regardless of the vote, we are prepared to look into ways to help them.”

For adjuncts like Blackwell, that vote can’t come soon enough.