A new exhibit at the Leepa-Rattner Museum explores technology's influence on art. 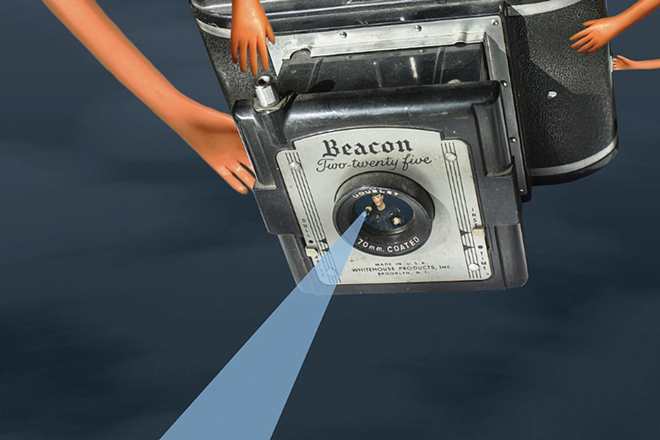 Michael Stone
Whitehouse Products by Michael Stone is a multi-image compilation created with digital photo-editing software. Currently on display at the Leepa-Rattner Museum of Art.

Photography was founded on a simple fact: silver salts react with light to form an image.

Thomas Wedgewood, Louis Daguerre, Nicéphore Niépce and William Talbot all used this reaction to make images in the 1800s, but Daguerre’s process was the most successful.

Instead of film, Daguerre coated a copper plate with silver, then exposed the plate to iodine, forming a silver salt. After this, he put the plate in his camera and took a photo. The silver salt darkens in response to light entering the camera, making an image. After exposing the plate to mercury fumes (don’t try this at home) and fixing the image in a salt solution (to remove its light sensitivity), you finally had your photograph. Because of all the chemistry involved, people soon began looking for faster and cheaper ways to make images.

At the same time, artists were trying to stand out by finding other ways to make photos. A new exhibit at the Leepa-Rattner Museum of Art explores some of these rare art forms.

In honor of Weird Science: Technology and Art, here are five ways science and tech have changed photography through the years:

Talbot used different silver salts on paper to produce what he called photogenic drawings. First he coated the paper with these salts, then he placed a flat object on top of the paper (plants were common), and covered it with a glass plate. When placed in sunlight, the paper darkened to produce an image.

Maggie Foskett invented a modern version of this technique in the 20th century. Foskett wedged biological specimens between glass slides, and projected their images onto photographic paper — paper that is chemically treated to react to light. Her Goddess of Our Moonlight is currently on display at the Leepa-Rattner Museum.

2. The invention of plastics paved the way for film photography

Kodak founder, George Eastmann, produced the first roll of film in 1888; it was made of paper. The photographs weren’t very detailed, so Eastmann hired chemist Henry Reichenbach to improve upon the idea. Reichenbach made his film out of a form of plastic called celluloid for more detail and flexibility.

Film, as we know it today, is a sheet of plastic coated with silver salt. Now, instead of treating a plate with chemicals, people could purchase rolls of film at their local drug store all ready to go.

Brett Jordan, via flickr
The first digital camera, invented by Steven Sasson in 1975

3. The invention of CCD image sensors made digital photography possible

Unlike early photography, which relied on chemistry, digital photography depended on advances in physics, engineering, and technology. In 1969, a couple of physicists at Bell labs invented a CCD image sensor to convert light signals into charge signals that electronics can read. Kodak engineer, Steven Sasson, was asked to develop a new camera using this technology.

Sasson made the first digital camera in 1975. Unfortunately, there weren’t many ways to store and view digital images in 1975. Sasson used a cassette to store his images and a TV to view them. It wasn’t until SanDisk, Panasonic and Toshiba invented SD memory cards in 1999 that digital cameras became practical enough for the general public.

With the popularization of computers and digital cameras in the 1990s came photo-editing software. These software programs replaced noxious chemicals and darkrooms. They also made it easier to alter and combine photos, making digital art.

More and more artists are using photo-editing programs like Photoshop to create one photograph from many. This blending of photos makes a composite image.

Here are a few examples: Charles J Sharp [CC BY-SA 4.0 (https://creativecommons.org/licenses/by-sa/4.0)], from Wikimedia Commons
Charles Sharp's flying monkeys are actually just one monkey, photographed multiple times, as he lept from one tree to another. Composite images like this are an excellent way to show movement.
click to enlarge

By Gary O'Brien [CC BY 4.0 (https://creativecommons.org/licenses/by/4.0)], from Wikimedia Commons
Composite photography is an oft-used method to show the stages of an eclipse and other astronomical phenomena.
click to enlarge

Photo mosaics are another creative way to combine images. This method assembles multiple photographs, like tiles, into a single image, as in Neil Farkas’ Mona Lisa.


You can see both ways of combining photos in Weird Science, which features Neil Farkas’ "One Flag" photo mosaic alongside composite images from George R. Booth Jr. and Michael Stone.

The exhibit also has solarized color photos from Joseph Constantino. This method of photo alteration, which is done either digitally or in a dark room, flips the tones in a photograph, turning dark to light and vice versa. Like cameras, x-ray machines produce an image. And though an x-ray of a broken leg isn’t exactly art, x-rays of plants, shells, and insects have made their way into art galleries and photography magazines over the years.

In 2016, San Diego’s Joseph Bellows Gallery exhibited a series of images from one of x-ray photography’s pioneers, Dr. Dain L. Tasker. Tasker was head of radiology at L.A.’s Wilshire Hospital in the 1930s, where he enjoyed taking x-ray images of flowers in his spare time.

Pinkel’s work is currently on display at the Leepa-Rattner. Her blue-tinged xeroradiographs result from a process she developed using a mammogram and a Xerox machine.