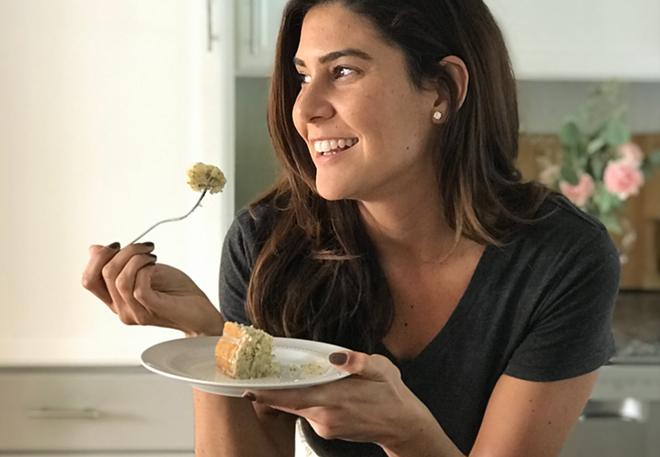 The veganized creations were a hit, and picked up by both local and national publications from Creative Loafing and The Zest Podcast to Totally Vegan Buzz and Veg News.

“Last year’s challenge started out as just something I wanted to do for my followers for fun but it grew into something so much bigger!,” Lima explained in an email to CL. “I ended up being featured in the national press, having a whole new audience find out I existed and publishing an ebook with the recipes that’s been sold to people around the world.”

As Season 11 approaches, (and airs on Friday, September 25 on Netflix) Lima announced that she will be buckling down and taking on each week’s bake off as a YouTube series.

“When a new season of the show was announced I started getting messages from people telling me they couldn’t wait for me to do it again and that only got me more excited about taking on this challenge one more time.”

This time around, the series will give viewers a more behind-the-scenes look as to why the baker chose certain substitutions or replacement for dairy and protein items. Not to mention a little color commentary from two of Lima’s closest non-baking pals, Ren Laforme and Taylor Gaudens.

“Every week I’ll be meeting with two of my friends who are also big fans of the show and we’re going to chat about everything that happened in the tent—our favorite moments, the disasters, the Hollywood handshakes!”

Lima says the trio has had numerous conversations over drinks about soggy bottoms and star bakers over the years, and she’s looking forward to sharing those tidbits with viewers. Come for the recipes, stay for all the hot gossip on Paul Hollywood and friends.

The Curious Cat Bakery founder says she’s more excited about how interactive this new series will be.

“Last year I did this challenge in a vacuum. I was by myself doing these challenges and sharing them with an audience I wasn’t even sure wanted it. This season is going to be a lot more interactive. I think it’s going to be a lot of fun for people to see my process and since I’ll be selling the recipes week by week it will give people a chance to take the challenge themselves. I can’t wait to see their creations!”

The baker also plans on compiling all of the recipes and transforming it into a recipe book at the end of the series.

Episodes will go live on the Curious Cat Bakery YouTube Channel the following Monday after the episode airs each Friday. If you’re all about the veganizing but don’t have time to watch the videos, Lima is also be repurposing the videos in podcast form on Spotify for you to get the lowdown while commuting, cleaning or even baking along.

Want in on the action across all channels? Subscribe to Curious Cat's Great British Baking Show Vegan Challenge mailing list to get the videos and tips straight from Lima’s kitchen. In the meantime, you can also grab a Kindle book version stocked with the vegan recipes Lima created for Season 10 on Amazon for $9.99.

Support a local journalist's sphincter in these crazy days. Our small but mighty team is working tirelessly to bring you up to the minute news on how Coronavirus is affecting Tampa and surrounding areas. Please consider making a one time or monthly donation to help support our staff. Every little bit helps.