WAHH will release its CD on Sunday, April 1 at Skipper's and on Saturday March 31 at Hideaway Cafe. 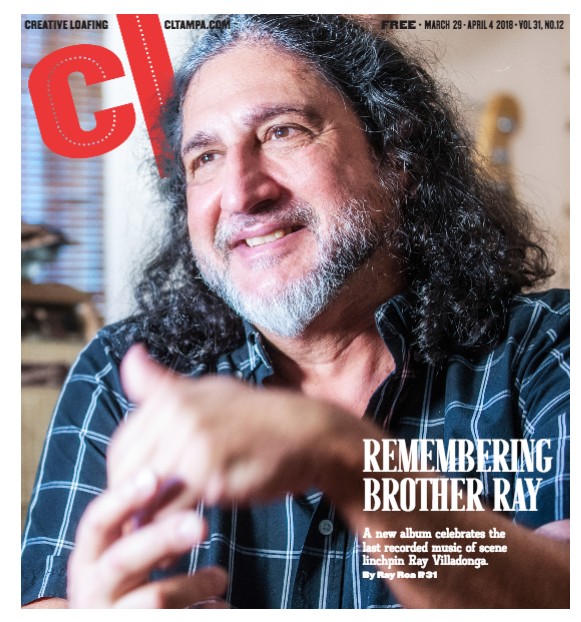 When Ray Villadonga died in June 2017, his daughter Katrina was expecting a son. Last fall, Gabriel R.J. Francois was born. Katrina told CL that the “R” stands for Ray and that her baby boy is going to know a lot about his grandpa.

“I’m going to tell him everything and anything. I’m going to make sure he knows just how much his grandpa loved him... and how I’m only the person I am today because of Dad,” she said. R.J. is six months old now, already smiling big and also making a lot of noise the way his grandpa — a music-scene linchpin with a deep love of Tampa — did until a year-long battle with stage-four pancreatic cancer came to an end.

“R.J. is great baby. We all wish my dad could have met him,” she told CL in a message.

A FORCE OF LOVE AND NATURE
Remembering Ray Villadonga, a linchpin of the Tampa Bay music scene

Katrina said that her family is doing OK and that people all cope in their own way. She is close to her brother, Ramon, and they lean on each other when times get toughest, but even seeing Ramon is hard, too, because he reminds Katrina so much of Ray, who was 62 when he passed.

“He’s a walking reflection of my dad,” she said. “Same kind of humor and wit.”

Just over one year ago, Ray Villadonga took to Facebook to declare that, “I’ve still gots lots of stuff to do. Music/art to create, booties to shake and smiles to make!” At two shows this weekend (one at Tampa’s Skipper’s Smokehouse on Sunday and another at Hideaway Café in St. Pete on Saturday), WAHH — the world-music fusion band Villadonga co-founded with composer and tabla player Shankh Lahiri — will release its new album, Brother Ray, which it began working on in early May 2017. In the month before he died, Villadonga spent four 12-hour days at Tampa’s Creative World Studio working on Brother Ray with WAHH and engineer George Harris. The album features some of his last unheard work.

“He worked extraordinarily hard to play as much as he could,” read the liner notes for Brother Ray.

“With steadfast passion and determination, Ray did what he loved to do the most — make music all the way until the end of his journey.”

“He can’t be replaced. He had a huge impact on our scene,” Philip Booth, bassist in Tampa outfit Acme Jazz Garage, told CL. He continues to be floored by Villadonga’s restless spirit, adding that Ray was always searching and evolving as a multi-instrumentalist.

“He was always up to something new... drawing from world music, rock, jazz, free improv, the avant garde, spoken word, and Tampa’s own homegrown musical and cultural traditions — his spirit was infectious.”

That spirit is all over Brother Ray. In the droning hum and hypnotizing vocal on the nearly 10-minute “Desire On Fire” and the modern-rock breakdown on album opener “Eternity.” It’s in every octave of the crazy wah-wah pedal on “Loony Luna,” and it shines especially bright on Brother Ray’s title track. The joy Villadonga brought to unconventional music is almost tangible on the effort, and Lahiri won’t soon forget it.

“I felt his presence all the way through our recording sessions to mixing,” Lahiri said, adding that he can hear Villadonga joking with him about composing a bassline that was more complicated than the ones Lahiri charted out for other members of the band. Lahiri — who met Villadonga nine years ago and played with him in another band, Rayzilla’s Dreamboats — says that Villadonga never got to finish recording “Brother Ray” since he was hospitalized during some of the sessions. At the release shows, fans will see world-renowned percussionist Selva Ganesh (a member of John McLaughlin’s group, Remember Shakti), who has been sitting in with WAHH, and a new bassist, Elias Tona, who has a similar fun-loving spirit. Lahiri, however, will always owe so much to Villadonga as the band continues to evolve.

“He always told us to ‘Do your mystic with conviction,’ and we’ll always keep that... he brings a lot of energy and fun into the band,” said Lahiri before noticing that he slipped into the present tense.

“It’s very difficult — I still I say ‘Ray is,’ he will be with us for forever.” Lahiri said, adding that he still dreams of Villadonga. Villadonga’s music gets to live forever, too, and Brother Ray will likely end up standing out as one of the more important albums in Bay area music history, but there’s one set of ears that the music hasn’t touched.

“Honestly I have not listened to any of my father's music since he passed,” Katrina told CL when asked if she’s heard any of Brother Ray. That’s understandable, and hopefully there will come a time when that’s possible, but even if that pain never subsides, there will still be new music from Villadonga that no one else except R.J and Katrina may ever get to hear.

“I have a few recordings of him singing personal songs he wrote for the family,” Katrina added. “I still have not sat down to listen to them yet. I’m not ready.”