The Grammy-winning fiddler and songwriter plays on November 11. 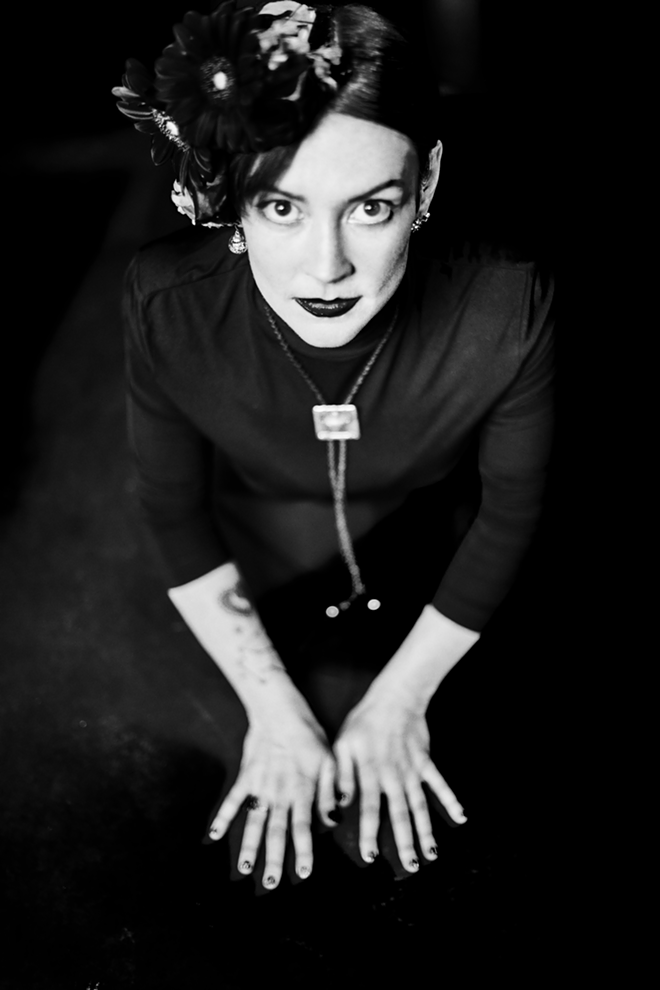 According to Amanda Shires, anyone should be permitted to dance in the aisles at her show, especially if she can be allowed to do so onstage.

“I dare somebody to dance more inhumanely than me,” Shires told CL in between laughing and speaking in her distinct drawl, a hybrid of the ones someone might hear in the Lone Star State and Tennessee. The 36-year-old songwriter was fresh off of a vacation to Hydra, where she went to the home of Leonard Cohen, looking for the late songwriter and poet’s spirit wherever she could find it. The holiday was a long time coming, too.

“Haven’t had one in over two years, a proper go to somewhere, be far away, and not do work — I forgot how fun that is,” she said. Her commitment to the job is understandable. Much of the last 24 months have been spent on the road touring behind 2017’s Grammy-winning album The Nashville Sound, which she and her husband — songwriter and once Drive-By Trucker Jason Isbell — recorded with his band, The 400 Unit. Shires got credit for fiddle, harmony and photography on the LP and also co-wrote “Anxiety,” but she arrives in Tampa Bay supporting her seventh solo album, To The Sunset, which saw release in August.

The effort clocks in at just over 30 minutes, and some of it finds her filtering fiddle — the instrument that first taught Shires how to express herself — through pedals, which is a slight departure from the sound she’s built since releasing her 2007 debut, Being Brave. At times, Sunset certainly feels like a dance record, but lyric lovers could spend weeks poring over the 10-track album’s liner notes; Shires might’ve done just that in the past.


Shires admitted that she can spend up to four hours absorbed in the placement of one preposition. The writing for Sunset was different, however, thanks in part to her studies (she has a master’s degree in poetry from the University of the South in Sewanee, Tennessee) plus the days and nights Shires spent inside a closet at her home (she and Isbell work there to catch a break from their now-three-year-old daughter Mercy, who was getting into everything at the time). Shires doesn’t think people need an advanced degree or any knowledge of poetry or writing to write good songs, but it definitely helped her.

“I needed that in order to be able to trust myself and to confidently choose a direction, because every direction to me feels like a right direction so often that I get stuck in all of the choices rather than finding the clear path,” she said.

“I needed some real exercise as far as being able to put words to such abstract things as my feelings.”

Even more revealing than talking to Shires about her emotions, and the unorthodox lens through which she sees the world, is the act of listening to her records. In the course of just 25 minutes, Shires can show someone a lot of herself. For starters, there’s the self-doubt, which she deals with daily just like everyone else.

“Life has a way, sometimes, of dragging you down and dragging you through the mud. I think self-doubt is a good thing, and that’s fine,” she said, adding that it makes her try to work harder. There’s also the confidence, which she mostly feels after getting a nice batch of work done. Shires also believes that dark times have the opposite, exact amount of light waiting on the other end.

“You might be this sad one day, but that means your potential to be that amount of happy is there. I try to focus on things like that.”

Shires also focuses on her daughter, who teaches her new things all time.

“I never once thought that sitting on a person’s shadow might be bad, but I sat on Mercy’s shadow, and she said, ‘Get up! Get up! You’re on my shadow,’” Shires explained. “The way that a child learns and sees the world has been described in so many cliché ways in the past, but it’s true.”


Still, perfect parents do not exist, and Shires knows that no amount of good parenting makes up for an unhappy parent.

“You have to put your air mask on before you can help anybody else,” she said, simplifying another life lesson she’s probably spent countless hours scrutinizing.

“I’m trying to be accountable and responsible for my own actions and my own happiness first, so that I can serve her as well as I can.“

Shires won’t have to reach far to grab happiness when she finds herself back in the Bay area. It’s her first show since a December 2017 set opening for part-time Gulfport resident John Prine, who sometimes picks the family up and takes them to a movie or the beach. In fact, Shires has many friends who live here and has been in love with this neck of the woods since before she knew Prine.

“When I think about Tampa, I cannot help but think about all of the good times and the good friends I have met along the way. Coming back always feels like a homecoming for me. I’ve spent a lot of time walking around, eating food, drinking wine into the wee hours,” she said.

When she looks out into the crowd on Sunday, Shires hopes to see fans hearing and seeing the wildness of the show. She calls it that “thing where you sometimes think you have your hand on it, but then you don’t quite have it, and then you do.”

Fans don’t have to dance if they don’t want to, but maybe they’ll tap their toes. At the very least, Shires hopes to find even more reasons to love coming back to Tampa Bay.