For years, Saint Somewhere Brewing Company has had a place on the shelves of craft beer stores across the country, alongside some of the best specialty beers from around the world. The hometown brewery has built a name for itself on distinguished farmhouse-style ales, highly regarded by online reviewers and poured out of taps as far away as Nova Scotia.

Despite this, many people in Saint Somewhere’s neck of the woods have never heard its name. But the brewery’s new tasting room, recently opened to downtown Tarpon Springs, will help showcase what they’ve been missing.

Farmhouse ales, or saisons, are rustic, yeast-driven beers native to Belgium and France. For Saint Somewhere founder Bob Sylvester, who calls the style antique, they hearken back to another place and time. The tasting room, dubbed Brasserie (that’s a French term for an informal restaurant or brewery), is an ode to that idea.

Sylvester was attracted to brewing farmhouse ales in part because the style lends itself so well to experimentation and variety of flavor. Incorporating different strains of wild yeast adds another layer of complexity. After 10 years in operation, Saint Somewhere’s roster of ales is briefer than many found on local taproom boards, but the quality and thought behind each one is apparent; the brews are interesting enough for multiple tastings, proving that beer can be as sophisticated as wine and still fun to drink.

At the moment, the house beers on draft at Brasserie Saint Somewhere are Jasmine, a jasmine tea-infused saison; Assoiffeé, a tart table saison; and Athene, a light and airy ale with a balance of tart fruit and spice.

Eventually, the count will stay at around six, in addition to four guest taps. Sylvester says that, as long as it’s viable, he will serve strictly French and Belgian beers, with the exception of U.S.-based breweries Jester King and Jolly Pumpkin, whom he considers some of the best makers of farmhouse ales.

There’s a cooler of curated bottles to choose from as well. According to the founder, they’ll always be priced reasonably, so as not to inhibit anyone from trying something new.

The taproom, which allows him to share the stories and craft behind his beer directly with customers, has been a long time coming. Sylvester has wanted to open one since he started Saint Somewhere in 2006, but tasting rooms weren’t technically legal then, so he started with distribution.

After years of searching for the right place, the perfect opportunity arose in the form of a two-story, early-20th-century house with a wraparound porch at 312 E. Tarpon Ave. A building directly behind it was also for sale, so the founder bought both and relocated his brewing operation from its old location in an industrial complex. Overall, the structure was good, but the interior and roof required intensive renovations.

The tasting room is a visual treat that complements the rustic beers on tap, a Floridian take on a Belgian beer bar. There are cozy, separated rooms, a fireplace with a Sunshine State landscape hanging over top, fresh-cut flowers on the tables and old photos lining one wall — all relatives of Bob and his wife Anne.

A striking centerpiece to the taproom, where their daughter Caroline works, is the bar area. The wood-carved back bar was built in the 1920s and was in service in France, while the front bar and lighting were saved from the Belleview Biltmore Hotel. Anne, who handles the business operations of the brewery, helped imagine the interior, including the soft color schemes.

In the spirit of a country inn, several guest rooms upstairs will eventually serve as spaces for visiting brewers who stop in for collaborations and workshops, continuing the discourse on the art of saison-making.

Sylvester currently has one additional “worker” on his staff, an intern who came a long way to do just that. Jake Miller has worked for Prairie Artisan Ales in Oklahoma and Oregon’s Wolves and People Farmhouse Brewery. And now, he’ll learn from Sylvester's decade of brewing one of Tampa Bay's best-kept secrets. 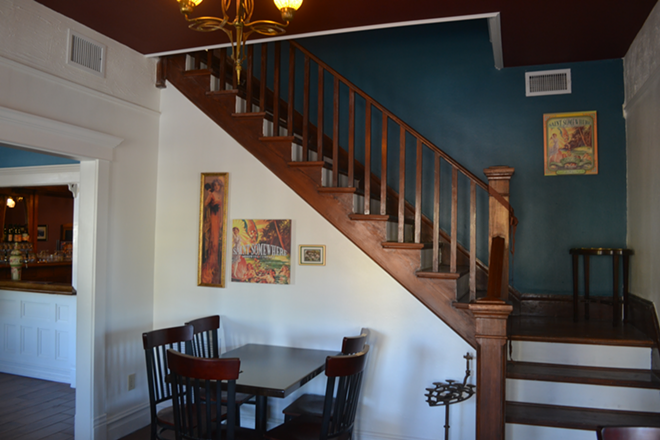 Ryan Ballogg
The taproom of Saint Somewhere, whose name has its origins in a Jimmy Buffet album title; Bob and Anne are self-described Parrotheads.
© 2022 Creative Loafing Tampa Bay