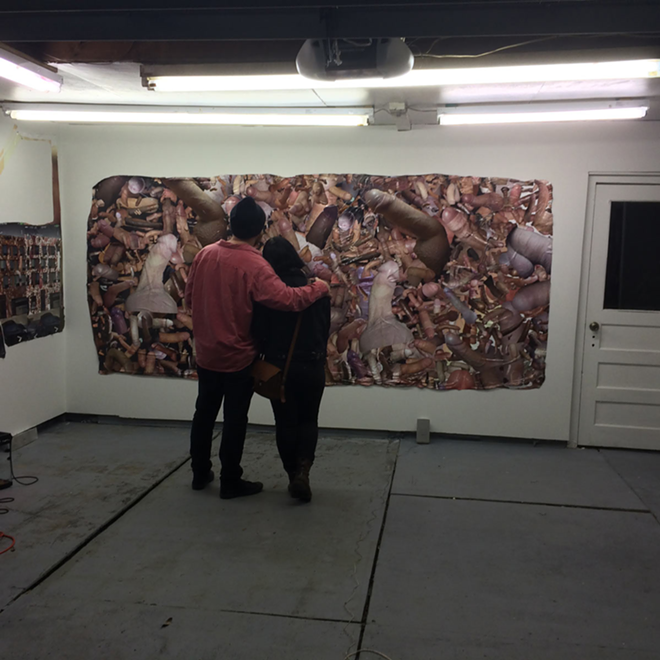 Ben Frain
This penis mural, formerly part of a van wrap, objectifies the penis and depicts it as Laconian (a symbol of power.)


Some of the more unlikely objects you’ll ever see proposed as art comprise the centerpiece of Ben Fain’s solo exhibition, Dreamcatcher. One is a commercial vinyl van wrap printed with photos of erect penises downloaded from the Internet, cut and peeled off the van and mounted to a gallery wall.

At first blush, the piece is grotesque. Maybe I’m revealing too much about my own sexual predilections, but who really wants to see hundreds of engorged cocks blown up to larger-than-life proportions, their hairless pink testicular skin gleaming on puckered vinyl? (I’ll take my engorged cocks one at a time, thank you. Two, three at a time tops.) Cranking up the absurdity, Fain collages these dick pics into shapes including a humanoid figure and a dinosaur resembling a cross between a T-Rex and a boxing chicken. He adds a few floating vulvas to the mix, and gives over the rear van panel to a saccharine stock photo of a mother and baby. Ben Frain
This mural, the only non-penis part of the van wrap, now hangs next to the "wall of penis" at the new Coco Hunday space in Seminole Heights
After the shock of the pornographic wears off, Fain’s piece slowly oscillates between the conceptual and the intuitive; the former, a wickedly funny smash-up of American marketing mania and sexuality in the age of the Internet, the latter an inscrutable dream object where Photoshop meets the Freudian unconscious – or, as Fain prefers, the Lacanian phallus (an object linked to symbolic power rather than biological sex.) Fain weaves adroitly between the two modes, creating objects that are at once witty and unsolvable – things that stick with you, whether you want them to or not.

A theme emerges in another piece: a shopping cart loaded with dead palm fronds and branches adorned with small pen drawings of a man breastfeeding a baby, drawn on junk mail envelopes.

“The show has a lot of imagery that is meant to struggle through the concept of mothering and the acquisition of sexual identity,” says Fain, who became a father last year. “That said, ask me the same question in five minutes and I’ll feel differently. I’m thinking through it while I’m making and then trying to be alive to what it churns up.”

To create the van wrap, Fain enlisted a local fabricator. To construct a video in the exhibition that pays homage to a spam email he received last year, he hired half-a-dozen animators and performers through Fiverr, an online creative gig market where workers vie to create everything from television commercials to mobile phone apps for $5. Using the email’s nonsensical text as a script, Fain commissioned segments narrated by a talking dog, an animated space alien, and a (live) ventriloquist and dummy. Strung together, the segments comprise a trippy video poem that left me feeling a combination of repulsion and admiration for the Internet culture of visual garbage and penny labor.
The setting for Fain’s show is Coco Hunday, a new art space housed in the garage — fittingly enough — of a Seminole Heights bungalow. Fain’s work spreads into the home’s porch, driveway and some interior space. Jason Lazarus, a Chicago artist who moved to Tampa last summer to teach photography at USF, lives in the bungalow. Lazarus created the venue to showcase emerging artists from across the U.S. This isn’t Lazarus’s first foray into running a gallery: During graduate school in Chicago he operated a space called Jesus Chrysler, an experience he says “doubled
my education.”

“As an artist myself it is a great growth experience. I work deeply with the artists to mount something site-specific, experimental and engaging,” Lazarus says.

In major cities, where big ambitions collide with small square footage, apartment galleries are common, a practice that surged, then abated in Seminole Heights when four artists transformed a mother-in-law cottage into a gallery called Epoxy in 2014. It lasted about a year; the closure of two other neighborhood spaces — Workspace and the Hatchway Gallery — further thinned the First Fridays Seminole Heights roster. Along with his previous experience and wide-ranging contacts, Lazarus brings fresh energy to the task of running a gallery.

“As a new Tampa citizen I feel a sense of possibility in Tampa, that it’s a city where time, space and economics beg for experimentation and community building,” Lazarus says. “It is my hope that the space becomes yet another local model for how to create your own cultural landscape and encourages more young artists and cultural producers to follow suit.”