Sylvia Rusche is the 2018 MUSE Award winner as Patron of the Arts. 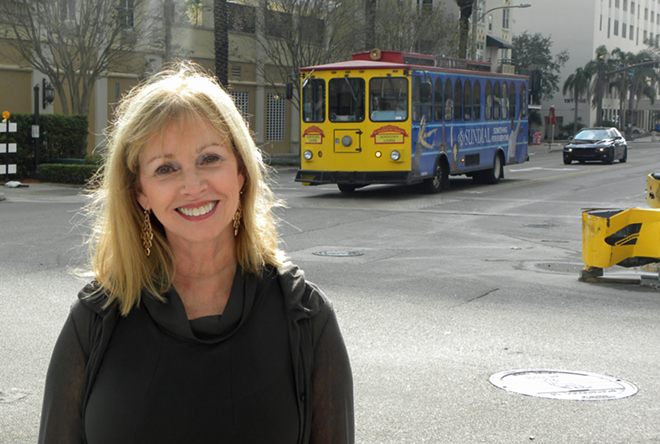 Bill DeYoung
“The people of St. Petersburg are the reason I have anything that I have, so why would I not want to support them?” asks Sylvia Rusche. “Especially since many in the arts struggle.”

Fourth in a series

The arts have always played a prominent role in Sylvia Rusche’s life, all the way back to her teenage years as an aspiring ballet dancer in a stubbornly culture-resistant Louisiana town.

“Being raised in small Southern places, there’s not a lot of opportunities for exposure to visual arts and performing arts,” says this year’s recipient of the MUSE Patron of the Arts award. “So going off to school, and being able to go to big cities and see a lot of really good art, certainly was formative.”

After college in Texas, Rusche danced with the Little Rock Ballet, Twin City Ballet Company and a couple of others. For a Deep South girl, it was like seeing the world for the first time.

“Another real big takeaway for me was I grew up and performed with kids who were sometimes a little bit fringe, weird, that sort of thing.”

Those were always the kids that made the biggest impression on her.

Rusche gave up dancing in her 30s, when her body (and the demands of family life) insisted. She had plans to go to grad school, with the goal of teaching dance at university level.

“My husband at the time came home and said ‘State Farm is hiring women. How would you like to be an insurance agent?’”

Rusche recalls her response with a roll of the eyes.

“I said ‘I think I would rather eat dirt. Or watch paint dry. I can’t think of anything more boring than that.’”

But sign up she did, and she’s been with State Farm ever since. As a divorcee raising three daughters, she moved to St. Petersburg in 1989, and hung out a shingle in ’92.

“I never aspired to be a business person,” she says. “But what being in that business has afforded me is the monetary ability to do a lot of things that I would’ve never been able to do as a ballet dancer. Or as a teacher in a university.

“Not to say I haven’t enjoyed my career — there are some aspects I have enjoyed. Was it ever a burning passion? I don’t know that I can say that. But I had children to raise, essentially on my own, and necessity is the mother of invention.”

St. Petersburg in the early 1990s wasn’t a vast cultural wasteland, but it was still a far cry from the thriving arts center it would become.

“I looked around for opportunities to see and experience things,” explains Rusche. “We didn’t have a ballet company. We didn’t have an opera. And so I thought well, I’m just going to keep going to New York as much as possible. Which is what I did.”

Once her girls were grown and out of the house, she started to devote her time, energy — and pocketbook — to her local arts scene.

“The people of St. Petersburg are the reason I have anything that I have, so why would I not want to support them?” she muses. “Especially since many in the arts struggle.”

She takes pleasure in “seeing it succeed, whatever ‘it’ happens to be at the moment.”

She was a founder of Movies in the Park, the free cinema series in Straub Park, in 2009. For five years, she financed and produced a series of concerts by independent Americana musicians — one of her strongest passions — at [email protected]

Rusche, who doesn’t think of herself as a philanthropist, is a longtime supporter of freeFall Theater.

“Brilliant work, I saw that at the get-go,” she explains. “There’s no one in this area, or even South Florida, doing work this fantastic. And I felt very compelled to be in on that. Because you always wonder ‘Will they last?’ If people don’t help them, they won’t.”

Rusche, says artistic director Eric Davis, is “the consummate arts maven. Her knowledge of so many different disciplines runs deep, and her support of freeFall has been instrumental to our development. As a well-traveled and adventurous theatergoer, she is the kind of cosmopolitan patron we dream of.”

“She is truly a pillar of our community,” Davis adds, “supporting so many of our local arts and other not-for-profit organizations, not only financially, but through her attendance, her sage advice, and her incredible hospitality — for artists that reside here and those from elsewhere that we host for a short time.”

She’s served on a couple of boards, but she’s not a fan of sitting around talking about stuff. Sylvia Rusche prefers action and activity.

“I don’t want to be on the board of freeFall at this point,” she admits. “When I’m not working any more, I might do that. For them.”

“The ones I support, I feel strongly about,” she says. “Either from the standpoint of they’re doing excellent work, or they need a leg up — maybe to get to the next level — and is that something I can do? And will this benefit the community as a whole?”

Not so long ago, Rusche realized the enormous windows of her office — on the corner of 1st Street and 1st Avenue North — could serve as advertisements for local artists. “I thought, ‘Why would I waste all this space, or put up posters that say ‘Buy insurance’?”

Four times a year, the lobby walls of Sylvia Rusche Insurance Agency become a boutique gallery, with the featured work of local artists. She only advertises it through Facebook; even so, the opening receptions are well-attended.

“Someone gets to talk to the artist about what their process is, or why they do what they do. Some people sell their work. And it’s been the most fun thing. And it just costs me whatever the wine and cheese costs.”

Thus Sylvia Rusche, the fan, the cheerleader and the reluctant philanthropist, continues to combine business and pleasure. “Three people in the last month have come into my office and said ‘Is this an art gallery?’” she laughs. “And I say, ‘Well, no, it’s not nearly that sexy, but you’re welcome to come and look at it.’”