Up in smoke: Fuma Bella won't be in Ybor for much longer

The beloved hole-in-the-wall is expected to close this month. Go have a drink before then. 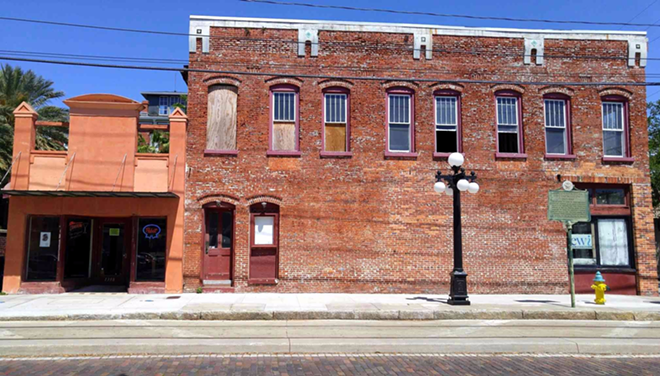 Meaghan Habuda
There's still time to visit Fuma Bella (left), which shares the property with the historic building that used to house the Orpheum, before the bar closes its doors.

“This is not a drill,” reads the March 27 Facebook post from Fuma Bella. The update, which has understandably bummed out many regulars and admirers of the tiny cocktail lounge, revealed that the longtime bar’s time in Ybor City is coming to an end.

“As much as I hate to say this, it looks like Fuma Bella will be closing permanently soon, most likely sometime in April,” the post from Monday bartender John Morgan continues. “The gentrification of Ybor marches on. Sooo...... If you love this place and the people that work and drink here like I do, then get your ass out and say a final farewell.”

As Fuma manager Durke Schmidt put it, when he came on four and a half years ago, a cigar bar and lounge-type project called Arturo Fuente was planned for the red brick building next door to Fuma (the bar at 1318 E. Eighth Ave. and building have separate addresses, but are part of the same property). That project didn't take shape, and time went on. But according to public records, there's something new in the works.

On Jan. 24, the Barrio Latino Commission approved a historic preservation tax exemption for the rehabilitation of 1902 N. Avenida Republica de Cuba (the red brick building). A development called The Factory is set for the building, whose plans include the reconstruction of the previously removed balcony and the demolition of its one-story non-contributing structure (the non-historically significant part of the property), a.k.a. Fuma, confirmed Dennis W. Fernandez, Tampa's architectural review and historic preservation manager.

“With the whole west end of Ybor changing, they just decided it was time for it to come down,” Schmidt said of the bar that's a neighbor of New World Brewery, which is isn’t going anywhere for now, and the Don Vicente de Ybor Historic Inn that’s being redeveloped, among others. “It’d been in the cards for a long time, but it took this long to actually happen.”

Opened in the late ’90s, the beloved Fuma next to the Church of Scientology has been a gathering place, and a literal hole-in-the-wall due to its modest square footage, for locals seeking stiff, well-thought-out drinks and cozy atmosphere off the main drag of Seventh Avenue — and for passersby fortunate enough to catch the “open” sign hanging outside.

“You could sit and have a good drink, or have a good conversation for that matter, with someone who you might not even know,” Schmidt said.

“For a bar that size that takes cash only, that’s a good run.”

They weren’t trying to keep the closure of the bar a secret, he said; they just weren’t sure about a date, and Schmidt’s still not 100 percent. Two months or so ago, they thought the bar might close in the beginning of April, but now it’s the end of the month.

“That bar is probably — 90 percent of the people there are regulars, and they’ve been die-hard regulars. Everyone’s pretty bummed,” he said.

Reopening somewhere else isn’t in the cards at the moment, though there has been a little discussion.

“We’re just gonna kind of see what’s going on in Ybor and see where things end up. After I rest a little, I might be like, ‘fuck it, I need to do something,'” said Schmidt, who says slinging whiskey is in his blood. “[Fuma] really is a cool place not only to work, but to hang out. Who knows. Maybe it’ll be time for me to open something like that in Ybor.”

Those looking to get their cocktail on, one or a few more times, before Fuma bids the district farewell should stop in from 8 p.m. to midnight Monday and Tuesday, 8 p.m. to 1 a.m. Wednesday and Thursday, 8 p.m. to 2 a.m. Friday and Saturday, or 1 to 8 p.m. Sunday.