Miles, and Miles Ahead: On Don Cheadle's Miles Davis biopic

Balancing truth and narrative fiction, the ambitious film doesn't quite capture the iconic musician, but at least the soundtrack proves solid. 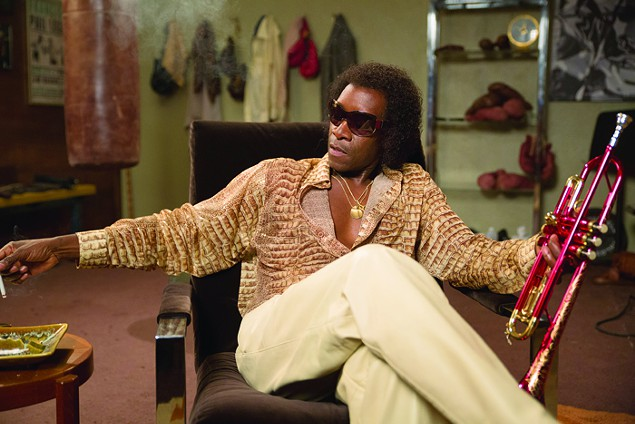 “If you’re gonna tell a story, come with some attitude, man,” Miles Davis, played by Don Cheadle, rasps to his interviewer. “Don’t be all corny with the shit.”

The admonishment is part of an opening-credits sequence of the film Miles Ahead that quickly establishes the jazz legend as a controlling, cantankerous son of a bitch. And he was very much that — as I experienced firsthand during two interviews with him, albeit on the phone.

The lines also serve as a sort of mission statement for the movie. With Miles Ahead, Cheadle, in his directorial debut, has crafted anything but a typical biopic. Instead, he’s made a film that’s part caper movie, part warped buddy picture and part character study. With its wanton mix of history and fiction, Miles Ahead is likely to be a letdown for jazzionados who feel one of the genre’s titans deserves the same full-scope biopic treatment accorded Ray Charles, James Brown, Johnny Cash, The Doors, Loretta Lynn, Buddy Holly and fellow jazz godhead Charlie Parker (Clint Eastwood’s Bird).

Miles Ahead’s fictional conceit finds Davis — with the help of a shady journalist (Ewan McGregor) who’s been hounding him for a story — going to any lengths necessary to recover a stolen tape reel, music that’s ostensibly meant to kickstart the trumpeter’s moribund career. The quest for this MacGuffin involves drug buys in college dorms, chase scenes, fisticuffs, even gunplay. And arguments. Lots of arguments.

In the film’s most counterintuitive move, all of this happens in the late 1970s, during a prolonged period of inactivity for Davis, when he holed up in his Manhattan townhouse, vacuuming up coke, idling around in his pajamas and stewing. At one point, Davis’s eyes land on his neglected trumpet and he blurts, “Fuck you lookin’ at?”

Thankfully, the action cuts to several flashbacks touching on milestone epochs in Davis’s long and obstinately eclectic career. We witness a dapper, clean-cut Miles — he was long celebrated as a style icon — in the studio with Gil Evans, strategizing over the large-ensemble Porgy and Bess album from 1958; on stage during the late ’50s/early ’60s Kind of Blue period; rehearsing his mid-’60s quintet (with an eager Herbie Hancock in heavy horn-rimmed glasses).

The latter segment is interrupted by Davis’s wife Frances Taylor, who intercepts a phone call from one of his paramours. The trumpeter storms upstairs, which leads to a vicious argument that ends with the two in a brawl.

The subplot chronicling the doomed relationship with Frances (played by Emayatzy Corinealdi) attempts to … what? Riff on Davis’s unremitting anguish? Wedge in a romantic narrative (including a decidedly unsexy sex scene)? Portray Davis’s abject misogyny? Probably all of the above — but it's the least effective part of the film.

Cheadle gets good marks for his performance. He has the ravaged voice, the arrogance, the disgusted facial expressions — the unrelenting defiance — down pat. But he selectively softens and leavens those core characteristics with sensitive and humorous moments. Cheadle’s Miles is often bemused by hero-worshipping sycophants (if he thinks they serve a purpose).

He has a grudging admiration and sympathy for “Junior,” a young junkie trumpeter who’s arguably his heir apparent (and perhaps a younger version of himself). A late scene, set in Davis’s home studio, captures the two working on some of the feeble jams from the recovered tapes (after risking life and limb to retrieve them, they turn out to be crap). But Junior hears real music hidden in the organ noodling on the reel. Miles, ignoring the pain from a gunshot wound in his hip, sits at the piano and coaches the youngster on how to voice a chord. Journalist Dave looks on, finally beginning to understand: Music trumps all. It’s the film’s best scene. There should have been more.

True to its opening manifesto, Miles Ahead does indeed bring the attitude. But its gangsta focus ultimately renders such a complex figure inscrutable — often little more than an ornery bastard with tacky clothes and a bad hair choice. The film offers glimpses into his fiercely independent genius, but ultimately one walks away from the movie lacking a true portrait of the artist.

During his 44-year recording career, Miles Davis made music that ranged from suave to frenetic. That’s a rich trove of material to choose from when putting together music for a movie.

One of the film’s successes is the way in which it utilizes Miles’ oeuvre in effective, even sublime, ways. Noisy tunes from his ’70s electric phase (“Black Satin,” “Duran,” Go Ahead John” “Prelude, Pt. 2”) provide ideal backdrops for fight and chase scenes. Earlier stuff — the iconic “So What,” “Miles Ahead,” “Seven Steps to Heaven” — adroitly serve as flashback signifiers.

Much of the music in the movie, including all the abovementioned, has been assembled into a worthy album, Miles Ahead: Original Motion Picture Soundtrack. There are better Miles primers out there, but this disc serves as a valuable overview. The songs are interspersed with short snippets of dialogue in Cheadle’s version of Davis’s shredded croak.

The producers assembled studio bands, including Miles interpreter Keyon Harold, for a handful of new tunes. Best of these is “What’s Wrong with That?” (featuring Hancock and fellow Miles sideman Wayne Shorter), a funky throwdown that the ensemble plays over the closing credits.It makes up the most joyous minutes of the film.