Where there's a Will: Tampa songwriter Will Quinlan is readying four new LPs A conversation with Will Quinlan can go a few dozen different ways. Last Saturday, tucked into the darkest corner of a Seminole Heights bar, the Tampa singer-songwriter is in a well-worn black T-shirt, jeans, and boots. There’s just enough light beaming across his cap to cast shadows on a beard that has maintained a healthy level of color despite Quinlan’s many years of service to the area’s rich songwriting tradition. He seems rested and at peace. It might be because he’s been working a lot. Maybe it’s because we’re on our first beer. It most likely has something to do with the new-to-him computer he’s checking out and clicking about when we shake hands.

“I’ve got some friends who work on these, it’s like a brand new MacBook inside, but the body is old,” he says while the glow of the screen illuminates the bespectacled, familiar face longtime fans of Tampa Bay’s Americana scene have come to know. “This is the last MacBook they made with the whole selection of audio ports.”

He’s right. New Macs slim down on inputs, which isn’t exactly an ideal situation for guys like Quinlan, who does a lot of auditory spelunking while relying on technology to help keep sonic ideas in order. A reliable machine is especially important these days because Quinlan’s creative mind has been much more of a well-oiled apparatus, too. The sturdy, always-gigging songsmith who hasn’t released an album since 2008’s gorgeously melancholy Navasota tells CL that he’s actually working on four different albums.

“A solo album, two with the Holy Slow Train, and another with the Vesper Bell,” he explains, pulling up various mixes in different stages of development. His friends are all over the material. Pohgoh and Rec Center frontwoman Susie Ulrey sings harmony tracks on a demo of “Resurrection Blues,” where her high-mid and high-low vocals are lifted above a pair of Quinlan’s own low and midrange tracks. Francis French III, who also provided high harmony vocals on Navasota, is on the track, and so is Tampa multi-instrumentalist Andy Feldman, a player on a multitude of Bay area classics including Have Gun, Will Travel’s most recent album, Science From An Easy Chair. Have Gun frontman Matt Burke even plays banjo on the track, all while Benjamin Booker drummer Max Norton lays down beats.

LISTEN: Will Quinlan shares a mix of "Resurrection Blues" from a forthcoming solo LP

The credits on the rest of the new stuff are equally robust. Rebekah Pulley, Rob Pastore, Jimmy Rice, Scott Anderson and Shawn Kyle represent just a portion of the talent Quinlan tapped to appear on tracks from the upcoming solo album, titled Articles of Redemption, which is 65 to 75 percent done.

“Shit, it’s tough,” Quinlan says about knowing when a collection of work is ready to share. He says you’ve got to listen for the things you want to hear and then “trust the songs to tell you when it’s enough.”

Speaking of knowing when it’s enough, Quinlan admits that physical and emotional struggles sometimes make him feel like he’s had enough of playing and performing altogether. “There are ongoing struggles,” he says, “that fucking demon of self-doubt and concerns of artistic validity.” He also has to lean in to hear questions because he’s lost hearing in his left ear, which means he has to tilt his head to hear the monitors when playing live, which creates chronic pain in his neck.

So what motivates him to keep playing?

“I’ve been very fortunate in the local scene with the deeply generous support of fellow musicians,” Quinlan says, adding that he wants even more of them to contribute to the material he’s working on. “My peers, the promoters and venues have been the continued support that helps me move past all of it and keep moving forward. It’s the people that come out to the shows. They help me to believe I’m not a total fuckup.” 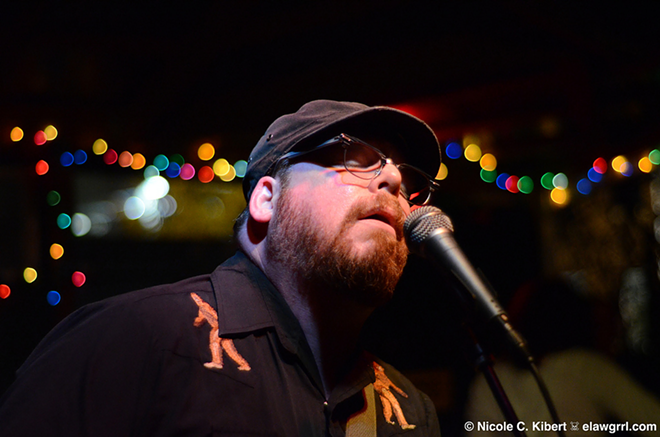 Quinlan can talk at length about the things he’s almost totally fucked up, too. Pointing to a well-muscled young man sitting nearby, he tells CL about a whiskey-fueled hothead who used to nitpick at fellow bar patrons in the wee hours of the night. “There were times when I would walk up to that guy and give him a little hell just because... thankfully, I’ve moved on from those days.”

That energy is clearly poured into new songs. Material meant for Quinlan’s new band, the Vesper Bell, has more of an indie feel, moving him out of the Americana box. His vocals have even ventured out into different timbres and tempos. He says it has a little to do with some of the new, female-fronted rock he’s been soaking in. “I’ve been listening to a lot of Mt. Moriah, Sharon van Etten, September Girls, and Sarah Jaffe,” he says, adding that even more punk-oriented outfits like Bully and Girlpool have all helped steer the direction of new material.

For now, all of that material is being shared with close friends and collaborators. Quinlan won’t commit to any release dates, only divulging that he’s playing a lot of new material out live whenever he can. There’s a lyric in “DOA,” a song set for that forthcoming Vesper Bell record, where Quinlan says “the face of God is overrated.” His delivery of the phrase sounds particularly disappointed, and it’s a wonder how much of it is meant to be taken completely to heart.

“That one touches back to a time when I was growing particularly unfond of organized religion and all the certain hypocrisies I was finding,” he says. His last name suggests an Irish Catholic upbringing, and the topic, when brought up, conjures a reference to Quinlan’s mother, who passed away before he completed Navasota.

“My mom was religious, but she didn’t talk about it a lot,” he says in a hushed tone. “She expressed her faith more in her actions than her words.”

In that moment, Quinlan’s future becomes a little clearer. If albums were currency, then followers might not have a lot to bank on. However, those paying attention — especially the ones who’ve been making new music with him in the studio and onstage — still have a lot of faith in Quinlan. They know that his actions will bring a bountiful harvest of new music soon.