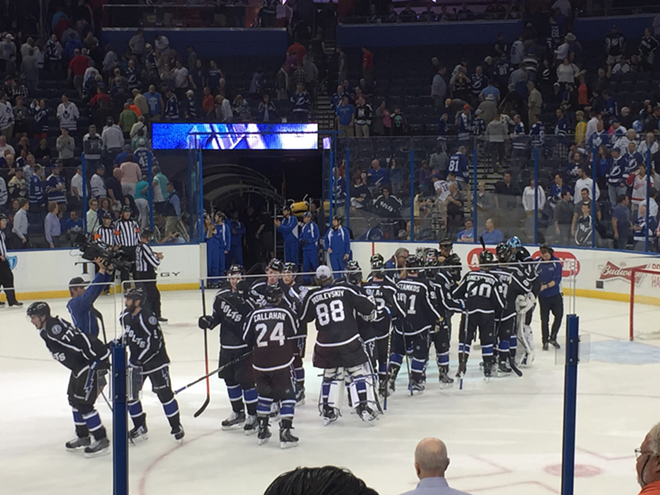 
The Lightning’s right wing Ryan Callahan was sidelined Monday evening after being sent to the hospital and undergoing an emergency appendectomy. After the morning skate today, Coach Cooper said that doctors got to it before it was really bad and that the appendix hadn’t ruptured. When asked about Callahan's recovery time, Cooper joked, “How long do we have until the game tonight?” adding, “He’s a leader on our team, he plays with passion, grit and you win with guys like him.”

Callahan was released from the hospital, though the timeline for his recovery is unknown at this time.

He’s done nothing but elevate the Bolts since he was traded for Martin St. Louis last year, but the other players are strong enough to carry the team to a win tonight. The Lightning just need to display the tenacity they showed when they won the first round of the playoffs in game 7 against the Detroit Redwings.

A lot of people thought the series against Montreal was all but over after the 3-0 deficit, but the Canadiens have been somewhat of a different team since then, bringing the series to 3-2. At this morning’s news conference Stamkos reflected, saying, “It’s just desperation. They [Montreal] are playing with their backs against the wall and know they have to give their best every night in order to extend their season. We haven’t matched that desperation … we played and got some results, just not the ones we wanted.” Desperation does funny things to players, and maybe that’s the shift the Lightning need tonight.

After Saturday’s tough loss, with Montreal scoring a second goal that ultimately won the game late in the third, the Lightning have home ice advantage tonight at Amalie Arena and the opportunity to play in front of their fans. Hopefully they play a much better game than they did on Saturday. A key to success for the Lightning has been to start off the game strong and finish stronger — they need to play a little mad, a little angry and be a little more crisp. If they stay focused and keep the winning mentality underneath all of that anger and anguish, they could send the Habs home tonight.