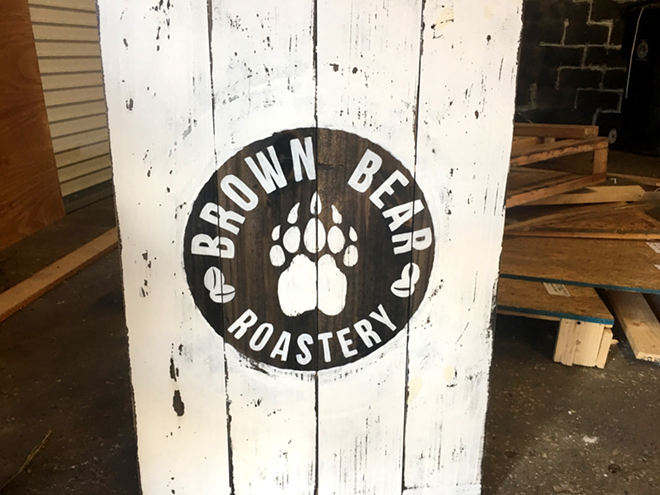 Rishi Ramkissoon is the main guy behind the specialty coffee roastery, located inside an Ybor City warehouse at the corner of East Seventh Avenue and 34th Street.

About a year ago, Ramkissoon started roasting with a red Sonofresco roaster inside the office of Pinellas garage where he'd store his BMW M3. The Sonofresco equipment only gets about a pound per roast. So, he was ready to size up. He splurged on a rust orange US Roaster Corp roaster that’s able to yield around 44 pounds per hour, driving all the way to Oklahoma City to make his coffee dream come true.

“It’s like a Star Wars scene with a piece of R2-D2 there and parts over there,” Ramkissoon said. “It was a metal shop, not a showroom.”

He chose the roaster because it works on a combination of electricity and propane. Less gas is used, but there’s still a bit of fire in the roast instead of an oven-like cooker. That element — the fire — makes the coffee taste better, according to Ramkissoon.

The Brown Bear founder, who works at WellCare Health Plans and wrote for CL’s Food and Drink section from December 2008 to June 2009, doesn’t roast full time. On weekends he heads to the Ybor warehouse, which is also home to a showroom for the designs of Wolfe Architects, to help his friend Nick Cuarta build the office and roast beans. Available for purchase online as well as from Urban Bungalow's in-house coffee bar in Seminole Heights, the coffee is then sent to a Brooklyn shipping warehouse where it's sold.

While Cuarta is into designing and building structures, he says he also plans to launch a coffee shop in St. Petersburg named Beeline Coffee Co. The shop will keep classic cars and motorsports in mind — a hobby he and Ramkissoon have in common — and hopefully act as a point of sale for the roastery.

Brown Bear has been around for a year or so. Back in April, its beans were featured in a Tampa Coffee Club subscription box, and the brand also participated in September’s Tampa Bay Coffee & Art Festival.

For Ramkissoon, the annual art and coffee festival sparked an idea. Although no one showed up for his VIP class on coffee roasting, he says he’d be open to hosting a lesson at a neighborhood shop that supplies his coffee.

He tells CL he’s all about keeping things as local and sustainable as possible. His roaster has an air recycler that helps clean the hot air and get rid of burn-off. The warehouse’s windows are from Schiller Salvage in Tampa. Ramkissoon’s first customers were friends and people from his gym. And he’s even looking into a locally based coffee bean supplier.

But what’s his vision for Brown Bear? He wants to experiment with blends and find everyday roasts, not just something people (or he) will only drink once. Many coffee roasteries go with a single type of bean, which creates a great origin story, as Ramkissoon puts it. He says he enjoys the challenge of finding a blended roast that’s great for the long term.

“These are the only drugs that aren’t regulated,” said Ramkissoon, who plans to showcase his smaller roaster and talk about his process inside Urban Bungalow at 6 p.m. Thursday. “You have to get into it fast.”

On the other side of the bay, another operation named after a dark-colored animal has also found a hub for its coffee roasting. The new St. Petersburg roastery blends Black Crow Coffee Co. owners Deana Hawk and Greg Bauman’s passions for single-origin coffee, music and community under one roof.

One of their regulars tipped them off to the property when it became available. After hearing more about the Grand Central District building, how open it was, Hawk knew she had to see it. When she stopped by, she says she “could see the roaster” — that's when the space came together in her mind.

Right now, the building functions as a roastery, recording studio and event space. Bauman has a small roaster that does about five pounds at a time, which is equal to around 20 pounds an hour. He says he wishes they had something a little bigger, but if Black Crow’s beans become higher in demand, needing a larger roaster would be a “great problem.” Bauman, who also doesn't roast full time, roasts to stock Black Crow and Indian Shores Coffee Co., which he also owns, as well as supply custom batches for customers. Their fair-trade, single-origin beans and brews are available at the two shops alongside the usual offerings from Metropolis Coffee Company.

According to Bauman, he trained with Metropolis, the Chicago-based coffee company that “mentored [him] and held [his] hand,” as he dove into the world of roasting.

The couple says they like single-origin beans from small farms because they can control the quality and understand the beans better. Their support of local musicians, on the other hand, is influenced by their love of music and their children, two of whom are guitarists. Not only can their kids record in the new location, but other musicians can as well.

“It’s just a place for people to come in and be themselves,” Hawk said, adding that their community gathering space is especially geared toward creatives, everyone from authors to zine creators, who don't have somewhere to showcase their work.

Though people can rent out the space for their own events, Black Crow Coffee Roasting will host monthly poetry, improv and open-mic nights.