There's so much to see and hear at GMF, but here are some surefire picks to help you prep for the fest.

Nearly seven years ago, on a rainy August morning, a group of wide-eyed longtime music-loving Tampa residents gathered underneath the awning of the Tampa Museum of Art to enthusiastically announce that they’d be throwing a one-day “live music event” in the spring. I covered that initial press conference on behalf of Tampa music website Suburban Apologist and reviewed the first two iterations of Gasparilla Music Festival (GMF) as a journalist. In year three, I moved into a role as GMF’s social media coordinator to work alongside selfless board members and volunteers who set an example by living and dying not just on the scores of bands GMF did and didn’t book, but also on the experiences of the tens of thousands of people who walked through the gates.

The enduring friendships and memories I made at GMF are countless (standouts include eating Erykah Badu’s untouched rider food, drinking Dawes’s whiskey, testing lights with Flaming Lips’ Wayne Coyne and looking at '70s-era nudie mags with Deer Tick), but the most rewarding thing was always getting to see the faces of GMF supporters as they made their way around the grounds discovering new music and spending time with new friends and family. The Hillsborough River seems to shimmer a little brighter when there’s an eclectic mix of sounds making its way across the grounds. The food — provided by a hand-selected lineup of the Bay area’s best local restaurants — tastes better. GMF easily boasts the most diverse cross section of Bay area residents, but the vibe at GMF always makes it easier to get along with people you might not usually hoist a beer with.

Being a newly objective observer of Gasparilla Music Festival for the last seven months has been an interesting adjustment. I’m no longer in the room as the names of potential performers get tossed around. You won’t find me helping with onstage emcee scripts. There won’t be any fulfillment of strange band riders, and I won’t be critiquing the wins and losses as a team member. Instead, I’ll be on the other end of a notepad and computer screen keeping score as GMF chases its nonprofit mission to rejuvenate the neighborhood’s urban core by promoting local musicians and cuisine, all while continuing to promote music education in Bay area schools.

Still, there’s a lot that hasn’t changed. My curiosity about Bay area’s music scene — and the role GMF plays in it — is still as fervent as ever. You’ll definitely see me catching as many bands as possible, too. From the time the gates open, to my last post-fest drink at The Hub, here are the moments I’ll be chasing at GMF 2017.

Read: Sup, I'm Ray. A week after finding a desk, the new guy introduces himself.

Hardly anyone gets to GMF right when the gates open (although some will be there for 11 a.m. yoga), but seeing the Mt. Zion Gospel Choir open things up Saturday at noon has always been a hair-raising experience. Music is quite literally my church, and this is an intersection of the two that’ll make my God-fearing mother proud.

A local beer will go great with GMF vets Have Gun, Will Travel (1 p.m.), but boogie over to Kiley Gardens where Lawrence (1:45 p.m.) drops off an early set of blue-eyed soul & pop. Ukulele-wielding Bay area songwriter Ari Chi (2:45 p.m.) is not to be missed, and fans of the Stones need to draw a gigantic circle around jailhouse tattoo-loving Chicago wise guys Twin Peaks (3:15 p.m.), who return to Tampa after a sweaty good time at Crowbar in September.

Old-school Missy Elliott collaborator Nicole Wray is experiencing a classic soul resurgence as Lady Wray (4 p.m.), but do sneak away to catch a song or two by St. Pete producer Pajamas, who might be the Bay area’s best new artist. GMF’s New Orleans connection gets renewed thank to a set by the Dirty Dozen Brass Band (4:45 p.m.), while former Justin Timberlake bandmember Brenda Radney leads her garage soul band The Sh-Booms (5:45 p.m.) through a nostalgia trip of their own. A trio of locals create a major scheduling conundrum (QueenOfEx, Bangarang and Rogerthomas, who all play between 5:45-8 p.m.), but the more staggered quartet of festival closers (Grammy winners Cage The Elephant, Wu-Tang’s Ghostface Killah, Venezuelan fusion outfit Los Amigos Invisibles and producer Michal Menert) provide enough elbow room for you to close Saturday out in style.

Sunday always makes for a bloody Mary morning, and GMF 2017 once again eases into Day Two with lots of kids' programming (including an afternoon set from recent Grammy winners Secret Agent 23 Skidoo). Be there by 1:45 p.m. though, because Phoebe Bridgers is playing an intimate set that you’ll regret missing — NPR is already saying she may be 2017’s best new artist. Rising country star Kelsey Waldon (2:15 p.m.) then picks up where 2015 GMF artist Margo Price left off, and Karl Denson’s Tiny Universe will spread out for the jam-band fans (2:45 p.m.). More promising Bay area locals make chilling at the small stages appealing (emcee Jinx, Americana old guys Band of Sorrows and garage rockers Veiny Hands), but those interested in roots music will be camped out at the main stage, where an unheralded Jamaican reggae star (Chronixx) warms thing up for GMF’s big coup, Ryan Adams, who arrives supporting a heartbreaking new album that many critics are calling an instant American classic.

There’s undoubtedly an impossible amount of music to consume at GMF, but don’t get overwhelmed. Have a plan (plus drink lots of water), and don’t get flustered if things start to get hard to keep up with. Every single corner of GMF has an element that will make you fall in love with your city. Take the time to stop, sip your beverage and take it all in. Putting on a music festival is near-impossible these days (and many booking agencies have even developed separate “festival divisions” to maximize profits), but GMF remains committed to giving locals and visitors alike the affordable, expertly curated lineup they deserve.

Listen to a Spotify playlist featuring GMF 2017 artists, and see a site map, below. The most up to date schedule is available here. 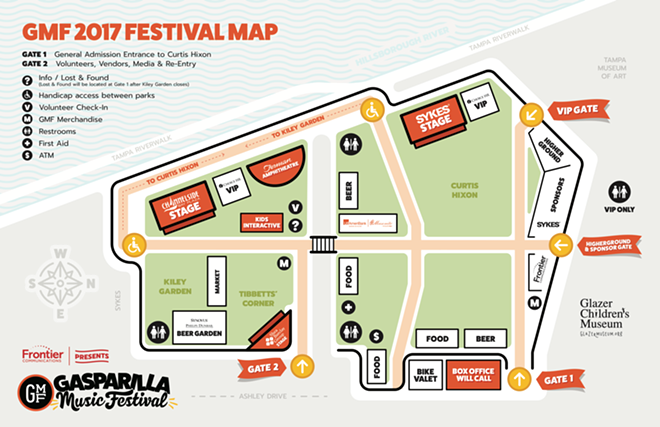