Wolfing it Down: Smokin' J's is a slam dunk

The region's favorite punk-rock wolf pack tears up the grub at Smokin' J's BBQ in Gulfport. 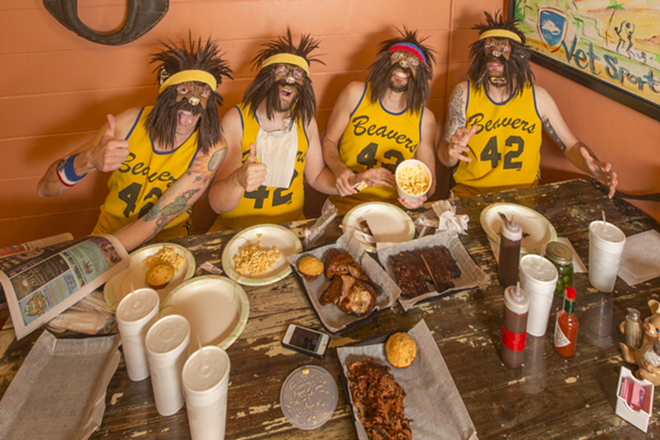 Chip Weiner
WE’RE LYCAN IT: The mostly carnivorous connoisseurs of Wolf-Face at J’s.
Gulfport’s Smokin’ J’s Real Texas BBQ is headed into its fifth year of business, but you can bet this is the first time the staff has seen Wolf-Face, a four-piece band of lycanthropes, walk through its doors. This is our furry pack’s first piece for “Wolfing it Down,” our new monthly restaurant review column, so follow the series as we chow our way through Tampa Bay barbecue eateries.

Slinging ’cue inside a former Gulfport Boulevard residence, Smokin’ J’s is a quick trip from our wolf den in downtown St. Pete. The restaurant’s casual, no-frills interior reflects what diners likely expect of a Southern barbecue joint, where the emphasis is less on urban-chic decor and more on the quality of the grub. However, the taxidermy hanging on the walls is slightly nerve-racking. We wonder whether being sent here is an elaborate trap, and if Smokin’ J’s foresees smoked werewolf limbs as its New Year’s special.

The team working the grill and counter seem to enjoy our visit, sharing a few laughs at our expense. But hey, we’re used to it. It’s not every day you meet a real-life werewolf, let alone four (including the one who inspired the ’80s movie classic Teen Wolf). Our orders are served up remarkably quick. Trays of rib racks, chicken and pulled pork are among the fare we feast on, and after a weekend of wild shows on the road, Smokin’ J’s hits all the right spots.

Chip Weiner
A finger-lickin' spread of ribs, chicken and pulled pork.
Sweet and meaty, the protein offerings are top-notch, the sort of tasty prey we dream about. The smoked pulled pork (we ask for a pound) is Michael J. Wolf, Good Wolf and Wolf-Fart’s favorite, paws down. Covered in a deliciously sweet sauce, it’s melt-in-your-mouth heaven. The smoked barbecue chicken, served half or whole, is tender and juicy. Good Wolf looks to have enjoyed the ribs a whole lot, too. He has a large pile of bones in front of him long before the rest of us clear our plates. He even manages to get one stuck in his fur — maybe he’s saving it as a snack for later. The rib meat, a nearly perfect balance of tenderness and char, has no fatty hunks, and is glazed with the restaurant’s special sauce.

Rain-Wolf is probably the only vegetarian werewolf in the world. He goes straight for the baked mac and cheese, which is wonderfully warm and gooey, unlike the dried-out stuff you find at other spots. The jalapeño corn muffins pair well with the noodles’ cheesy goodness, and everything else we wolf down. They have just the right amount of peppery kick and corny sweetness to top off our meal.

Thankfully, no werewolves were harmed in the making of this review. Smokin’ J’s lets us leave with our lives; no wolf traps sprung this time. And we’ll definitely be back. They must be counting on it.