The cultural icon, trailblazer and hero will be an inextinguishable fire forever. 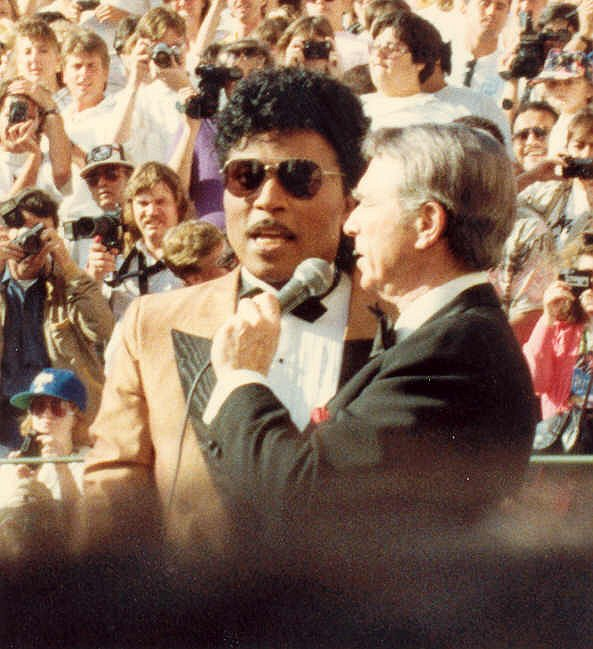 photo by Alan Light : CC BY (https-::creativecommons.org:licenses:by:2.0)
Little Richard being interviewed by Army Archerd on the red carpet at the 60th Annual Academy Awards.

So, imagine, if you will, the hatred and bigotry that must have been hurled towards a young Black man who made his magnificent and splashy debut as a charismatic and energetic singer and performer in the mid-50s. At a time in history when Black people weren’t allowed to coexist in the same circles as white people, it might not have been the smartest or best idea for this flamboyant performer to surface. But thankfully, he had the courage and the wherewithal to do so.

That was Little Richard, who died today, at the age of 87, as a result of bone cancer.

The effeminate and boisterous performer was more than just that. He made waves. Whether the public realized it or not, he brought excitement, sexuality, colorfulness and panache to rock and roll like no one else had done before. Sure, Elvis Presley would instantly become a sex symbol and the subject of idolatry at around the same time as Richard’s arrival, but it was the Macon, Georgia native who’d truly be the one to add a sense of unadulterated joy and abandon to this new genre that was in its infancy. It was Little Richard who so coyly and so stealthily threw innuendos and double entendres into his lyrics and his exuberant stage shows.

To say that Richard Wayne Pennimen, the man who’d create his unabashed Little Richard stage persona, knocked down walls and broke open doors would be a gross understatement. The man bulldozed buildings each and every time he screamed, hollered, sang, crooned and cooed while bashing out the best boogie woogie piano work the public had ever witnessed. His courage and his sheer audacity were just as pivotal as the mountain of essential music he made throughout the 50s and beyond.

His influence was immeasurable. Any rock frontman who ever teetered on the fence of sexuality, androgyny and homoeroticism unquestionably owes a debt of gratitude to Little Richard. Countless interviews and quotations from the likes of David Bowie, Marc Bolan, Elton John, Freddie Mercury and Mick Jagger reveal those artists’ reverence and gratefulness for Little Richard’s presence. The entire genre of glam rock, the extravagant and glittery movement that took over British airwaves in the early 70s, could not have existed if it weren’t for the style, the makeup, the swagger and the attitude Richard oozed. Who could resist songs like “Tutti Frutti,” “Lucille,” “Rip it Up,” “Slippin’ and Slidin’” and so many other bursts of blatant rock and roll vibrancy delivered by this irresistibly engaging dynamo?

While Ricard was, at times, shrouded and veiled when talking about his sexuality, it only proved that he didn’t have to define the essence of what arguably made him the most compelling rock and roll performer of all time. He’d at times throughout his existence denounce homosexuality but, it didn’t matter; the color, gender and sexual lines he’d broken down and blurred since the first time he simultaneously zoomed up rock and R&B singles charts at the dawning of the birth of rock and roll had more impact than any words he’d utter in the press or in later interviews.

The one and only year I attended the South by Southwest music and arts conference in Austin, Texas in the mid-2000s, I was elated to find that Richard had been selected as the keynote speaker for the event. The prestigious spot is usually reserved for wise, influential and fascinating figures who are able to openly and candidly discuss and converse about the businesses they’re involved in: the perfect vehicle for Little Richard to shine.

The speech was scheduled for an hour’s duration and, in this case, was designed as an interview with renowned rock critic and writer Dave Marsh hurling questions at Richard. If I remember correctly, Marsh managed to squeeze in two questions amid Richard’s rapid fire and enthralling nonstop, 60-minute barrage of remembrances and anecdotes relating to his rise to fame and his place in music history. He reiterated the importance of young and developing artists reading contracts carefully and being prudent about getting paid what they’re rightfully owed. Without coming out and admitting that he’d too been the victim of bad contractual agreements and getting stiffed on record royalties, his wise and insightful words spoke volumes. I sat in the third row from the stage in the auditorium where the conversation took place, and I reveled in the presence, the intelligence and the ever-present sass and confidence one of my rock and roll heroes still exuded.

This was no ordinary man, performer or star. This was a man who turned every convention on its ear at a turbulent time when it wasn’t only rock and roll that was being eschewed by society but a time when race relations were tumultuous and strained. Did that stop Little Richard from being as lively, buoyant and animated as he possibly could be? Not in the least.

Passing away today at the age of 87 due to bone cancer, his passing will be widely regarded as the death of an important figure from rock music’s burgeoning heyday in the press, this is far more than that. The passing of Little Richard symbolizes the loss of a cultural icon, a trailblazer, a hero and an inextinguishable fire that will never fade or wither. With his health suffering in recent years, Richard kept a low profile and remained silent over the last decade or so.

Farewell to Little Richard, the legend; the man who could make us dance, feel proud of who we are, let go of our inhibitions and feel the magic of rock and roll music all within the context of a three-minute record.