Climate change should unite America, but we have to fix our failing democracy first 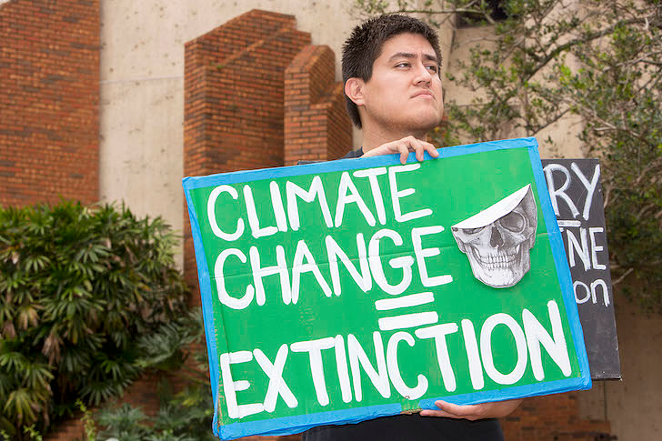 A climate change demonstrator in Tampa, Florida in April 2019.

The 3,949-page report the Intergovernmental Panel on Climate Change (IPCC) released on Aug. 9 leaves little room for optimism: Things are bad. They’re going to get worse. They might get catastrophic. (And in case there’s still a question, the report says, the problem is “unequivocally caused by human activities.”)

“Each of the last four decades has been successively warmer than any decade that preceded it since 1850,” the IPCC’s working group reports. “… It is virtually certain that hot extremes (including heat waves) have become more frequent and more intense across most land regions since the 1950s.”

The global surface temperature during the first two decades of the 21st century is about 1 degree Celsius warmer than it was from 1850-1900. To cap warming at 1.5 degrees, the world can only release 10 years’ worth of global carbon dioxide emissions.

Given that few countries are hitting their Paris emissions targets, it’s much more likely that the Earth crosses the 1.5-degree threshold in the 2030s or ’40s. If—big if—the world gets its act together quickly, we might be able to contain it there.

The bottomline: Humanity has a very short window in which to unfuck the future.

This is clear as a bell. We know what we have to do. We have the technology to do it. We know what’s at stake: cities wiped from the map, agriculture destroyed by drought, worldwide depressions, disruptive mass migrations, a planet in geopolitical turmoil, and millions of lives lost to starvation, cyclones, heat, floods, and disease.

If ever there was an issue that should unite America—unite the world—this is it.

Acknowledging this crisis is real—we’re all there, right?—means acknowledging that we have a collective action problem. Market incentives are misaligned with a decades-long human project that requires huge investment up front with the largest shareholder benefit being a livable planet 50 years from now.

In other words, none of this happens without government intervention on a scale we’ve not seen since the New Deal. Coal mines and oil refineries will close. Gasoline will be outrageously expensive. Massive single-family homes will give way to urban living spaces in dense, energy-efficient cities with electrified transit. Companies and factory farms that release carbon dioxide and methane will face new taxes. The government will subsidize solar-panel, wind-turbine, and electric vehicle production, and perhaps plant-based protein (or lab-grown meat) companies, too.

This won’t seem fair to those whose livelihoods are uprooted. It will be incredibly disruptive.

Of course, the alternative will be much more disruptive. All we have to do to get that is nothing.

Looking at Congress right now, which outcome do you think is more likely?

Nineteen Republicans signed on to the bipartisan infrastructure deal, albeit after hacking most of its climate-related spending. Attention now turns to the $3.5 trillion reconciliation bill, which is likely to contain hundreds of billions of dollars for various climate projects and needs only 51 votes to clear the Senate.

If it passes, it will be the largest investment in fighting climate change in the country’s history and “put America on a path to meet President Biden’s climate change goals of 80% clean electricity and 50% economy-wide carbon emissions reductions by 2030,” Senate Democrats said.

At the same time, it’s not nearly enough, not compared with the scope of the problem. Yet the Democrats’ moderate camp is already squirming. To be fair, $3.5 trillion is a big number; for Dems in swing districts, it will be a tough vote.

Herein lies the rub. The more serious we are about addressing climate change like a crisis, the more politically difficult it becomes to achieve.

It’s not that the policies themselves lack popular support. It’s that our form of government is an antidemocratic anachronism that affords outsize power to white, rural, conservative states and regions—including those that benefit from fossil fuel production: Texas, Wyoming, Pennsylvania, Ohio, West Virginia, North Dakota, New Mexico, Oklahoma, Colorado.

Were representation not warped by the Electoral College, the Senate, gerrymandering, and natural geographic preferences—Democrats tend to cram into cities—Republicans probably wouldn’t use “Green New Deal” as an epithet.

If the reconciliation package is pared down, climate provisions will make a convenient target. Universal pre-K, free community college, and expanded Medicare benefits are easy to understand and make for good politics. “Rebates for weatherization” sounds like government woo-woo, on the other hand, and “provides environmental justice” will morph into “woke solar panels” by next year’s campaign ads.

Climate change is the challenge of this century, and the clock is ticking. Addressing it will require investments that won’t pay off for decades—perhaps in our lifetimes. Inaction is tantamount to a crime against humanity. Nibbling around the edges won’t cut it.

But without taking steps to fix our failing democracy—eliminating the Electoral College, ending the filibuster, banning gerrymandering—nibbling around the edges is probably the best we can hope for.