The allure of deli flavors has sparked tremendous creativity in this kitchen. 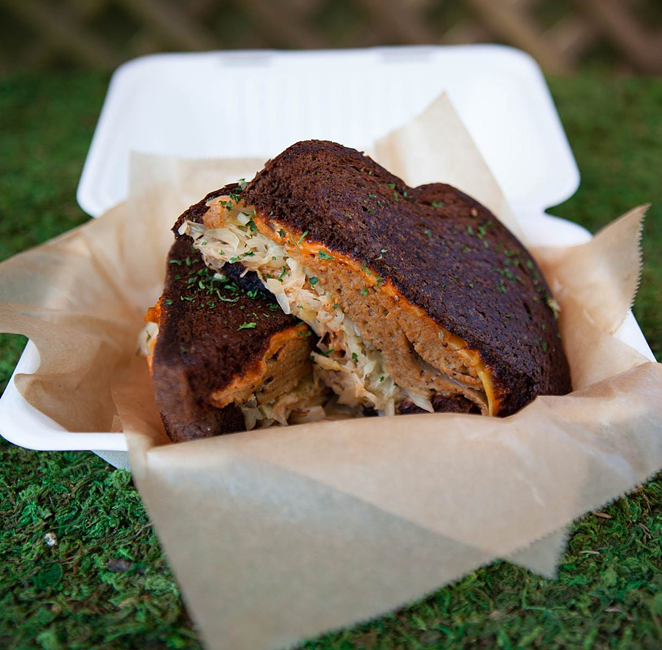 No matter our best efforts, we all live in a world of generalizations. It’s most obvious in our politics—particularly in social media where it’s easier to use labels from “libtards” to “gun nuts” rather than to engage in a nuanced discussion. This also applies to dining. In the sybaritic world of food criticism where I dream of caviar and foie gras, I always gulp (with a touch of fear) when I’m forced to confront the vegan world. Then, I remind myself that at least truffles qualify; too bad they come with an astronomical price tag.

You’d think I would learn after reviewing the splendid fare at stalwarts such as Cider Press Cafe and Love Food Central. But Golden Dinosaurs’ menu reads like a NY deli. Is it really possible to create the world of pastrami, chili dogs, and bacon without animal fat? And isn’t it a bit odd to want to? After all, veganism is not only a philosophy, but a health choice. Bill Clinton famously switched after his quadruple bypass. And CL’s readers, after all, bestowed the BOTB imprimatur on Golden Dinosaurs for two years running.

All of this is swirling in my brain as my team takes its seat on the welcoming outdoor patio at a socially distanced black metal mesh table and chairs topped with a bright yellow umbrella. GD has yet to open for indoor dining and still requires a mask to order at the walk up window, where all the drink options are displayed on shelves behind the glass. There’s Original Sin Pineapple Haze Cider, Liquid Death Mountain Water from the Alps, and the wonderful full cane sugar sodas from Boylan Bottling Co. In addition, it offers kombucha and beer on draft plus canned wine from Archer Roose. Everything is no contact. You put your credit card in a slot, choose a tip %, and then wait to pick up your order on an outdoor shelf. 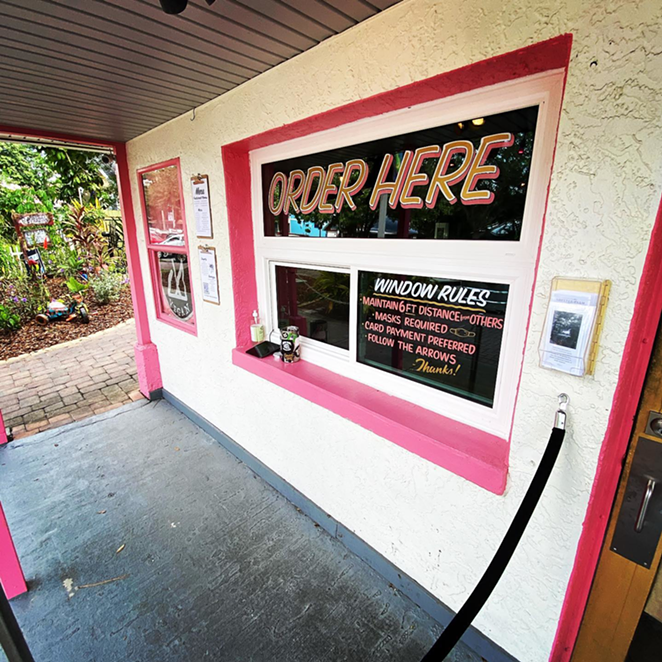 goldendinosaursvegandeli/Facebook
Golden Dinosaurs has yet to open for indoor dining and still requires a mask to order at the walk up window.

We open our goodie bag and pass around the carefully wrapped selections. The chili cheese dog uses Loma Linda brand franks smothered in house-made chili, melted Violife cheese from coconut oil, a touch of mustard plus a sprinkling of chives on a satisfying pretzel bun. If you were served this without knowing, you’d just gobble it down like a college student after a kegger. Upon close inspection, the flavorful dogs are not as shiny and firm as processed meat. But I’m amazed at how well this comes together.

As it turns out, that’s the consensus for the whole evening. Our sandwiches may not deliver the flat out umami of meat, but it’s pretty darn good. It’s clear that the allure of deli flavors has sparked tremendous creativity in designing faux meat from seitan (wheat gluten) and tempeh (soybean). Visually, the colors are not the same, but the flavor and texture is surprising.

I opt for the pastrami Reuben. The house-made pastrami seitan is thinly-sliced and stacked. It’s topped with fabulous local, hand-crafted, live culture, small batch kraut from St. Pete Ferments. Add Violife cheese and Thousand Island dressing on pressed pumpernickel, which ends up nice and crisp, and I’m quite happy. It might not drip with butter, but it’s another winner.

The French dip’s sliced seitan steak with melted Violife provolone on a toasted hoagie roll mimics the authentic version quite well. The horseradish mayo is subtle (much to the disappointment of my asbestos-mouthed taster), but the vegan au jus works. It’s obviously not beefy, but they’ve managed to create a concoction that adds taste (and moisture) without off flavors that call attention to the lack of meat products. It’s another surprising vegan twist on a deli favorite. 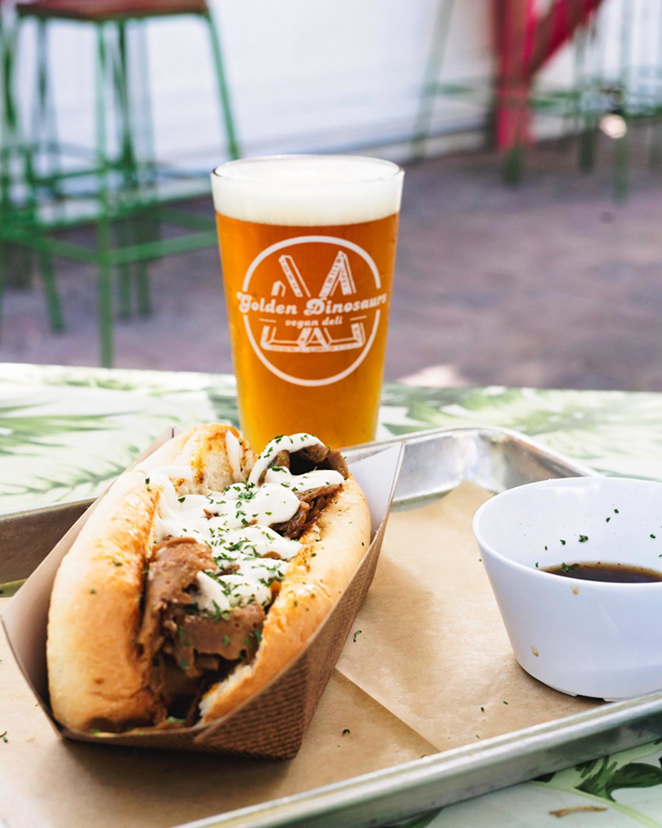 I’m not sure how you create a brioche bun without eggs, but Golden Dinosaur succeeds. Add crisp tempeh bacon, lush avocado, vegan mayo, plus shredded lettuce, sliced ripe tomato and you have the “Harvey,” GD’s version of a BLT. Once again, it mimics this classic sandwich beautifully. We also share two sides—classic potato salad with vegan mayo and a bit of mustard, and the wondrous chickpeas salad which just sings with plenty of fresh, minced dill.

For dessert, we opt for cookies over the brownie and peanut butter pie. The dark chocolate sea salt is a big hit, while the snickerdoodle is denser than a butter and egg version, but saved by a nice blend of cinnamon and sugar.

It’s always fun to visit Gulfport, there’s such a great old Florida vibe: bungalows with jalousie windows, yards overflowing with local flora, and the historic landmark Gulfport Casino, which is literally “sittin’ on the dock of the bay.” Due to its current COVID protocols, the restrooms at Golden Dinosaur are closed to diners. So we wander down to the public restrooms at the casino “watching the tide roll away” across Boca Ciega Bay toward Isla del Sol and the distant line of waterfront condos. It’s been a tasty and most satisfying visit.