'A monument to genocide': Tampa's defense of its Christopher Columbus statue is a disgrace

As Columbus Day approaches, Tampa continues to glorify a monster. 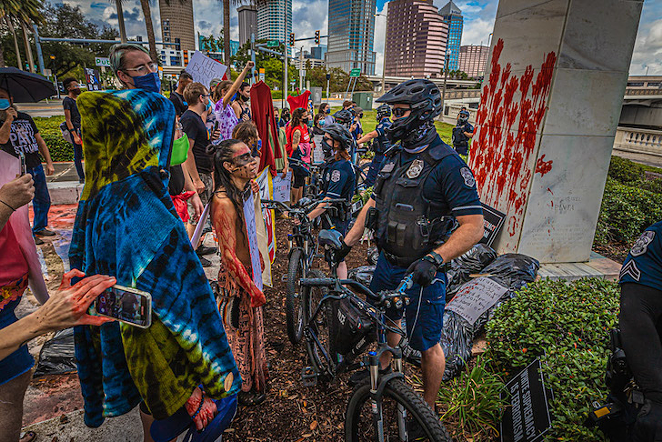 Christopher Columbus’ horrendous legacy casts a shadow over Indigenous people to this day.

The bloodthirsty admiral, who accidentally stumbled upon the Americas in 1492, was directly responsible for the destruction of Indigenous people and cultures—mainly the Arawak and Taino—in what is now known as the Caribbean.

Columbus and his crew raped, pillaged, enslaved and terrorized their way through those who rightfully lived there, ruining countless lives while attempting to eradicate their cultures.

Detailed evidence of his deadly campaign can be found in the journal of a witness to his atrocities, Father Bartolomé de Las Casas. According to Las Casas, Columbus subjected the Indigenous people to, “repeated injuries, violent torments, and unjust butcheries.”

Despite this monstrous history, an entire “Columbus Statue Park” is dedicated to him in affluent South Tampa. The monument was constructed with the sponsorship of the Ybor City Rotary Club and erected there on Columbus Day, October 12, 1953. It depicts him with a sword in one hand and an oar in the other. 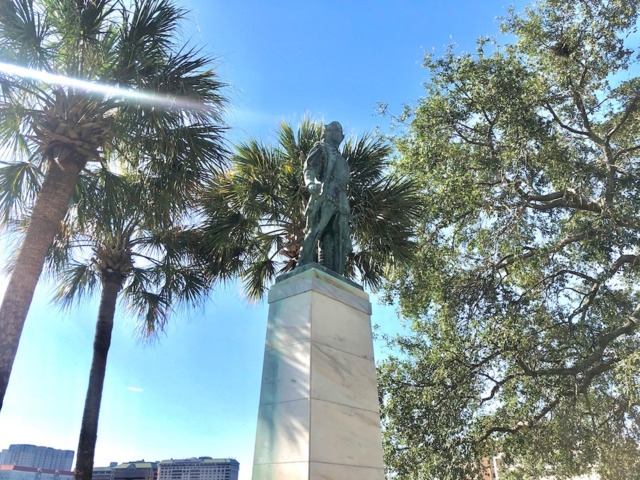 The monument glorifies Columbus and the blood that was drawn by his sword. It pridefully displays a man who slaughtered innocent women, children and men with his crew.

Columbus didn’t actually discover the United States, and had nothing to do with Tampa. More than anything, he was just a lost colonizer who went on a killing spree. Whatever mental gymnastics people might make to dress-up Columbus’ history, it’s a disgrace that a statue on Tampa city property still celebrates such a man.

“There is no statue of Adolf Hitler, not a single statue to Jeffrey Dahmer or Ted Bundy,” Sheridan Murphy, who’s been protesting the statue since 1991, tells Creative Loafing Tampa Bay. “So, it is clear that a monument to genocide against Indigenous peoples is something Tampa celebrates and honors.”

In October of last year, Murphy sent a letter to city council and Mayor Jane Castor demanding the statue be removed. Councilman Bill Carlson, who represents District 4 where the statue resides, says he looked into courses of action for the statue, including moving it to a more appropriate location.

“I had a conversation with the Mayor about options for what to do with the statue,” Carlson tells CL. “It’s the mayor’s decision on what happens next.”

While other cities across the country have had Columbus statues removed out of respect for Indigenous people, Tampa’s response to the demand for its removal was to protect the statue. The city devoted Tampa Police Department (TPD) officers to guard it day and night. That approach is in stark contrast to St. Petersburg’s removal of its Columbus statue over two years ago. 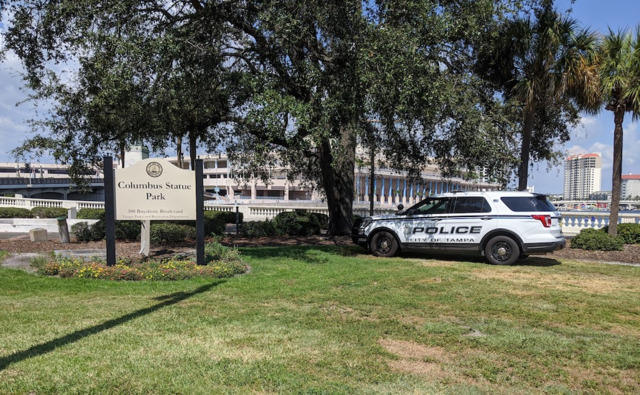 TPD told CL its squad cars were also posted there to catch speeders on Bayshore, but could not provide any information as to how many speeders were caught while they were posted. At the same time, TPD refused to pursue a driver who plowed into a Native American protester during a BLM protest and instead charged the protester with a felony. That charge was later dropped by the State Attorney’s Office.

During an Indigenous-led protest against the statue last October, TPD bicycle police surrounded the monument to protect it from protesters who had marked it with red handprints, symbolizing blood. St. Pete Cop Watch, a local activist group, found that the bicycle officers hid their identities during the protest.

Despite the outcry against the statue, Tampa seems to be adamant about leaving it standing there. CL asked the city’s communication director about councilman Carlson’s conversation with Mayor Castor regarding other options for the statue besides it being on Bayshore Boulevard, but has not yet received a response.

Because their demands fell on deaf ears, the Florida Indigenous Alliance has planned another protest against the statue this weekend on Oct. 10 during the “Indigenous People’s Day of Rage” to once again demand it be removed.

Last year Rodney Kite-Powell, curator at the Tampa Bay History Center, told CL that the City of Tampa should at the very least place a marker at the park with more context on “the incredible death brought by Columbus.” Tampa has shown in the past that the city is not above fixing problematic landmarks and righting historical wrongs. The Riverwalk in downtown Tampa includes numerous monuments to Native Americans. In 2017, a Confederate statue at the Hillsborough County Courthouse was removed and relocated to a cemetery in Brandon. In the 1920s, South Tampa had an entire neighborhood called Swastika until Adolf Hitler came around and the city was forced to rename it. And, in 1986, the City of Tampa renamed Buffalo Avenue to Martin Luther King Jr. Avenue (though we still have a Columbus Drive that should also be changed).

In a time when Native People still face heavy discrimination and an ongoing genocide in America, the pain that comes with a city defending such a monument weighs heavy. Natives have suffered more deaths from COVID-19 than any other group, are statistically more likely to be shot by police than any other race, and when Native people (mainly women) wind up missing or murdered at alarming rates, the media pays little attention.

Yet here in Tampa, the ask to remove the Columbus statue is still ignored, despite the demands of people who have suffered countless tragedies at the hands of the dangerously ignorant.